For years, two deed restrictions on the Lower East Side center required it operate as a nonprofit care facility. But the owner, Village Care—with the help of consultant James Capalino, one of Mayor Bill de Blasio’s most intimate advisers—lobbied the city to waive those regulations, and eventually sold the building the Allure Group, which flipped the property to luxury developers who had also retained Capalino’s services.

A Department of Investigations probe determined in July that the mayor’s administration had been “aware of and involved in” the process.

“We had no illusions,” said Manhattan Borough President Gale Brewer, who crafted the legislation with local Councilwoman Margaret Chin. “It was clear our city government had screwed up. We all wanted to know how and why and we all knew we needed to work together to make it never happen again.”

Brewer credited the administration with proposing some reforms but not going far enough. She argued after the outbreak of scandal around Rivington and the sale of the deed confirmation of the Dance Theater in Harlem, it was evident that the process had gone awry.

The Brewer-Chin bill requires that three separate entities—the Department of Citywide Administrative Services, a specially formed committee of administration officials and the mayor—all independently review a request before a deed restriction can be removed. During the review, DCAS would work with the Department of City Planning to conduct a land use analysis and evaluate a set of factors to determine whether granting the request would serve city interests.

The public, elected officials and community boards would be given the chance to comment at a public hearing held in the community and would be updated throughout the process.

After DCAS approval, the committee would separately assess the request, along with the preliminary DCAS recommendation and any public feedback received during the review process. The mayor would make the final approval and look to DCAS and committee reports for guidance.

The DOI report determined it was clear to DCAS all along that that Allure could seek to sell the property for condo development. The mayor has insisted the city was deceived and that an old policy was to blame for the removal.

His office endorsed the legislation.

“We worked closely with Council in drafting this bill. We support its goals and the mayor expects to sign it,” said spokeswoman Freddi Goldstein.

Chin said that as residents pass by the site, they are constantly reminded of the “broken process” that left the community’s most vulnerable without the affordable supportive home “they desperately need.”

“We are angry and millions of other New Yorkers are, too,” she said. “The legislation that we are voting on today will not bring back Rivington House. However, it will fix the most glaring problem that led to the loss of this prized facility and threatens others throughout our city.”

Both Chin and the local community board started hearing a rumor about the sale in December 2015, and The Lo-Down reported at the time that Rivington House would be closed. Chin said the city record mentioned a hearing but it “didn’t even have the correct address.”

Chin said they could have had some input if they had known about it and that Allure Group was giving people the impression that they were going to continue to operate the facility as a nursing home.

“We found out that there were discussions in the city but the message wasn’t transmitted, that this facility, the community wants it to remain as a healthcare facility and nursing home and that message didn’t get across,” she continued. “So there was all these mishaps and we could’ve caught it early if we knew about that hearing.”

Council Speaker Melissa-Mark Viverito said that the Council hopes in the future to incorporate the deed restriction process into the city’s complex Uniform Land Use Review Procedure for rezonings. The speaker’s office said that the City Planning Commission has to propose any changes to ULURP and that the Council supports making deed modifications subject to ULURP but needs input from the commission before it can act.

Still, Mark-Viverito called the legislation passed today a step in the right direction.

“The bill today is a greater level of transparency and also a more through review process and it’s open to the community boards and other entities as they may not have been before,” Mark-Viverito said. “So I believe yes that it will prevent a situation like that in the future.”

Comptroller Stringer’s office released an audit in August concluding that it was mismanagement at City Hall and poor execution of city policies as opposed to the policies themselves that led to the removal of the deed restriction at Rivington House. His findings did not directly implicate de Blasio.

In an emailed statement following a Council hearing on the bill yesterday, Stringer reiterated that the legislation would help improve the process.

“In this case, we found systemic flaws not in the current organizational process itself, but in the execution of that process,” Stringer said. “That’s what our investigation found and that’s why we believe this happened. With that said, we need to always strive for more accountability and hopefully this bill will help achieve that end. We can’t ever let a fiasco like this happen again.”

A spokesman for Capalino+Company highlighted that the company had never worked for the Allure Group, and further asserted that the firm had no part in convincing the administration to lift the restriction.

“We never represented the eventual buyer on this matter or even discussed it with them. We represented them on three unrelated projects in Brooklyn,” said James Yolles, of Risa Heller Communications. 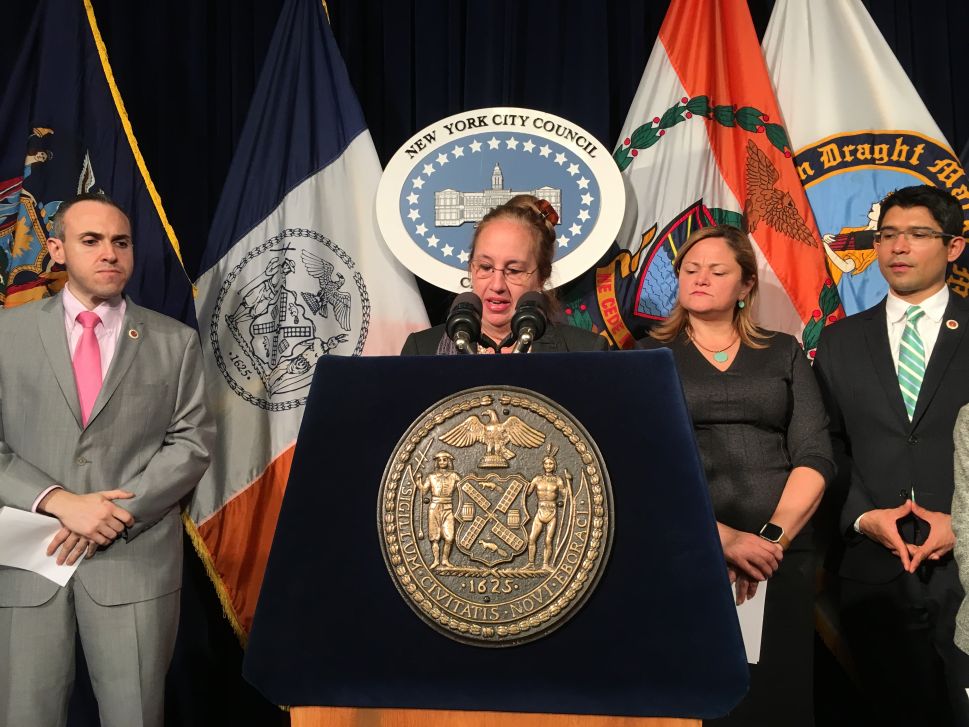