David Oyelowo (pronounced “oh-yellow-oh”) is a super-serious Shakespearean actor, Oxford-born to Nigerian parents of Yoruba ethnicity, raised a Baptist and schooled in the classics at LAMDA where he graduated with the “Scholarship for Excellence” from Nicholas Hytner. He has only been acting for 18 of his 40 years, but that’s long enough for him to accumulate 59 screen credits and a wagonload of awards, including a new O.B.E. from Her Majesty herself for his services to drama.

And, yes, he adds, confirming your fear, “you are the first person to ask me that.”

Gold, you’d think, would be a close second these days since he’s under the direction of millennium wunderkind Sam Gold while he plays Othello to Daniel Craig’s Iago.

Their whole New York Theater Workshop run completely sold out in a New York minute, and, when it officially opened earlier this month, there was nowhere to go but Broadway.

“Is possible?” you timidly ask the Othello of the moment. “That’s not for me to say,” Oyelowo demurs. “It’s a lovely thought that a lot of people want to see the play. The hope is that what we’re doing with the play is something people will respond to. If there’s more demand for it, then that can only be a good sign we did our job well.”

That—or, maybe, somebody on the marquee had the box-office clout to bring great masses to The Bard. The name is Craig, Daniel Craig (a.k.a., the eighth Agent 007).

An accomplished, stage-trained actor before being recruited in 2005 to (under) play James Bond, Craig was on Broadway twice during his decade in the British Secret Service—once with his wife, Rachel Weisz (2013’s Betrayed), and, before that, with a close personal friend, Hugh Jackman (2009’s A Steady Rain)—striking gushers both times. This is his Off-Broadway debut. Given his history, can Broadway be far away?

Seconding that suspicion is the fact that Bond producer Barbara Broccoli has been throwing “enhancement money” at the production. Does she know something?

What Oyelowo does know is that he has found a kindred spirit in Craig. “It’s actually a real pleasure to act with him,” he insists. “I’ve never worked with him before, but what we have in common is that we’ve both done lots of movies of late. Film is a fascinating way to tell stories, but what it can’t really do as well as theater is connect with the audience and reassess yourself as an actor—especially in Shakespeare. He demands that you go deeper in a way that I just don’t encounter anywhere else.

“What Daniel and I both want is to do the best version of Othello we can possibly manage. It’s work that is very challenging—not only for us but for the play. We’re trying to make it a bullet of a production. This thing goes by at lightning speed, and all of us—actors and audience alike—have to keep up. The emotions do not linger.”

Also, this Othello has been plopped down in a modern military setting. “The minute you do that, you’re not in the Elizabethan world and you definitely are not in Venice or Cyprus, so you must make sure that the play rings true for wherever you are.

“My job as an actor is to pursue the emotional truth. If anything rings false, it’s on me to fix that. The wonderful thing about theater is that you have night after night to put more pressure on yourself and on the play. And because we’re setting our play in a more contemporary setting, there are certain idiosyncrasies that were specific to 400 years ago that now have to be ironed out and made pertinent to today.”

Jealousy—the “green-ey’d monster”—is the prime mover for both characters. Iago, profoundly pissed that Othello passed him up for promotion, causes the general to imagine he’s being cuckolded. This friction has been known to spread to both sides of the footlights. In Broadway’s last Othello, James Earl Jones played the title role with great bombast while Christopher Plummer connived quietly, lightly, on the sidelines, getting laughs (and, eventually, the Tony nomination). When Jones confronted him backstage, Plummer explained grandly, “But, my dear boy, it is a comedy.” The sound that followed that remark was Jones’ jaw crashing to the floor.

“All I can say about that situation is that they were definitely at cross purposes,” Oyelowo laughs. “I’m not sure Daniel would subscribe to it being a comedy, but there are definitely things as actors that we share about the process and about the story we’re telling, just as there have to be things that we don’t—so that, over the long course of a run, we continue to surprise ourselves as well as the audience.”

The regal bearing and majestic grace he brings to the Moor of Venice comes quite naturally to Oyelowo, who actually does hail from a royal line but never realized it growing up in the U.K. When he was seven, his family moved to Lagos, and he found himself living on a street that had the family name. Oyelowo is the Yoruba word for “title has respect” (or, as he’s been known to translate it, “a king deserves respect”).

Nigerian royals are rather commonplace and come without real wealth or power, he has said, likening it to being “King of Sherman Oaks,” but “to know you came from a lineage of kings,” he concedes, “makes you get out of your bed in a different way.”

Kings, happily, are his specialty. In a landmark triumph for color-blind casting, he became the first black actor to play an English monarch—King Henry VI in the Royal Shakespeare Company’s 2001 productions of Shakespeare’s trilogy of plays about the king as a part of its This England: The Histories season. It won him the 2001 Ian Charleson Award for best performance by an actor under 30 in a classical play.

His stateside king was in Selma, playing Dr. Martin Luther King, Jr. at the time of the 1965 Selma-to-Montgomery voting rights marches. That performance got him the NAACP Image Award for Best Actor and nominations for the Golden Globe and the Film Independent Spirit Award but nary a peep from the Motion Picture Academy.

He let it slide, but when Oscar produced a second all-Caucasian acting slate in a row, he spoke up: “Generally speaking, we as black people have been celebrated more for when we are subservient, when we are not being leaders or kings or in the center of our own narrative driving it forward. We’ve been slaves, we’ve been criminals, but we’ve been leaders, we’ve been kings, we’ve been those who changed the world.”

A positive, even inspirational case-in-point is the real-life character he played earlier this year in Queen of Katwe—Robert Katende, a Christian outreach worker who coached an illiterate, 11-year-old Ugandan girl to a world chess championship.

“Unfortunately,” he notes, “it’s a portrayal—and a circumstance—we don’t get to see much in movies: A black man, an African man, who is in a happy marriage and is present to his children—but who also is self-sacrificial for his community. This, of course, happens every day all over the world with black men, but we very rarely get to see it on film. I was elated to get to play that because I know my father is that, I know my family members are that, a lot of the people I associate with and know are that. To get to represent that on film—particularly a functioning marriage and being a present father—is something I was very proud to portray because it is a truism.”

His has been a sleeper screen career. Oyelowo has been in three Oscar-nominated Best Pictures (Lincoln, Selma and The Help), supported three Oscar-winning performances (Forest Whitaker’s Last King of Scotland, Daniel Day-Lewis’ Lincoln, and Olivia Spencer’s in The Help) and done blockbusters galore (Rise of the Planet of the Apes and Jack Reacher), but Dr. King is his crowning screen achievement to date.

“Sidney Poitier is such a hero of mine,” he admits. “He just did it. His work spoke for itself. Regardless of the opposition and the challenges that come from without, if you are functioning from a place of truth from within, you just have to believe and trust that. Ultimately, you will go on to have an effect and be the change you want to see.” 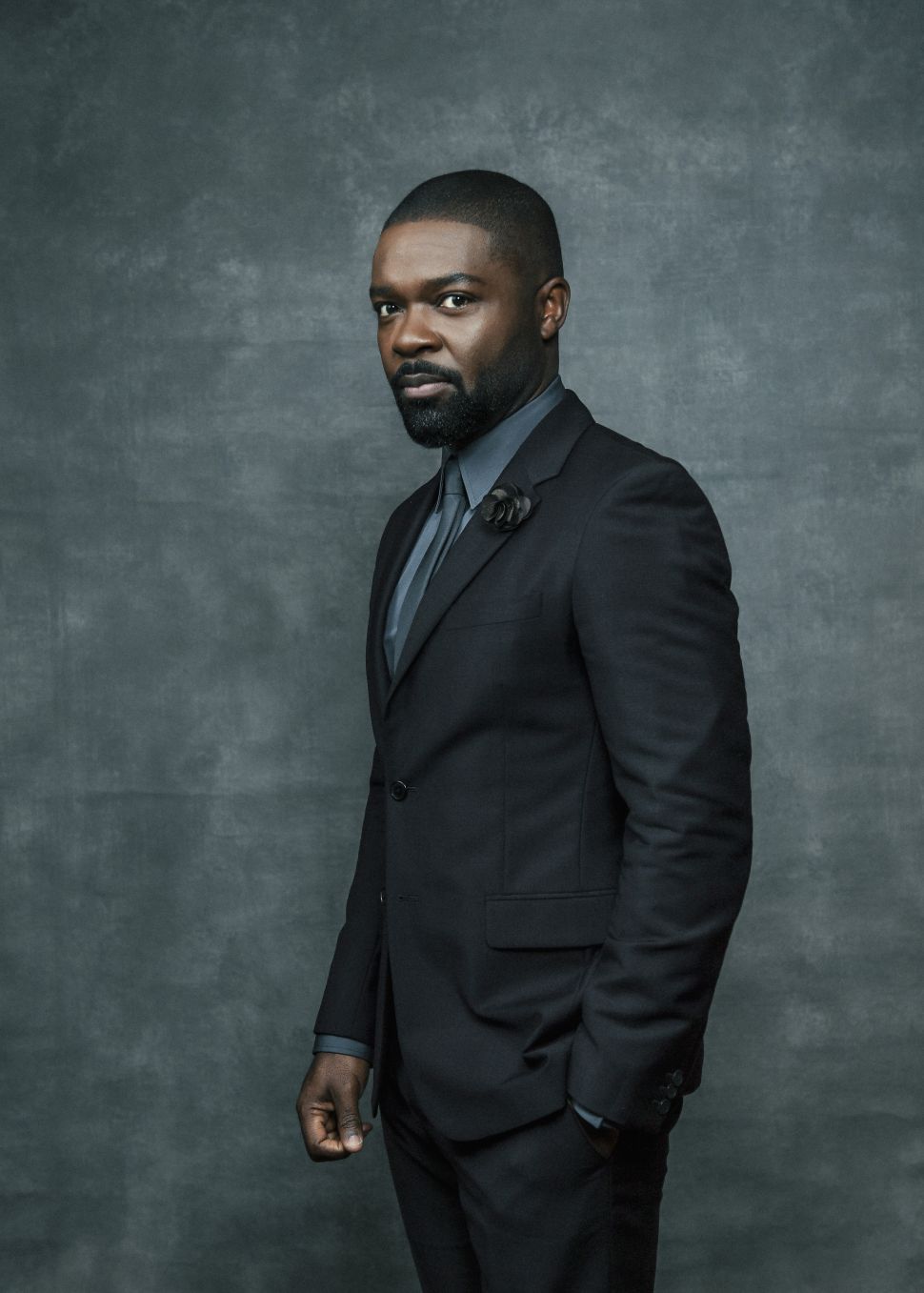