The Trump administration saw it coming. As the president and president-elect sat beside each other and pledged to work together for a smooth transition, members of Team Trump both privately and publicly warned Barack Obama against unilateral actions, especially with regards to Israel and the Palestinian Authority. A one national security advisor told Politico, “Obama and his aides shouldn’t go seeking new adventures or pushing through policies that clearly don’t match Trump’s positions.”

The Israelis, of course, also saw it coming—because the anti-Israel bile that accompanied Obama to the White House only grew more pronounced as his presidency approached its end.

In early September, the Obama administration reacted angrily to a video in which Israeli Prime Minister Benjamin Netanyahu pointed out that the Palestinian Authority intended to be Judenrein, ethnically cleansed of Jews. The State Department willfully distorted Netanyahu’s remarks, asserting he was promoting Israeli settlements, and reiterating its false claim that those settlements are illegal. In other words, the Obama administration twisted a statement about Arab bigotry against Jews into a perceived injustice against Arabs.

Later that same month, Obama delivered his final address to the United Nations General Assembly. “And surely, Israelis and Palestinians will be better off if Palestinians reject incitement and recognize the legitimacy of Israel,” he said, “but Israel recognizes that it cannot permanently occupy and settle Palestinian land.” While his words may sound to the untrained ear as if Obama were striving for balance, these two phrases could not be further apart.

The idea that peace requires an end to incitement and mutual recognition is so obvious that it should not need to be specified. But to term Judea and Samaria “Palestinian land” mocks history.

Jews lived in the area Jordan labeled the “West Bank” continuously for the past 3,000 years, save for brief periods when they were massacred, and the survivors were forced from their homes—most recently by the Jordanian Army in 1948. To now call the Tomb of the Patriarchs and the Temple Mount “Arab land” tacitly endorses Arab ethnic cleansing of Jews.

Neither petulance nor a desire to ‘get back’ at Netanyahu is sufficient to explain Obama’s behavior.

From the very beginning, Donald Trump staked out a very different position. Not only did he promise to veto anti-Israel resolutions such as the one Obama just helped to pass, but also said he would deny funding for the UN Human Rights Council until it abandons its agenda item condemning Israel and begins to actually address human rights.

After the election, Trump went further. His advisors blamed Palestinian incitement for ruining prospects for a two-state solution. He appointed a Sabbath-observant advocate of Jewish rights in Judea as Ambassador to Israel, and announced plans to move the U.S. Embassy to Jerusalem.

The bias of Friday’s anti-Israel resolution is palpable. It puts the lie to Security Council Resolution 242, which allows Israel to permanently retain some territories that it won defending itself from genocide—and places withdrawals only in the context of a completed peace agreement, with full recognition of Israel and security commitments that the PA declares it will never provide. It rewards Arab intransigence and terrorism in lieu of negotiating peace. Ultimately, it follows classic patterns of blaming Jews for the hatred directed against them.

On Thursday, Trump called for a U.S. veto of this tendentious resolution. Why would Obama inflame his ire? Why risk provoking his strong-willed (not to say, bullheaded) successor, already at odds with many of the laws and orders issued over the past eight years, to take a “scorched-earth” approach to all that Obama had executed as chief executive?

This was not simply Obama’s tantrum, as The Wall Street Journal put it. Neither petulance nor a desire to “get back” at Netanyahu is sufficient to explain Obama’s behavior.

Yet a brief look back into history places his conduct into a sad, recurring pattern. While we are reluctant to compare the Holocaust to current events, it is important to recognize that anti-Semitism is not an all-or-nothing bias, and the Holocaust was not an aberration so much as an extreme manifestation of an ongoing, dark animus.

When the Germans were losing the war, they responded by devoting greater energy, not less, to their Final Solution. Anti-Jewish hatred blinded them to logic and reason, and this helped bring ruin to the Nazis.

It seems likely to similarly ruin whatever chances the Obama legacy might have had left.

Rabbi Yaakov Menken is the managing director of the Coalition for Jewish Values, the largest rabbinic public policy organization in America. 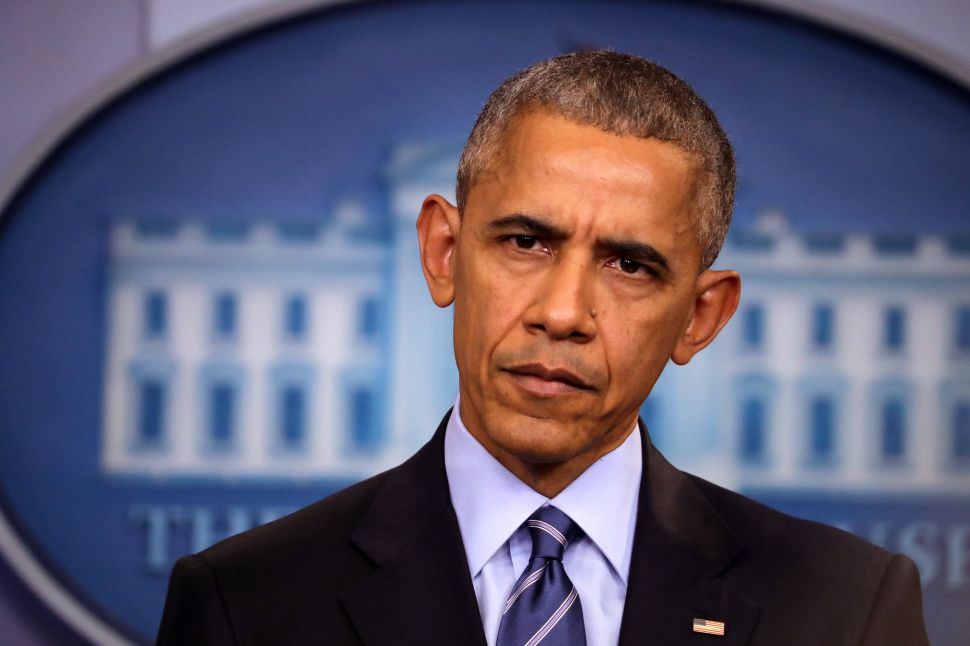