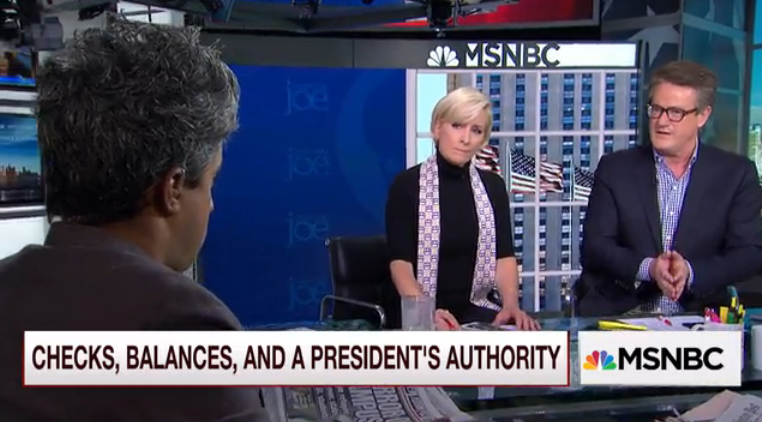 Anand Giridharadas tried to explain the sorts of fears that are spreading among people who aren’t white, Christian, heterosexual men like Joe Scarborough. Morning Joe/MSNBC

On Morning Joe on MSNBC, the guest Ari Fleischer tried to speak about the Trump transition. Co-host Joe Scarborough wasn’t pleased with what he perceived to be an interruption.

“But you never know when you stop talking,” Fleischer said.

“I actually stop an awful lot,” Scarborough said. “So let me. I will say a sentence. Then you respond to that sentence. This is how we speak at the dinner table.”

It was the kind of scolding a parent would speak to an unruly child, a tone very much in character for Scarborough, who frequently interrupts guests and recites rambling questions in gusts of words of up to 90 seconds.

And it got worse the next day, when author Anand Giridharadas told MoJo co-host Mika Brzezinski about Thanksgiving dinner in his family of color that immigrated to the United States from India. Scarborough was not on the set when the conversation began.

“My parents have been here since the late ‘70s,” Giridharadas told Brzezinski. “It was the first Thanksgiving I think we’ve celebrated with a measure of fear about the year to come. Physical fear. Fear about what will happen to people who look like us and people of many other kinds in this country.”

The election of Republican Donald Trump to the presidency stirs such fears, Giridharadas continued, especially after Trump threatened on Twitter this week to take citizenship away from anyone burning an American flag. Until now, that has been a Constitutional right.

“We now have a President-elect who is actively calling into question the right of people who are already American to remain American,” Giridharadas said.

Suddenly, Scarborough was back on the set, eager to put his guest in his place.

Giridharadas tried to explain the sorts of fears that are spreading among people who aren’t white, Christian, heterosexual men like Scarborough.

He said he feared “a terrorist attack of a particular kind . . . fills people with fear (and) gives the President a license to do things that he could not do the day before. Mass surveillance. Torture—”

Although this actually happened under Bush after the 9/11 terrorism, Scarborough decided he didn’t need to hear it.

“That fear has been over-represented in these papers,” Scarborough said, disdainfully waving a handful of newspapers.

Scarborough compared his guest to “the boy who cried ‘wolf!’” and mocked him.

“We don’t need to jump out of windows with our hair on fire,” he said. “You’re not being rational.”

“I’m not being rational for taking the President-elect of the United States at his word?”

Brzezinski labeled Warren as ‘shrill,’ a loaded and sexist word when applied to female politicians.

“Let me finish,” he demanded. “Because you know what I’m going to say and you don’t want me to say it because you know I’m right. Hitler is not coming back . . . Be careful not to spread fear if it’s not rationally based.”

On his best days, Scarborough is bellicose and disdainful of others. On days like this, he seems like a younger version of Bill O’Reilly, very much a Trump Buddy, haughty with a cruel edge, talking down to a man of color in much the tone Trump used to tell Hispanic anchor Jorge Ramos to “Go back to Univision.”

Since Trump’s election, both Scarborough and Brzezinski have been trading on their friendship with Trump and his family for leaks about appointments to the new administration. Their tone is increasingly right-wing and reactionary—even from Brzezinski, who should know better.

After showing a video of progressive Democratic Sen. Elizabeth Warren of Massachusetts—a Trump critic and consumer activist—Brzezinski said “I love her” but “I’m getting tired of this act . . . She’s just got to stop.”

Brzezinski labeled Warren as “shrill,” a loaded and sexist word when applied to female politicians. And this is what you hear on the “progressive” cable network.

Of course, it is harsher on the right-wing Fox News Channel, where a chilly message came from Gregg Jarrett.

He wrote an essay on the website—and said it on Your World with Neil Cavuto—that Hillary Clinton made a big mistake by joining Jill Stein’s Green Party request for a recount of the presidential vote in Wisconsin, Michigan and Pennsylvania.

Echoing a tune sung the previous Sunday by Trump surrogate Kellyanne Conway, Jarrett said Trump had been compassionate in saying he did not want to push an investigation into Clinton’s handling of emails while secretary of state. It is a mercy Trump may bestow, Jarrett warned, or take away.

“With a wave of his hand,” Jarrett said, “he could signal to his attorney general, ‘You know what? I’ve reconsidered yet again. Do what you think is right.’ And what do you bet Jeff Sessions will pursue a criminal case?”

Jarrett compared Clinton’s choices to holding a “get out of jail free card” in a game of Monopoly, although he twice mis-spoke the phrase as “get out of free jail card.”

“She squandered it,” Jarrett said. “She wasted it.”

Jarrett, a lawyer, seems to be under the widening delusion that Trump—elected by a minority of the voters—has been crowned emperor and can inflict his version of justice on whoever he wishes with a mere thumbs-up or thumbs-down—don’t fret about the judicial system.

That attitude of “Trump Triumphant: Get out of his way!” continued Thursday night on Fox on The Kelly File when super-duper celebrity and book-writing news actress Megyn Kelly used her show as a vessel for praise of Trump’s first stop on his “Sore Winner” tour in Cincinnati.

Kelly, who often plays the role of Mean Cheerleader, Thursday night played the rah-rah pom-pom girl with such sincerity that she stumbled for her very words as she began to read her script in a tongue-tied, gushing rush.

“What a—What a—What a speech it was!” Kelly squealed. “Optimistic! You know, at times—strong! At times, a little threatening of those who would cross America, in his view. Not dissimilar from what we heard from Ronald Reagan!”

Over on MSNBC, Rachel Maddow was a little less ebullient. She used the word “weird” five times in the first minute to describe Trump’s excessive dance in the electoral end zone.

Finally, on The 11th Hour with Brian Williams on MSNBC, Republican commentator Nicolle Wallace took a cold look at the deal Trump cut to save those 1,000 jobs at Carrier in Indiana.

With that attitude, it is a good thing for her she works nights, and not in the sunny glare of Morning Joe. 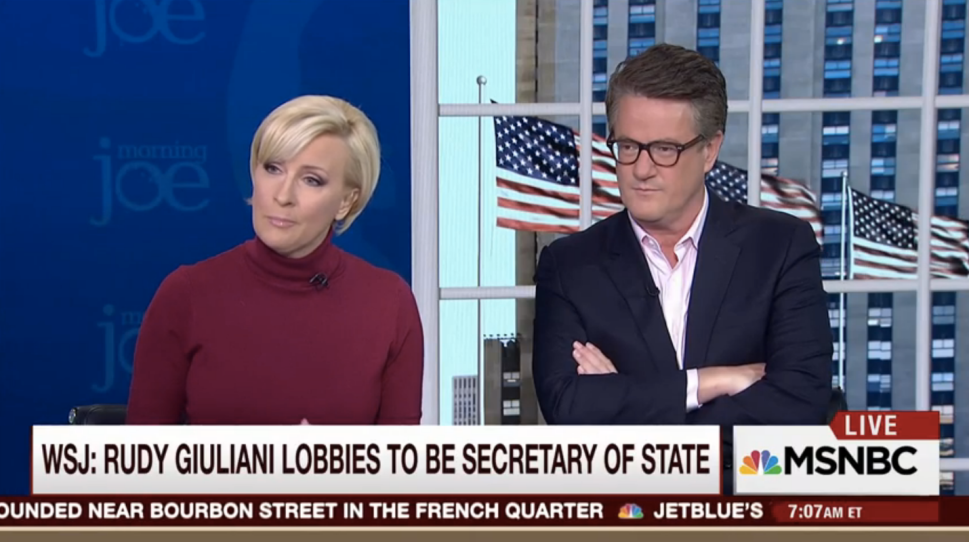