Truth can come in both funny and serious doses.

Trump and his sycophants are the only people who don’t seem to believe what the CIA and other American intelligence agencies insist is true.

On NBC’s Saturday Night Live, a skit showed “Trump” in his living room when a bare-chested “Putin” came down the chimney like Santa Claus.

“PUTIN”: “So, you trust me more than American CIA?”

This skit was replayed on Jake Tapper’s State of the Union on CNN Sunday morning. A more sobering commentary came on Face the Nation from David Ignatius of The Washington Post.

“The one thing that we really do need to know is whether there is any kind of leverage that Russia has over Donald Trump,” Ignatius told CBS host John Dickerson. “We’ve never got the tax returns. It’s crucial before he takes office—not to attack him, but to liberate him from any pressures.”

Even Fox News seems to be weary of Team Trump’s bull-headed refusal to acknowledge the meddling. Host Chris Wallace of Fox News Sunday discussed it persistently with Reince Priebus, the chair of the Republican National Committee who is about to become Trump’s White House chief of staff.

WALLACE: “Does the President-elect accept the consensus of the intelligence community?”

PRIEBUS: “Well, I think a lot of those things are coming through third parties . . .”

WALLACE: “I’m asking you a simple question: Does the President-elect accept the consensus of the intelligence community about Russian interference and its intent?”

PRIEBUS: “I think he would accept the conclusion if these intelligence professionals would get together, put out a report, show the American people that they are actually on the same page.”

After more back-and-forth, Wallace returned to the core issue.

WALLACE: “Does President (sic) Trump trust the intelligence community or does he trust the Russian denials?”

PRIEBUS: “Look, I-I-I—I think that they’re almost there except for the fact that they haven’t been totally upfront and transparent in their opinions as to who, what, where and how this all happened. And, I think they’ll get there.”

Later, Wallace launched a slightly different question, asking whether Priebus would “flatly deny” any contact or coordination between the Russians and the Trump campaign.

“Even this question is insane,” Priebus told Wallace. “Of course, we didn’t interface with the Russians. This whole thing is a spin job.”

FACE THE NATION Dickerson’s early guest was Kellyanne Conway, who also speaks for Trump’s team and holds out against the growing chorus of espionage allegations.

When Dickerson asked her what Trump might know “that all these intelligence officers don’t know,” Conway replied: “John, where’s the evidence?” She said the CIA should have accepted a request from the House Intelligence Committee for a briefing instead of “leaking to the media.”

‘If he’s so confident about the fact that this didn’t help him get elected, then what do they have to hide?’

Dickerson then asked “Does his entire team have this same view—that there is no merit to the idea that the Russians were involved?”

Conway responded by attacking Democrats for not accepting the election results. This frustrated Dickerson.

DICKERSON: “We’re not going to get any insight into the President-elect’s thinking here, but let me try this: Did anyone involved in the Trump campaign have any contact with Russians trying to meddle with this election?”

CONWAY: “Absolutely not. And I discussed this with the President-elect just last night. Those conversations never happened. I hear people say it like it’s a fact on television . . . That is just not only inaccurate and false, but it’s dangerous and it does undermine our democracy.”

Later, a Dickerson guest with more gravitas was Dr. Henry Kissinger, Secretary of State for Presidents Nixon and Ford and a political wise man of many decades. Asked about the hacking, Kissinger said:

“Nobody wants to admit the scope of what they are doing and I don’t doubt that the Russians are hacking us and I hope we’re doing some hacking there.”

Regarding Putin, Kissinger called him “a character out of Dostoyevsky with a great sense of connection, inward connection, to Russian history as he sees it. And he is a cold calculator of the Russian national interest, as he sees it.”

Kissinger, with his heavy German accent and deep voice, spoke Buddha-like from an office chair, a roundish man with a round globe behind him, just inside the camera frame. Like him or not, he is a compelling television presence, this man who once so long ago sat down with Chairman Mao.

FOX NEWS SUNDAY More than most shows, Wallace’s program examined the “Hail Mary” attempt by anti-Trump forces to urge electors to refrain from voting for Trump on Monday, when they gather in state capitals to cast their ballots.

Elector Clay Pell, a Rhode Island Democrat, said “No foreign government should be able to get away with this” and that Trump should “Change his tone and stand up against the Russians.”

Neera Tanden of the Center for American Progress speculated about the denial of the Trump team.

“I don’t understand why they don’t want to know,” Tanden said. “ . . . If he’s so confident about the fact that this didn’t help him get elected, then what do they have to hide?”

“I love all this hyper-ventilation on the left,” Rove said. “This is an effort to delegitimize Donald Trump.”

“It is extraordinary to contemplate among the pressing questions this morning: Does Trump even believe Russia was behind the hack? . . . Was his victory due, in part, to Putin’s audacious plot?”

Before long, she veered to Terry Moran, reporting from Moscow, on how Russians see President Obama.

“There’s a sense here that he is a pie-in-the-sky idealist,” Moran told Raddatz. “Somebody said he has too many beautiful ideas in his head.”

King groused that CIA Director John Brennan should have taken his charges to the committee instead of leaking to The New York Times, “a biased newspaper,” according to King, who said there should be an investigation into Brennan “and the hit job he seems to be orchestrating against the President-elect.”

Kind said: “I find it shameful and, listen, I think Putin’s evil. . . I think the Russians are guilty of incredibly evil hacking around the world . . . I’m not in any way defending Russia.”

“For the President-elect to continue to give the Russians deniability is deeply damaging to the country,” he said.

On the pundit panel, Cokie Roberts took the long view of strange bedfellows.

“To have Republicans defending Russians is one of the more remarkable things I’ve seen in my lifetime,” she said.

Kristen Soltis Anderson—reflecting on broader topics—said Republicans “know Trump may not be exactly on the same page with them and I think this is one of the debates that’s going to be fascinating to watch play out in confirmation hearings, in the first hundred days.”

STATE OF THE UNION Republican Sen. John McCain of Arizona didn’t suffer from the lack of certainty that seems to have infected Team Trump regarding Russian email espionage.

“We need a select committee to get to the bottom of it,” McCain told Tapper on CNN. “There’s no doubt they were interfering.”

‘Why is it so important to some people to express themselves in the most vitriolic and negative terms possible?’

Attorney General Loretta Lynch was asked by Tapper whether she regretted meeting with former President Bill Clinton last summer at an airport for a conversation that disqualified her from the investigation of Hillary Clinton’s emails and gave Republicans a weapon.

“I wish I had seen around that corner and not had that discussion with the former president, innocuous as it was,” she said. “You make a mistake, you own it. I do regret sitting down and having a conversation with him because it did give people concern.”

On a different topic, Lynch referred to an FBI report that showed a 67 percent rise in hate crimes against Muslim-Americans since the election of Trump and wondered about “the freedom that some people seem to feel at this point in time to just express hate.”

“Why,” she asked, “is it so important to some people to express themselves in the most vitriolic and negative terms possible?”

Van Jones, the Democratic commentator, expressed his amazement at the failure of the Trump team to acknowledge reality.

“This is baffling to anybody with a functioning brain stem,” he said. “We have to be honest about this .  . . You have an active attack on our country and  . . . the President-elect cannot find it in himself to say ‘This is wrong and it needs to stop.’”

MEET THE PRESS Chuck Todd’s panel on NBC included Jeff Greenfield of Politico who called Trump “uninformed” and said the President-elect “tends to see every issue through ‘How does it affect me?’”

Another guest, Yamiche Alcindor of The New York Times, said “I don’t know if I expect Donald Trump to say . . . ‘I’m going to spend the first 100 days in my administration looking into how a foreign government helped me into office.””

RELIABLE SOURCES Brian Stelter opened his CNN show with a video of Trump telling the kind of lie that stirs up fear and resentment.

“The murder rate in the United States is the largest that it’s been in 45 years,” Trump told his cheering, chanting mob in a stop in Hershey, Penn., last week on his Sore Winner tour. “Nobody knows that.”

Trump pointed his finger at the news media covering the event as his loyalists booed.

“They don’t tell you that,” Trump said. “Do you guys ever say that? No. they don’t say that. They don’t want to hear that.”

He sounded like a demagogue stirring up blood vengeance. Only one thing was wrong.

In fact and reality, Stelter said, the American murder rate is closer to a 45-year low. At a different rally, in Alabama on Saturday, Stelter reported that Trump said “at least seven times” that the media is “dishonest.”

Later, Stelter interviewed White House press secretary Josh Earnest in the press room of the executive mansion about threats from Trump staffers to cut back media access in the next administration.

“I hope not,” Earnest said.

Referring to Fox News, Stelter asked if Earnest ever wished to refuse those reporters admittance, the way Trump backers are suggesting for mainstream media.

“That would have been entirely inconsistent with the spirit of this room,” Earnest said.

MEDIA BUZZ On Fox News Channel, host Howard Kurtz allowed Conway to ramble on about all the Team Trump grudges with the media.

“We will be respectful to the press,” she sniffed. “We just expect the same in return. Frankly, for most of them, we’re yet to see it.”

In a scandalous rebuke of disapproval toward The Great Leader, Kurtz noted that Trump has not held a news conference since July. A normal President-elect would have held one by now.

KURTZ: “Is that going to change anytime soon?” 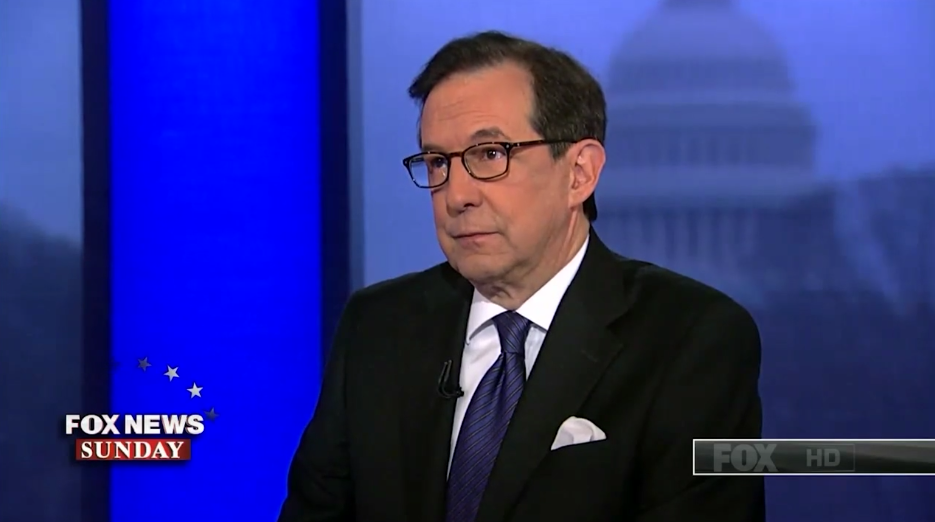