Much has been made of the large number of generals that have been interviewed by the President-elect or selected for his cabinet.

There are some that think this will lead to a militarization of our government or foreign policy.

I can shed some light on how senior generals “generally” see the world. I worked with dozens of them over the last 16 years in and out of combat zones.

I heard them talk to their staffs, commanders, bosses, civilian partners, children, spouses, critics, and the press. They defy all simple stereotypes.

Most importantly I have spent one-on-one hours and days with some of the most successful generals while traveling around the globe. In those moments when we were alone: waking up, eating, driving, riding, writing, thinking, scribbling on a whiteboard, trying to fall asleep, reading, sipping coffee, downing a beer, or just talking shit about each others’ football teams or physical fitness I studied them.

They all had more nuanced views about world affairs, the state of humanity, and warfare than any professor, politician, diplomat, or religious leader I have met.

I do not fear having selfless leaders working in our government on our behalf.

Take a moment to read the thoughts of a successful General that slipped off his battle uniform and put on a business suit.

“These opening remarks may lead you to assume that my suggestions for the advancement of world peace will rest largely on military strength. For the moment the maintenance of peace in the present hazardous world situation does depend in very large measure on military power, together with Allied cohesion. But the maintenance of large armies for an indefinite period is not a practical or a promising basis for policy. We must stand together strongly for these present years, that is, in this present situation; but we must, I repeat, we must find another solution, and that is what I wish to discuss this evening.

There has been considerable comment over the awarding of the Nobel Peace Prize to a soldier. I am afraid this does not seem as remarkable to me as it quite evidently appears to others. I know a great deal of the horrors and tragedies of war. Today, as chairman of the American Battle Monuments Commission, it is my duty to supervise the construction and maintenance of military cemeteries in many countries overseas, particularly in Western Europe. The cost of war in human lives is constantly spread before me, written neatly in many ledgers whose columns are gravestones. I am deeply moved to find some means or method of avoiding another calamity of war. Almost daily I hear from the wives, or mothers, or families of the fallen. The tragedy of the aftermath is almost constantly before me.

I share with you an active concern for some practical method for avoiding war. Let me first say that I regard the present highly dangerous situation as a very special one, which naturally dominates our thinking on the subject of peace, but which should not, in my opinion, be made the principal basis for our reasoning towards the manner for securing a condition of long continued peace. A very strong military posture is vitally necessary today. How long it must continue I am not prepared to estimate, but I am sure that it is too narrow a basis on which to build a dependable, long-enduring peace. The guarantee for a long continued peace will depend on other factors in addition to a moderated military strength, and no less important. Perhaps the most important single factor will be a spiritual regeneration to develop goodwill, faith, and understanding among nations. Economic factors will undoubtedly play an important part. Agreements to secure a balance of power, however disagreeable they may seem, must likewise be considered. And with all these there must be wisdom and the will to act on that wisdom.”

These are the words of General George C. Marshall as he accepted the Nobel Peace Prize for his humanitarian works and role in organizing the world. He was the first Soldier ever honored this way.

He is possibly the most important American of the 20th century and is on the top five list of those making wise impacts on the human race.

He mastered some of the key aspects of public service and humanity in the military. He was selfless, a strategic thinker, he mentored constantly, was known for his integrity, and was a model of true leadership not just to Soldiers but more importantly his civilian bosses.

Wise Generals know that if, if, if, as a last resort you must fight a war then you use every bit of intellect and power to do so quickly to keep the losses at a minimum. Additionally they plan not just for how to start a war but how the war must end…how to wage peace.

They also understand, more than anyone that hasn’t written a letter home to a new war-widow, the true cost of war.

Give these men a chance to show you how they lead, plan, and unite. 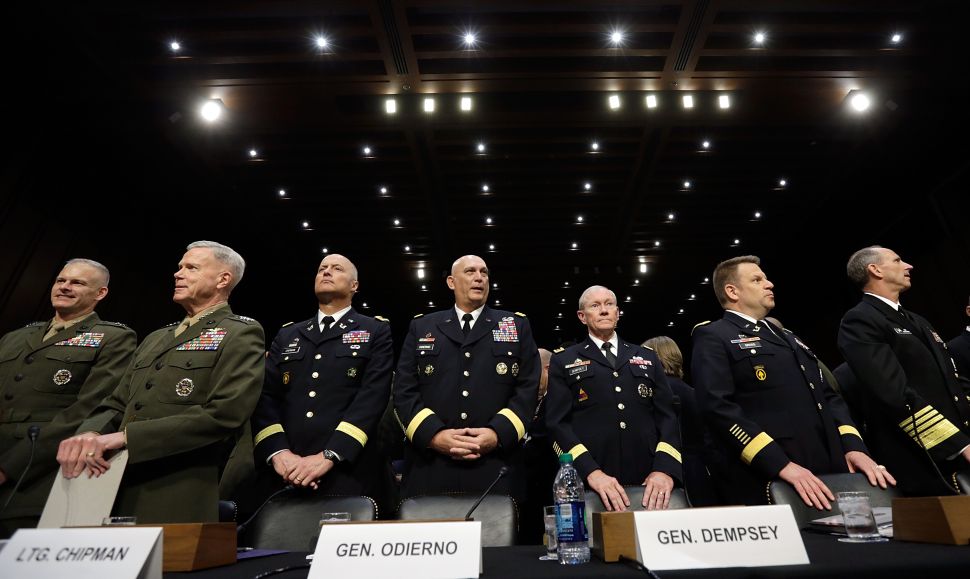