For someone like me, who’s warned about foreign espionage—especially Russian—for years, usually to little avail, it’s a pleasant change to see the mainstream media talk about so much Kremlin spies these days. It’s gratifying to witness the Obama White House, which downplayed and simply ignored Russian clandestine spy-games for almost eight years, suddenly pledge to get serious about it. That this sea-change is coming as President Obama is packing his belongings and therefore will have minimal real-world impact doesn’t mean it’s not welcome.

All the same, the emerging debate about what exactly Vladimir Putin and his spies did in 2016 to influence our elections is already politically toxic, fundamentally dishonest, and flagrantly partisan. As is now the custom in Washington, both sides are more than willing to ignore inconvenient facts when they get in the way of their preferred narrative about this year

Therefore, without delay, we need a to debunk a few of the most pernicious falsehoods about the SpyWar events of 2016. The logical place to start is the issue of Russian “hacking” itself, which is being portrayed as a grand criminal conspiracy orchestrated by Putin personally, in the bowels of the Kremlin. All that’s missing is a cat on his lap to perfect the clichéd movie bad spy-guy image here.

That’s a flawed way to look at it, however. In truth, the vast majority of the email theft perpetrated by Russian spies against the Democrats was utterly normal signals intelligence collection, what the pros call SIGINT. Russians do it, we do it—in 2016 every country that can does it. Spies steal secrets, it’s what they do. Of course espionage is illegal basically everywhere, but everybody does it. Hyperventilating about it doesn’t help.

A century ago, when radio hit the world by storm—they called it wireless telegraphy back then—countries put their communications in the ether, and their opponents intercepted them: thus was SIGINT born. It quickly became the world’s most important form of espionage, and so it remains. Today everybody puts most of their communications on the Internet, so that’s where SIGINT professionals hunt for them.

None of this is to downplay America’s desperate need for better cybersecurity, which experienced complete implosion during Obama’s two terms, when pretty much everything worth stealing online from our government and countless private corporations was purloined by Russians, Chinese and many others. That said, getting smarter about cybersecurity won’t entirely solve this problem, since SIGINT professionals will always find a way.

It’s high time for people in sensitive positions in Washington and beyond to ponder the wisdom of putting so many sensitive messages online, where they are deeply vulnerable to interception. As I stated countless times during Hillary Clinton’s slow torture about EmailGate, if you’re a high-value target and you’re sending emails into the open ether, they are being read by our enemies and rivals. It’s that simple.

The first thing Republicans must do is stop telling transparent lies.

The real issue isn’t that Russian intelligence managed to get their hands on emails belonging to Hillary Clinton and other high-ranking Democrats—they did—rather that the Kremlin decided to employ its SIGINT as propaganda to hurt Hillary and her party in 2016. That effort Putin did personally direct, and he felt confident about doing so, fearing no retaliation, because he already had the measure of the man in the Oval Office.

The task of stemming Russian disinformation like the Kremlin weaponized in our election will soon fall to Republicans, who on January 20 will control the White House and both houses of Congress. Perhaps Kremlin agitprop aimed at Washington will wane, given Donald Trump’s excessively chummy relationship with Moscow, but Republicans now gloating about the pain inflicted on Democrats by Putin ought to ponder what would happen if the Russians exposed their emails too—because Moscow surely has them.

The first thing Republicans must do is stop telling transparent lies. Trump and his mouthpieces are still denying that anything untoward happened in 2016 involving Russians, which is a blatant falsehood. Here the Trumpian penchant for bald-faced denials and aggressive doubling-down is wearing thin, fast. The president-elect has put himself on a collision course with our Intelligence Community, a game of chicken that Trump will lose in the end, and lose badly. The last president to enter the Oval Office brimming with dislike and distrust of our spies was Richard Nixon, which ought to serve as a cautionary tale.

Team Trump especially needs to stop its surrogates from mouthing Kremlin propaganda alleging that the “real” source of the Democrats’ stolen emails was an American insider, perhaps even the National Security Agency—anybody but the Russians. They likewise ought to cease taunting Democrats with complaints about their “sour grapes” that Putin helped elect Trump, which only serves to taint the new administration with even more dubious Kremlin connections than it already has.

The facts are in, and they are not flattering to Trump. Our spies are unanimous in their assessment that the Kremlin interfered with our election to help him and hurt Hillary. The fleeting fig-leaf that the FBI didn’t concur with the CIA’s assessment of Russian intentions has evaporated, so it’s high time for the president-elect to accept espionage reality.

It’s not just our spies who know what Putin did—plenty of outside experts have reached the same conclusion. Back in the spring, the cybersecurity firm CrowdStrike concluded that the culprit behind the theft of Democrats’ emails was GRU, that is Russian military intelligence, which was employing a well-known cut-out to steal emails. That assessment has been more than amplified by NSA, and it wasn’t a tough call since the Russians weren’t being subtle here. Putin wanted us to know, and using Wikileaks—which has been a Kremlin front for years—to disseminate the purloined data only pushed that point further.

It would be wise of the president-elect and his team to start acknowledging reality before they get buried under the avalanche of information about Russian malfeasance which surely will be unmasked by the coming Congress investigation of the 2016 election. However, Democrats likewise need to get smart and stop telling lies. Not content to rightly push for a serious inquiry into Putin’s spy-games, prominent Democrats are now selling the idea that Kremlin antics elected Trump and that the victor on November 8 therefore can’t be a legitimate president.

Nobody in Moscow made Hillary castigate millions of American voters as ‘deplorables’ unworthy of consideration or compassion.

Hillary Clinton is now openly blaming Moscow for her defeat at the ballot box, a claim which has been amplified by John Podesta, her top consigliere, who asserted that Putin backed Trump with Russian spy-games because he wanted a Kremlin “lap dog” in the White House. President Obama has eschewed such caustic rhetoric but likewise is espousing the idea that Russian interference played a pivotal role in the election—while naturally avoiding any mention of how his own policies encouraged increasingly aggressive Kremlin espionage and disinformation.

Such rhetoric is politically cancerous and threatens to undermine President Trump before he even takes the oath of office. While it’s understandably tempting for Hillary and her surrogates, still seething from the November 8 outcome, to point fingers at Putin rather themselves for their unexpected electoral defeat, it’s just as dishonest as Trump’s claims that Russia did nothing.

Covert action by itself cannot create political conditions, it can only exploit what already exists. Kremlin spy-games in 2016 made hay out of the political situation which the Democrats created for themselves. Nobody in Moscow made Hillary castigate millions of American voters as “deplorables” unworthy of consideration or compassion, neither did they force her to use unsecure personal email as secretary of state, then lie about it repeatedly. Her abysmal campaign was created by high-priced consultants brimming with misplaced self-confidence, not GRU.

Blaming shadowy Russians for their traumatic defeat at the ballot box is pleasing to Democrats and surely much easier than soul-searching about what when so wrong for their candidate and their party in 2016. However, it’s politically hazardous for the entire country, since it threatens to make our already polarized politics even more so. Only we—not Putin—can truly undermine our republic and its institutions, and the toxic election debacle of this year, on all sides, demonstrates how easily we might.

The urgent task at hand is for a joint, bipartisan Congressional committee to meticulously examine all available evidence, classified and unclassified, to establish what foreign entities did to influence our election this year. This complex mission must be handled in the interests of country over party, while thorough assessment of exactly how much influence covert Kremlin antics had on November 8 will prove deeply vexing, so self-searching honesty is required. The first thing our 2016 candidates and their surrogates need to do is stop lying. 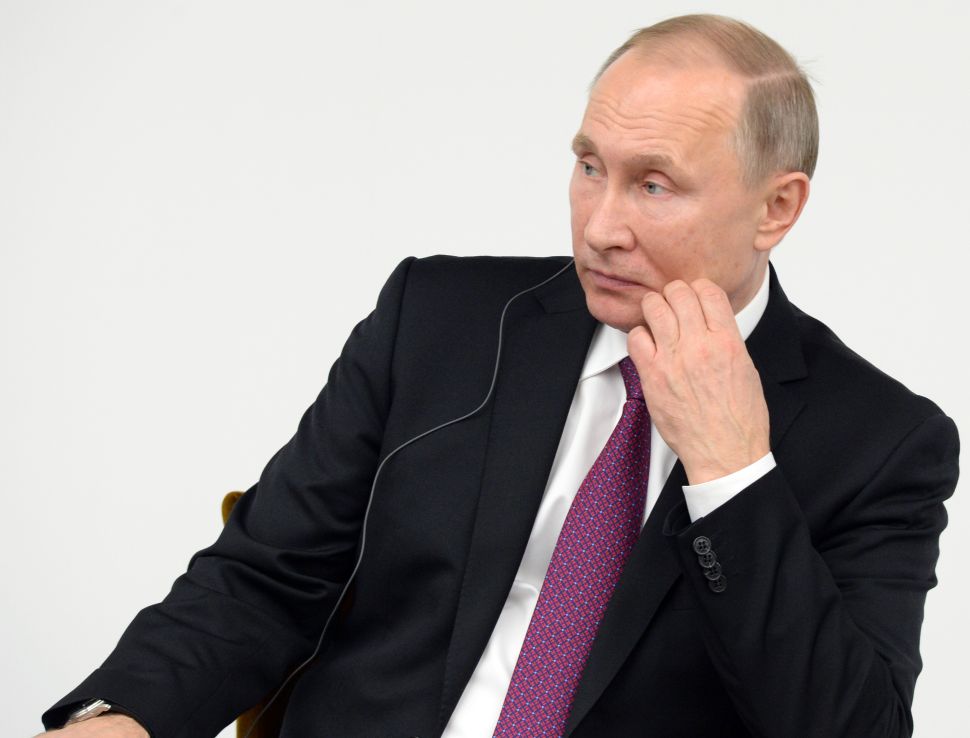