Moving forcefully between movies and theater, Michael Shannon is a convincing and resourceful actor who is now too established and viable to settle for enigmatic roles in meaningless, throwaway movies with zero possibilities for commercial success like a thing called Frank & Lola.

In this waste of time, he plays Frank, a neurotic chef in Las Vegas who is sexually involved with a recent college grad and aspiring fashion designer named Lola (Imogen Poots). Lola is many years younger than he is, so Frank is anxious. He enjoys the late hours in bed when his busy schedule behind the stove in a bloody apron permits, but he’s not a happy camper in work or play. For one thing, “Nobody knows how to eat anymore—all they want is gluten-free salads.” Then there’s the problem of Lola herself, an enigmatic slut with a past so dark and promiscuous that Frank is understandably suspicious.

Lola flirts with strangers in bars, she refuses to commit, you just can’t trust Lola, who is a chip off the block following in the platform-heel footsteps of her oversexed mother (Rosanna Arquette in a role so minor that it consists of only one scene). Frank realizes she’s a girl in danger of causing him constant misery, especially when she rarely comes home at night on time, and sometimes not at all. One night, she confesses she’s been raped by an old French lover named Alan (Michael Nyqvist) she knew during her student days in Paris. He becomes so unhinged with jealousy that he flies to Paris to track down Alan and beat him up. After Alan shows him a video of Lola in bed with another woman, Frank switches prey and follows the woman in the video. I guess it’s all supposed to be sexy and provocative, but the evening ends in an orgy, so boring it’s hardly worth mentioning.

The alleged tension mounts with a series of ridiculous and totally implausible plot twists that end up back in Vegas where Alan arrives mysteriously, lusting for Lola. Frank and Alan beat each other to sirloin tartare. By this time, Frank is so schizophrenic he no longer knows truth from fantasy. None of it makes any sense, and if you think you know how it ends when it fades to black, do send me a postcard.

As an exercise in voyeurism, this is a movie that sleeps on its feet. Shannon is too good for this nonsense, and Poots has got to do something about that disastrous name. Whoever heard of a movie star named Poots? Under the incompetent guidance of writer-director Matthew Ross, they go down for the count without any notice. It’s obvious that the reason why they all got mixed up in a debacle like Frank & Lola in the first place was an expense-paid trip to Paris. Sometimes, in the movie business, even a bomb has perks. 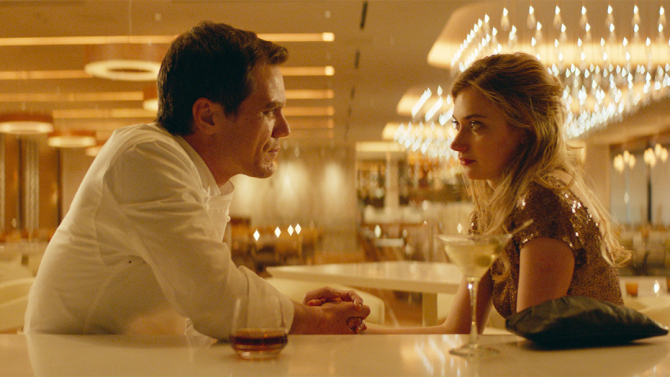