[youtube https://www.youtube.com/watch?v=rg4SF3_dlRM]
Welcome to our TV Fashion column, where TV Ate My Wardrobe‘s Emma Fraser discusses the trends in television apparel. This week: The pros and cons of matching ##gurlgroup4evah t-shirts

Losing Greg to Atlanta (the place, not the show) and ditching Josh has meant that Rebecca’s attention has shifted to her other relationships no matter what the current Crazy Ex-Girlfriend opening credits suggest. And while I am sure the narrative will circle back to romantic overtures for now Rebecca’s lady friendships are taking center stage.

Rebecca Bunch doesn’t do things by halves whether in love or platonic hangs; this means matching T-shirts complete with #gurlgroup4evah proclamations and a catchy Spice Girls inspired “Friendtopia” which blends ‘90s Girl Power with the current #SquadGoals version of lady friendships. The kind where you end up in a desert or in space wearing something shiny – maybe PVC, maybe sequins – and show off just how strong your friendship is while letting your individuality shine through.

In their version, Home Base and a war room provide the dystopian backdrop for their ode to their squad; “Friendtopia” comes complete with faux-British accents and costume designer Melina Root takes a trip back to cargo pants paired with crop tops, upper arm bangles and military inspired uniforms to create a girl group anthem for 2016.

The Spice Girls were packaged as a lot of pop acts are; through a set of defining characteristics that make them appeal to a broad audience where you get to pick which one you are most like. Pop music isn’t alone in this and Sex and the City provoked plenty of conversation with people proclaiming they are “such a Samantha.” Broad City did a good job of addressing the latter in the season 3 premiere when Abbi, Ilana and Lincoln discussed the how they are different combinations of these characters and not just a “typical Carrie.”

Crazy Ex-Girlfriend star and co-creator Rachel Bloom does the same with the characters and actors who play them when it comes to which Spice Girl they are (as well as SATC). And of course it is a mixture, because none of us can simply be boiled down to Scary or Posh; we are a lot more nuanced than that (hat tip season 1 theme song – I still miss you). In “Friendtopia” Rebecca calls herself the “brainy one,” Heather is the “cool one” and Valencia is the “sexy one” and as this is in Rebecca’s head we get to see how she views herself and her new squad.

But “Who Needs Josh When You Have a Girl Group?” does a lot more than simply poke fun at what might come across as manufactured Girl Power through selfies and matching tees. Instead we get a look at lady friendships that goes much deeper than depictions of this kind of relationship tend to. The Rebecca/Heather/Valencia dynamic plays on the fact that all three of them are not used to a tight group of besties; they’ll play along for Rebecca by entertaining what is typically thought of might go on in a lady hang – cocktails and sex toy demonstrations from Karen – and they won’t even bail when it takes a typically Bunch swing into the disastrous.

For Rebecca she is no longer juggling between guys, but friends, and her go-to BFF has drifted away from her. Part of the reason Rebecca and Paula are no longer as tight as they once were is their friendship grew out of Rebecca’s obsession with Josh. As soon as Paula recused herself from that part of Rebecca’s life (because it was super unhealthy) the cracks begun to form as Rebecca’s romantic antics dominated her life earlier this season. This meant that when Paula had her own crisis she didn’t end up telling her best friend and the whole getting her recommendation letter in late was another dent in what was originally Rebecca’s strongest relationship.

In the same way you can’t force the Spice Girls to stay together forever – fashion design really is a much better fit for Victoria than singing or dancing ever was – you can’t make people like each other. No matter how hard you try and Rebecca learns this lesson in the most dramatic Rebecca fashion with Paula getting trapped in the bathroom and therefore trapped in this nightmare scenario.

What follows is a personal revelation that speaks volumes as to where Rebecca and Paula currently stand; Rebecca thinks she was being a good friend for visiting Paula when she was ‘under the weather’ and for turning in a fabulous recommendation. However, one of those things was late (because she was too busy getting coached in ping pong for Josh reasons) and she really didn’t bother with any follow up questions regarding Paula’s sick at home day. As I mentioned last time I discussed Crazy Ex-Girlfriend, Rebecca can be such a Carrie (there I go with the SATC character comparisons) because she can make any situation about her own shit rather than asking how her friends are.

What this awkward and forced evening of entertainment does is bring everything out in the open that has been bubbling beneath the surface. Rebecca wants to smoosh her two worlds together, but this idea of a ‘girl group’ is fucked from the start as there are only three matching t-shirts and Paula really has no desire to become the fourth member. This would be like forcing Posh to stick on her old LBD and strike a “Wannabe” pose flashing peace signs all over the place (fun fact – at a sleepover we recreated the “Wannabe” video in a friend’s garden).

Paula’s homemade #gurlgroup4evah tee does nothing to bring unity and Heather and Valencia don’t really know how to react to Rebecca’s plan. Not because there are bad feelings, but because neither of them are particularly equipped in dealing with this kind of dynamic; Heather speaks her mind and Valencia awkwardly giggles in the wrong moments. Heather and Valencia are great for Rebecca, but they are terrible for Rebecca and Paula and it is hard to see exactly what will bring these former BFFs back into each other’s orbit without old tensions rearing their head. A friendship break up can be just as devastating, if not even more so than a romantic one and Rebecca’s entire West Covina set up has dramatically shifted this season.

Trying too hard is something Rebecca is guilty of and we see her mirror in Trent as he racks up a huge bill buying surf equipment to get in with Josh, White Josh and Hector as a way to get to Rebecca. It is all about crafting an image and we even see a version of the “Sexy Getting Ready Song” from Trent’s perspective. This bending of personal style to win over potential friends to get to her paramour is exactly what Rebecca did and while she’s a lot more comfortable in herself than she was a year ago, she is still not above manipulation through dress and manufactured circumstances to get the relationship she desires. Currently that is all about her girl group and Rebecca commits the same mistakes in her friendships as she does in her love life.

When it comes to what we post on social media it should be viewed through a lens that has been edited; it is snapshot not a deep dive into who we are and the images are often carefully curated. Ones that appear spontaneous are maybe the a third or fourth attempt – Gabrielle Ruiz posted the several attempts at the girl group selfie on Twitter – and hashtags that are meant to include can also alienate.

Maya and Darryl’s dance routine is their answer to getting an in on Rebecca’s hot new squad, and as awkwardly timed as this performance is it gives both Maya and Darryl the thing they have been craving, but not from the person they wanted it from. Darryl is often on the outside and even though he is now in a happy relationship with White Josh he is often envious of Rebecca’s activities with others. He yearns to be part of something and this eager behavior is often the reason people reject him and in Maya he finds a person he shouldn’t dismiss, but embrace because this is one dance that plenty want to be part of.

“Forcing friendships is weird, but forcing love is so romantic. Everybody knows that.” This sentiment is hilarious and accurately points to the lengths characters can go to in fiction without being called out on their behavior. Of course forcing anything — whether it is organized fun or pushing people together — is never a good idea, and a broken friendship is going to need more than (almost) matching hashtag T-shirts. 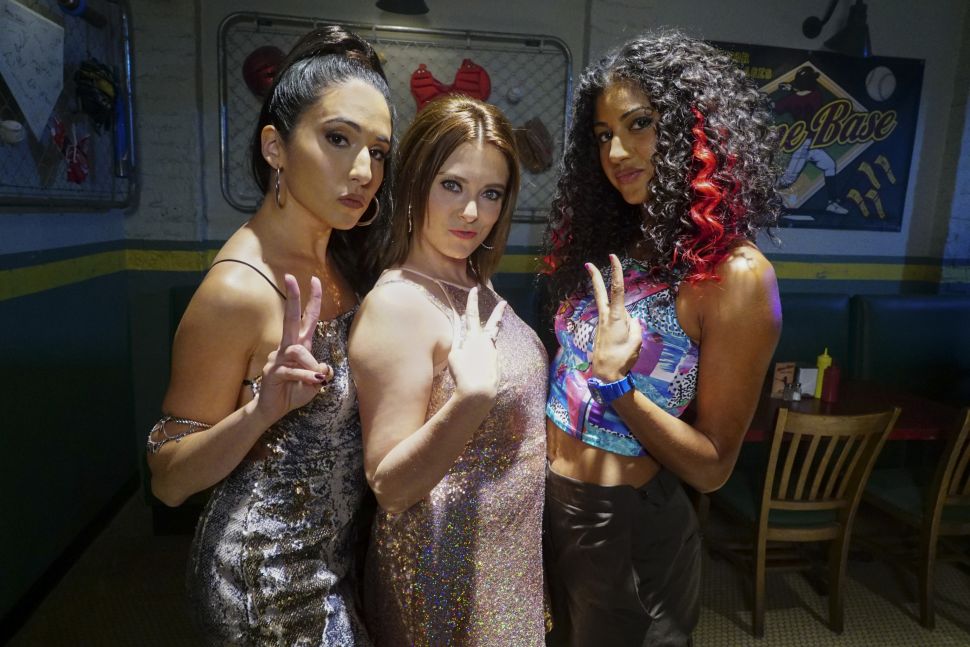