Wildfires at the edge of Great Smoky Mountains National Park in Tennessee have forced thousands to evacuate the area. More than 15,000 acres in the park and neighboring Gatlinburg, Tennessee, have been scorched by the historically unprecedented fire. Extremely dry conditions due to drought, and high-gust winds contributed to the large scale of the wildfire. Several hundred buildings in the area have been destroyed, with several injuries reported, including at least four deaths so far.

Since the 1980s, wildfires in the United States have exponentially increased in frequency and duration. According to a 2006 study published in Science journal, wildfire season has increased by nearly two months, with fires occurring nearly four times more often on a land area scale six times large, and lasting nearly five times as long.

Though natural cycles, human activities, and land use contribute to wildfires, these recent increases in wildfires across the United States pose the question as to what influence climate change has on these trends.

“We are seeing the answer to this writ large in the American west: drier, longer, hotter summers, combined with warmer winters (which allow infestations like pine bark beetle to invade and weaken trees) have already led to a threefold increase in the extent of wildfire in the American west over the past few decades,” said Dr. Michael Mann, director of the Earth System Science Center at Penn State, in an interview with the Observer. Mann recently appeared in  Before the Flood, Leonardo DiCaprio’s documentary on climate change. “We can expect far worse in the future if we do not act to reduce carbon emissions.”

Tennessee is currently experiencing its third warmest year on record, with areas in the vicinity of the fire facing rainfall deficits of up to 20 inches. More than 80,000 acres burned in early November due to drought conditions in Georgia, North Carolina, South Carolina, Tennessee, Alabama and Kentucky.

The 2015 wildfire season in the United States broke records, with more than 10 million acres burned—about 4 million acres more than the annual average. Researchers from Columbia University and the University of Idaho published a study this year in the journal Proceedings of the National Academy of Sciences that directly linked climate change to increases in intensity and frequency of wildfires in the western United States. “We demonstrate that human-caused climate change caused over half of the documented increases in fuel aridity since the 1970s and doubled the cumulative forest fire area since 1984,” the researchers noted.

By releasing more carbon into the atmosphere, the intense wildfires further accelerate climate change. If carbon emissions aren’t reduced in the long-term to mitigate the impacts of climate change, big wildfires like the one Gatlinburg, Tennessee, are going to become a more common occurrence. 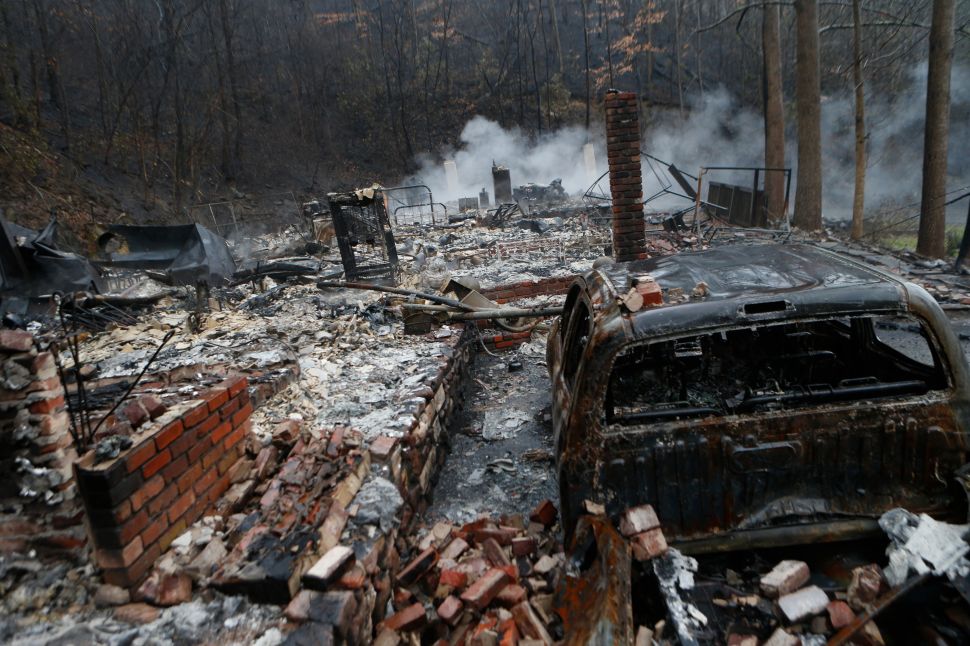