Feminist icon Gloria Steinem joined a small group of protesters outside Citibank’s biggest branch in Manhattan to protest the lender’s investment in the controversial Dakota Access Pipeline—and to urge “people of principle” to yank their money out of the financial giant’s coffers.

Steinem’s comments outside the 53rd Street and Park Avenue complex came just two days after the Army Corps of Engineers decided to deny the oil conduit a crucial permit to pass under the Missouri River a short distance upstream from the Standing Rock Sioux Indian reservation. The project’s future remains murky, especially given the approaching change in presidential administrations next month.

The Ms. magazine founder and Upper East Side resident, a Hillary Clinton supporter, argued that the election results do not preclude other kinds of political action.

“At a minimum, we have two kinds of power. We have voting power, and we have dollar power,” she said, noting that Citibank was among the earliest and largest investors in the pipeline. “We want to tell people about it, we want to encourage people to take their money out of this bank, that has been the lead bank in investing in an extremely destructive project.”

Steinem noted that the Sioux fear that the oil duct, which Sunoco plans to channel petroleum from North Dakota’s Bakken shale formation all the way to Illinois, will pollute their burial grounds and their drinking . The Native Americans and allied demonstrators have braved dogs, tear gas, cannons and freezing temperatures in their efforts to obstruct its construction.

“It goes against their historic land rights, and also it endangers the supply, not just for them, but for everybody,” she said. “We feel hopeless when we look up and see big things happening, right? But we aren’t at all hopeless or helpless because each of us has a very, very big power in our dollars and as well in our physical presence.”

The activist acknowledged the crowd outside Citibank numbered fewer than a dozen, but argued the movement was just beginning.

“I can tell you as an old person that many bigger things than this have started smaller than this,” Steinem, who turned 82 this year, said. “Everything we do matters. Everything.”

Feminist filmmaker Agunda Okeyo, who organized the multiracial event, confronted building security and emphasized the need for everyone in earshot to stop doing business with Citi.

“We are asking that people who have accounts with Citibank to close their accounts,” she said. “If we can go after the people who are investing in Standing Rock, we can go ahead and completely defuse the pipeline.”

The company did not immediately respond to requests for comment. 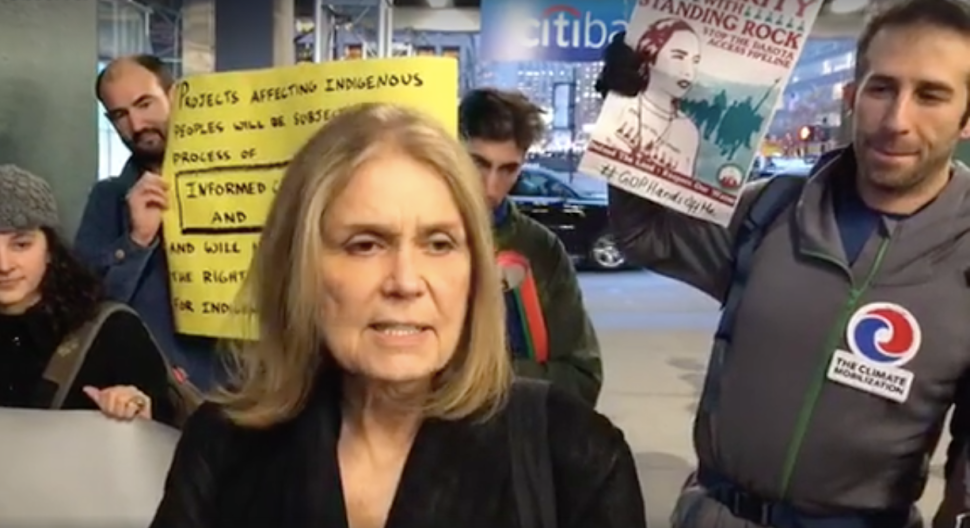