If you’re struggling with all the sci-fi weirdness of Westworld and never quite got Orphan Black, you will love the straightforward thrills of Goliath. As a worn-out lawyer with a complicated domestic situation and a motel-room apartment, Billy Bob Thornton’s Billy McBride is all humble approaches and quiet rumination.

The story centers around the death in a boating accident of a worker from a secret weapons program. Originally decreed an accident, a small-time claims lawyer, the ambitious Patty Solis-Papagian (Nina Arianda) is told of a discrepancy in the case by the dead man’s sister. Ultimately, this leads McBride to take on the corporate monster of the deceased’s employers and their lawyers.

So many one-on-one conflicts exist in Goliath besides the main plot, adding a depth to the show that feels rare. Like other decent, recent shows, some of the best lines go to powerful female characters played by, among others, Maria Bello and Molly Parker. Excellent performances by Arianda and Olivia Thirlby as two young female lawyers battling it out in life and the courtroom, add to the mix. Tania Raymonde is visceral and touching as Brittany Gold, McBride’s friend and a prostitute trying for redemption. Arianda ultimately almost steals the show from Thornton as the gritty, plain-speaking Patty. Lucille Ball-like in appearance and sharing the late great’s comic timing, she adds a surprising touch of comedy, lifting the show up and away from the mundane.

All the way through Goliath you are rooting for McBride’s ramshackle gang of underdogs; rattling off to court in his vintage, open-top sportster, there seems little hope for success against his former partner and nemesis, the facially disfigured Donald Cooperman (William Hurt). This evil legal eagle resides high up in his aerie —a darkened penthouse atop his company’s offices— where vulnerable employees are summoned to explain themselves in scenes reminiscent of American Horror Story: Hotel, adding another, darker dimension to the show.

The one flaw concerns Cooperman and his sexual magnetism to his attractive, female employees. Disappointingly, this plot device poses bewildering questions about the validity, after all, of some of the female power in the show. (Note to the producers). But nothing is perfect, is it? Thrilling, binge-watching-wise, Goliath almost is.

All episodes of Goliath are available to stream on Amazon Prime. 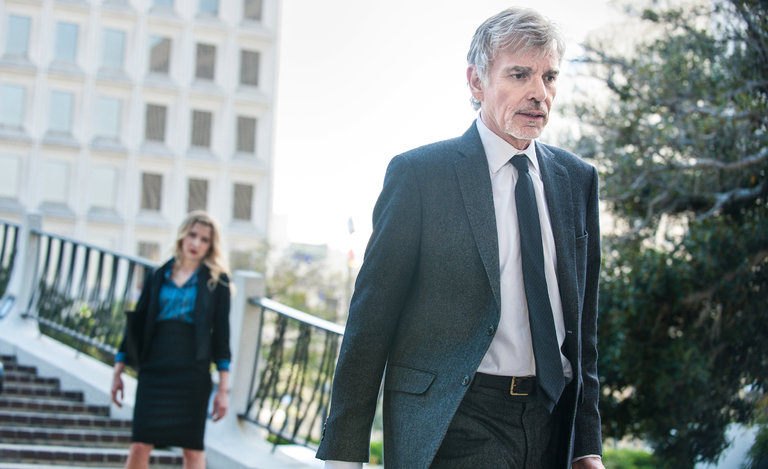