As it turns out, Guillermo del Toro — visionary filmmaker and creature-creator extraordinaire — doesn’t exactly set objectives for himself like the rest of us. “Six years ago, I gave myself one goal,” the director told a table of reporters earlier this year at New York Comic Con, his guttural accent distinct even over the backstage hubbub of Madison Square Garden. “I said to myself, ‘You’re going to write a TV series, you’re going to write a novel, you’re going to do a video game, and you’re going to do animation, so you can learn everything about every form of narrative.’ Just to discipline myself.”

Before I could point out that this “one goal” was actually four separate and very, very ambitious goals, I realized there may be no difference to del Toro; be it in the Hellboy series, Pan’s Labyrinth, FX’s The Strain, the writer-director has shown a knack for taking every-day society’s logical, best-laid plans and exposing the twisted, dark fantasy just under the surface. Case in point: Netflix’s Trollhunters, a 26-episode animated series co-created along with Dreamworks and Marc Guggenheim (Arrow, Legends of Tomorrow), featuring voice-work from Kelsey Grammar, Ron Perlman, Steven Yeun and Anton Yelchin. The story, based on a book del Toro co-wrote with David Klaus in 2015, follows 15-year-old Jim Lake Jr. (Yelchin) and his discovery of an entire society of trolls living just beneath his suburban hometown.

It’s a story del Toro has delighted in bringing to Netflix. “This has been, without a doubt, one of the best creative experiences I’ve ever had. Maybe the best creative experience I’ve ever had,” del Toro said, noting the well-known autonomy offered by the streaming network. “We can guarantee freedom to the creators — the animators, the story heads, the story-boarders — so they basically come to us, and they come with their best work. It’s very protective, creatively,” he said.

Despite the room to flex creatively, though, no series can beat the limits of the budget. Del Toro laughed in genuine, jolly amusement when I asked if he enjoyed the unlimited freedom offered by animation, as opposed to his usual practical effects. “What freedom?” He responded. “At the beginning of the season, we argued about how many cars we have. Do we have five cars, and three types of trees? Or seven cars and eight types of trees? Because you’re modeling, and you’re rendering, and you’re paying people to do that.

“But I love animation,” he continued. “I made this series because I wanted to have an un-ironic, humanistic, beautiful series to watch on a family morning. Very much how [del Toro-produced] Book of Life was for me, which is a lovely movie full of life. [Trollhunters] is that, as a series.”

Despite the talk of trees and cars, there was one aspect of Trollhunters del Toro remained staunch on. Following Yelchin’s tragic death earlier this year, the series creator refused to start over, instead reworking the entire series around the performances the late actor had already recorded. “We didn’t go into a meeting, or make one call. I said ‘we’re keeping it,'” del Toro remembered. “[Yelchin] was proud of what he did, and we were so proud of how he did it. I’m a a father, so to lose somebody that young, it hits you in a very brutal way.”

Trollhunters will mark Yelchin’s final performance, a sad footnote to a series filled with heart, practically brimming with imagination both visually and story-wise. It’s a blend of sound and color that, funny enough, could only come from animation. “I originally pitched this as a live-action series; I said, ‘I want to do kids vs. monsters.’ Too expensive,” del Toro recalled.

“Then I co-write a book for young adults, so that people can at least be exposed to the universe. I make a deal at Dreamworks, we start developing it as a feature. Then, they say, ‘would you like to turn it into an animated series?'” del Toro threw up his hands. “I go, ‘Absolutely.’

“Does that sound like the logical road?” He asked, genuinely amused that such a thing could even exist. “Fuck no. But it’s the road where it happened.” 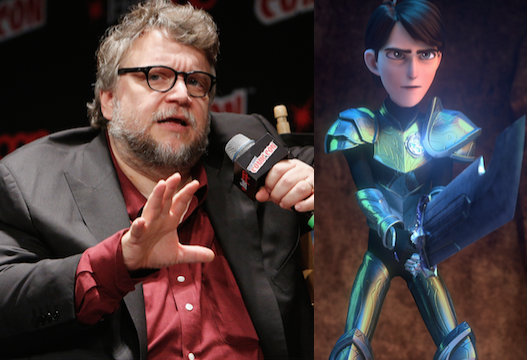