When it comes to fashion history, the bomber jacket has an incredibly interesting background, spanning nearly 70 years. Long before it was a must-have for “it” girls, like Gigi Hadid and Kendall Jenner, sold at retailers ranging from Topshop to Net-A-Porter and seen on celebs, street style stars and even on the runway, it was a very different sort of uniform.

The bomber jacket first emerged during the 1940s in various styles of leather, often topped with fur collars or in a waterproof nylon iteration—made for the utilitarian purpose of keeping WWII pilots warm in cramped cockpits. The A-2 and B-15 (named after bomber planes) were two styles of jackets released for pilots during this time. which serve as inspiration for the modern bomber jackets seen today.

Just look at any number of celeb style photos and you’ll likely see someone wearing the most popular bomber jacket of choice today: an Alpha Industries jacket. Alpha Industries’ classic jacket is most similar to the MA-1 jacket, which was first created by the U.S. Air Force in 1949. Known for its warmth, quality zippers and pockets, plus a signature orange lining for visibility during a rescue, Alpha Industries received a contract in 1961 to start manufacturing the jackets for the U.S. military. It wasn’t until the 1970s, though, that Alpha Industries would begin selling its jackets commercially.

Now, they’ve quickly become the jacket on literally everyone’s backs; Vetements collaborated with the brand for their spring 2017 collection and Acne Studios releases a slew of bomber jacket styles each season that bear a striking similarly to Alpha Industries’ MA-1 flight jacket.

“The bomber jacket is a significant fashion item, specifically in menswear as it is one of several garments that have been appropriated from military wear to make comment on non-conformist youth cultures,” explained Dr. Jo Turney, design historian and professor at Winchester School of Art. Some of those cultures range from the mods in the early 1960s to skinheads, punks and other rebellious groups—even rappers during the 1980s. Some of these groups customized the jackets with patches or pins that defined their own political beliefs or subculture references.

“It represents the juxtaposition of identity and loss of identity, of belonging to a specific group while at the same time sacrificing individuality,” said Turney, regarding the bomber jacket’s history of becoming an unconventional fashion uniform.

From a high-fashion perspective, it’s not too surprising that bomber jackets have been everywhere this year. Fashion is cyclical, after all, and Raf Simons, Helmut Lang and Jean Paul Gaultier are just a few of the designers who have reworked the traditional elements of the MA-1 jacket into contemporary fashion with their own spin. In 2004, minimalist designer Helmut Lang released his own version, dubbed the bondage bomber jacket, which had a removable wool lining.

Today, part of the jacket’s appeal for models and “it” girls could have to do with the fact that it’s the perfect mix of masculine and feminine. Sure, as a menswear staple it will probably live on forever, but women like Rihanna have reinvented the look in recent years. When paired over the everyday outfit of a bodysuit and skinny jeans, or leggings and a t-shirt—even a pair of over-the-knee boots with a dress— it adds the perfect amount of balance. It’s that effortless borrowed-from-the-boys look, distilled and made easy.

Turney added: “It has been an expression of differing kinds of masculinity—the peacock male in YSL‘s military inspired early 1970s menswear collections, which featured short, waisted, woolen, uniform inspired jackets that were worn by Glam Rockers.”

Ultimately, it’s a seriously versatile jacket that goes with just about everything we’re wearing today. It’s comfortable and can be dressed up or down. Its fascinating past doesn’t hurt either. Plus, if you’re in the market for a classic MA-1 flight jacket from Alpha Industries, the women’s and men’s version only cost $140—so you can get the look (from the OG purveyor, even) as seen on the runway at Vetements and even Gucci, for a fraction of the price. And what could be better than that? 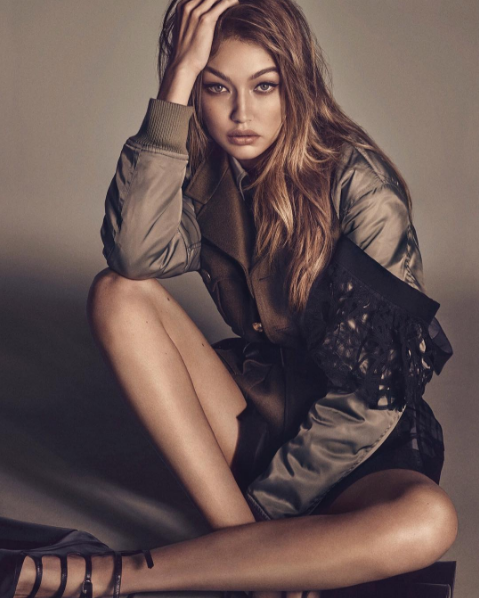