‘Imagined Dialogue For’ is our series by the hilarious and talented Chris Scott, of Reviews of Movies I Haven’t Seen fame. Next up? Chris takes a stab at guessing what happens in History’s series of bad things almost happening to truck drivers, Ice Road Truckers.

TRUCKER 1: Ok, be careful now, this ice is slippery and our truck is really large and heavy.

TRUCKER 1: Easy does it. The ice is super cold and slick today.

TRUCKER 2: Yeah, I’ll slow it down for a bit, until we get past this ice.

TRUCKER 2: Damn, there’s so much ice.

TRUCKER 1: My dad was an ice road trucker, like us. He told me once he was driving a truck in subzero temperatures and then all of a sudden he comes across this enormous sheet of ice, covering the road. Biggest he’d ever seen. You know what he did?

TRUCKER 2: You ever think all this ice is a metaphor, like for the human condition? How we’re all frozen in place emotionally?

TRUCKER 1: What’s that up ahead? More ice?

TRUCKER 2: How fast are you going right now?

TRUCKER 2: There is so much ice today.

TRUCKER 2: You mind if I turn on the radio?

TRUCKER 1: Are you cold? Hot? I can turn the heat down.

TRUCKER 2: So what’s really happening in that final shot in The Shining is — whoa!

TRUCKER 2: Did you see that? I just slid like twenty yards.

TRUCKER 1: That was crazy. Gotta drive carefully today. There’s an awful lot of ice on these roads.

TRUCKER 1: How cold do you think it is today? Like negative 10 degrees?

TRUCKER 1: So anyway, before the cashier even starts ringing me up, the woman behind me literally reaches all the way over my groceries and grabs the little divider thing, and slams it behind my groceries. Like, making a big show of it, sighing loudly and all this crap. And I’m like, lady seriously? I mean I didn’t say that, I just kinda rolled my eyes. But seriously, it was so embarrassing because there were like six people behind us. And I’m like, oh I’m sorry, did I not move fast enough for you? Like I was honestly just about to slide the divider back, but the guy hadn’t even started ringing me up yet! And I don’t know why there wasn’t more than one divider there. Usually there is. But whatever. So anyway, she starts putting her groceries on the conveyor belt, like literally slamming each thing down. And I’m just ignoring her, like, whatever lady. And the cashier and I look at each other and shake our heads like “People”, you know? Anyway, I don’t know if she saw us or what, but she goes — I kid you not — “You’re not the only person in the world, you know.” Seriously! Like I didn’t do a single thing to provoke her. I was 100 percent going to just ignore her. So I just turned around and I was like, listen. I don’t know if you’re just in a rush or a bad mood or what, but this is totally uncalled for. Like, we’re all waiting in line, we’re all being patient. If you honestly think I didn’t move the divider fast enough for you, then I don’t know what to say. I’m sorry, I guess. I really don’t think I did anything wrong, but whatever. And then I’m thinking, okay, I apologized, that’s the end of it, right? But of course she mutters some garbage like “I guess your time is just more valuable than everyone else’s.” And I was just like, are you being serious right now? I mean, let’s take a deep breath here. Regardless of where the divider was at that particular moment, nobody was stopping you from putting your groceries on the belt. Like, there’s no rule anywhere that says you can’t start unloading your cart until the divider’s there. What on earth is your problem. And she goes, 100 percent not kidding, “People like you are my problem.” She seriously says this to me. And then I was just like, you know what, there’s clearly something else going on with this woman. Like this isn’t even about the divider or the groceries or whatever. There’s like a whole other backstory there. I’m not getting into it. And then I just started to feel bad for her because, like, she was young, and it’s like if you’re gonna get this bent out of shape about a very minor inconvenience, like I don’t know how you’re gonna handle the big stuff. So I just said, I was like, have a nice day. And left it at that. This is not worth getting into a shouting match with a stranger over. You know?

TRUCKER 1: You mind if I turn on the radio? 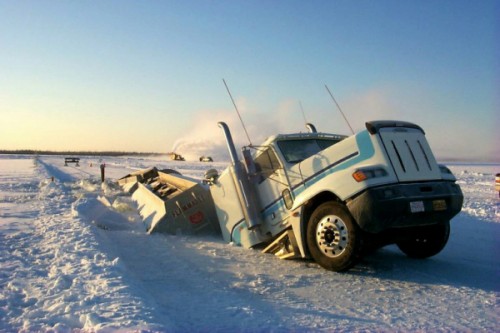