‘Imagined Dialogue For’ is our series by the hilarious and talented Chris Scott, of Reviews of Movies I Haven’t Seen fame. Next up? Chris takes a stab at guessing what happens in the eighth film of a car-racing franchise turned Michael Bay wet dream, The Fate of the Furious. 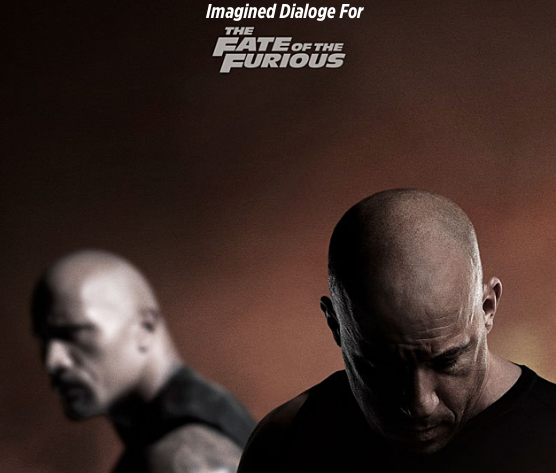 DOM: Man, this is what it’s all about. Just two guys on the open road, taking it all in. I love it.

LUKE: Just a solid, reliable vehicle top to bottom. Low gas mileage. Gets the job done, and then some.

DOM: Is there any better feeling than pulling into your local Toyota dealership on the opening day of the 2017 Toyotathon and feasting your eyes upon a slick, new Toyota Camry, starting at $23,070?

LUKE: If there is, I don’t want to know about it.

LUKE: Hey man, you know how much you mean to me, right? You’re not just my friend — you’re my brother.

LUKE: And if I ever criticize you, it comes from a place of love and respect. I hope you know that.

LUKE: Okay, how fast are you going right now?

DOM: Just under 45 miles per hour — the speed limit.

LUKE: Normally that would be the case. But what did we just drive past?

LUKE: That’s right. School’s in session and this is a school zone. Let’s drop it down to 25 miles per hour, pronto.

DOM: You got it. I appreciate you saying something.

DOM: Man, that was a close call!

LUKE: Yeah, those bad guys were on our tail for a while there. They almost got us! We got lucky.

DOM: Luck had nothing to do with it, Luke. You know what did, though?

LUKE: I know what you’re gonna say, and I love it already.

LUKE: Dom, I’m going to literally cry I love this car so much.

DOM: It’s the single greatest goddamn vehicle I have ever laid eyes on, and if anyone ever dared say otherwise in my presence I would crush their skull with my own two insanely muscular hands right in front of their children. You can take that to the bank.

LUKE: Speaking of the bank, how much do you think this Camry cost?

LUKE: Right? You will never be able to top that value, and I will never stop loving this car. Period.

LUKE: Hey Dom, thanks for picking me up in your 2017 Toyota Camry.

DOM: No problem. I own five of them. Blue, black, yellow, red, and green. One for each color of the Olympic rings.

LUKE: That’s awesome. That makes sense to me.

LUKE: Hey, I’ve been meaning to ask, how’s everything going at home?

LUKE: Haha, I gotta say Dom, usually when you say “That’s fine” like that, it kinda means the opposite.

LUKE: Wow, is everything okay? You guys seem like such a great couple.

DOM: Oh, no, we are. It’s mostly fine. The communication just isn’t totally there. Like it almost feels like our marriage is on autopilot or something.

LUKE: Talk to me.

DOM: Sometimes when we talk it’s like I can’t get a word in edgewise. Which isn’t the end of the world, because she always has interesting stuff to talk about. It’s more just like she’s talking at me, you know? And she doesn’t really ask about my day, simple stuff like that. She doesn’t seem that interested in really engaging.

LUKE: Huh, that’s really interesting. Have you tried talking to her about this?

DOM: Well, that’s kind of the issue isn’t it! Hahahaha.

LUKE: Hahahaha, fair point. You know what I mean.

LUKE: You definitely should. Communication is so important. And check this out: She might even be relieved you brought it up.

LUKE: Maybe she’s actually an introvert, and she’s in fact overcorrecting by being hyper-talkative. I used to be like that, to tell you the truth.

DOM: Really? You’re so outgoing and sociable, though.

LUKE: It used to be hard for me! My default mode was to just be alone in my thoughts. It used to be that an ideal night for me was relaxing at home, reading the paper. Not out at some party, or what have you. I had to work on being more extroverted. And I’m glad I did. Anyway, it’s just a thought.

DOM: No, that’s really interesting. I feel like sometimes it’s hard to bring things up with her because my immediate assumption is that I’m burdening her. But by not talking about it, really all I’m doing is burdening both of us. And that’s not fair to her.

LUKE: How you feel is how you feel, you know? All you can do at the end of the day is be open and candid with her. I have no doubt you guys can work through this. The foundation of your marriage is super strong.

DOM: I really love and treasure you, Luke. Your values, perspective, and wisdom mean the world to me, and I hope you know what a positive example you set for everyone in your life, not just me. Truly, you’re an exceptional person.

LUKE: I love you too, Dom. Very much. Please keep me posted on how the conversation goes, and let me know if you need to talk through anything else. 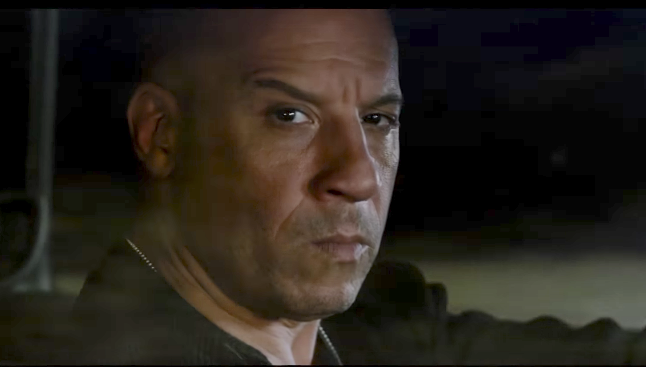 Filed Under: Entertainment, Movies, Fast and the Furious, Vin Diesel, Dwayne Johnson, Fate of the Furious