Dr. Jill Stein, along with her campaign staff and fellow Green Partiers, came all the way to Trump Tower this morning to blast his “anti-verification campaign” and tell him to stop spreading false information her recount efforts in three swing states.

Early Monday morning, the Stein campaign announced that a federal judge in Michigan granted the campaign’s emergency request to immediately start the statewide recount. On Nov. 28, the campaign said Pennsylvanian voters filed recount requests in more than 260 precincts across the state and two days ago that it would file for emergency relief in federal court to demand a statewide recount. The Stein campaign also filed a recount petition in Wisconsin on Nov. 25, requesting that a statewide hand recount that started on Thursday.

Stein sought again to distinguish her efforts to audit the vote from Trump’s claims ineligible individuals cast ballots—a point she made when she spoke to the Observer at the National Women’s Political Caucus of NYC’s 2016 New York State Conference of Civically Engaged Women on Friday.

“We are here to assure Donald Trump that there is nothing to be afraid of,” Stein said. “If you believe in democracy, if you believe in the credibility of your victory, put down your arms, end your bureaucratic obstruction, end your intimidation and join we the people of America who are calling for a democracy that serves all of us and elections that we can trust.”

She’s unsure of whether the recounts will change the election results, calling it “unfair to raise expectations that the outcome is going to change” and saying that her effort seeks to produce “an election system that we can trust.”

“I wanna underscore that: that we were not challenging one candidate or assisting another candidate,” she said. “This is about ensuring that all votes get counted and that voters can trust this system going forward.”

She noted “some 75,000 blank votes,” or what she said were “so-called under votes” in Michigan, primarily in counties in which Detroit exists—an increase of about 70 percent over all “under-votes” in previous elections—indicating that communities of color has been disenfranchised.

The lead counsel to the recount efforts, Jonathan Abady, said they have “compelling, circumstantial evidence” that the voting machines used are unreliable and out of date,   and that the Federal Bureau of Investigation and the Department of Homeland Security have confirmed that “we have had an unprecedented level of cyber attack and cyber intrusion.”

He gave examples such as cyber attacks on the voting systems in Arizona and Illinois and the intrusion of the Democratic National Committee headquarters as well as Clinton campaign chairman John Podesta’s emails. This seemed to contradict Stein, who told the Observer at her Bronx rally in October that there is no evidence that the Russian government was behind the email leaks.

“Anyone who’s opposed to this and the person who owns that building behind us is involved in an anti-verification campaign, in a ‘let’s sweep it under the rug’ campaign, in a ‘let’s hide it,’” Abady said. “And we are not gonna surrender to that because the essence of a democracy is grounded in the vote, in the awareness that every vote counts.”

Stein also dismissed Trump’s claims that her recount is a scam, noting that it’s likely there will not be money left over “because the price keeps being raised on us” and that it is an “outrageous concept” that they have to “dig deep and come up with millions of dollars to affirm our democracy.”

“Once again, we urge Donald Trump to look at the facts, not to make up the facts and in fact, if he takes a look at our website, he will see that every dollar raised is actually going into a segregated and dedicated recount account so that this money cannot be spent for any purpose other than advancing the recount,” she said.

Stein was joined by a chorus of Green Party members who vouched for her recounts. David Cobb, the 2004 Green Party presidential candidate, noted the Ohio recounts in 2004 and said the abolition of black box voting—when it is unclear how voting machines function—in Maryland, California and New Mexico calls for “robust audits and state-funded recounts.”

“Make no mistake about it: the Stein recount effort is about ensuring that confidence in the integrity of the election system as a first step toward genuine voting justice in this country,” he said. “There is a growing movement for real democracy. The Green Party is proud to be in a leading role of that movement.”

Before Stein arrived, one protester said she should “Vote in jail like a common criminal!” and a Clinton supporter shouted, “Stop bashing Hillary supporters!” Another protester as supportive, screaming, “Thank you for running!” as she was speaking.

Right alongside Stein’s rally, Councilman Ydanis Rodriguez, chairman of the Transportation Committee, called on Trump to take his unofficial transition headquarters out of New York City to ease traffic congestion in Midtown Manhattan. He’s sending a letter to Trump today.

The City Council launched a petition demanding that the Trump administration repay the NYPD for protecting his family and his buildings and Mayor Bill de Blasio is talking to the federal government about federal reimbursement for the city.

“There’s nice weather in Florida right now where he should be,” Rodriguez said. “I hope also that after he takes office in January, he changes his mind as President Obama did when it comes to relocating his family to continue their school in Washington, D.C. so that the city won’t have to be reinvesting more than $1 million a day in this area.” 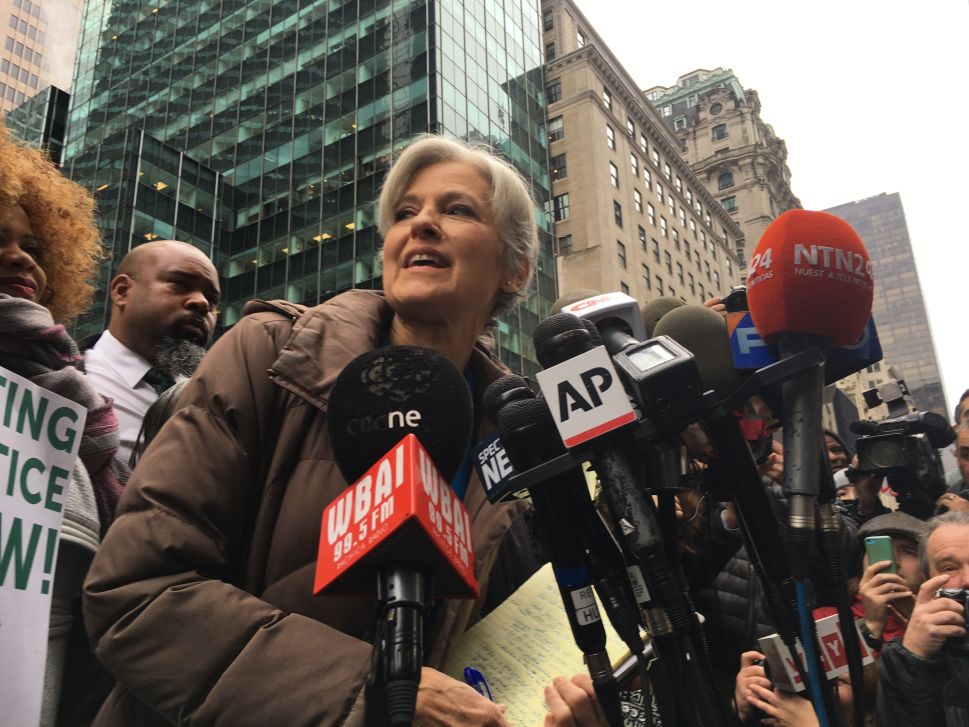