As Kanye West’s long-time consultant, creative director and head of Milan-based fashion label, Off-White, there may be no one closer to the pulse of pop-culture in 2016 than Virgil Abloh.

Despite his larger-than-life artistic influence, sitting on the couch next to Abloh, he comes across equal parts humble and grandiose, yet calm and unassuming. He maintains this posture even as a trail of journalists beeline from the hotel lobby up to his room, waiting patiently for their time with him before he takes the stage.

Off-White epitomizes much of what makes Abloh both such a distinct and successful presence in both fashion and music. Seamlessly blending couture-cool with street-sense, even with price-points that nudge you toward consulting a fiduciary before buying a short-sleeve graphic tee, the brand somehow still feels accessible.

And that’s just within the world of fashion.

If a young music producer or hip-hop artist is about to breakout internationally, there’s a good chance they’ve been on Abloh’s radar since last year. And probably Kanye’s, too.

In the moments of downtime between globetrotting from Milan, to Toronto, to Los Angeles, to Pennsylvania, the Observer sat down with Abloh to discuss the emerging new frontier in music, global culture and his high- marks for 2016.

Can you tell me about your last 24 hours?

I was in L.A. at a friend’s birthday party and then flew to Toronto to give a talk on current culture and creativity with a photographer that I use for my fashion collection [Off-White]. Then, I flew at like, 6 in the morning…here.

Do you get tired or are you running on adrenaline?

I think typically I used to say, “I’m not tired.” Now, I would say I definitely get tired. But, I don’t sleep. So, I’ll just be tired. Then, I’ll be un-tired. I do sleep on planes.

And if you’re inspired about what you’re doing, you can run off that…

Exactly. My thing is that I was just always trying to avoid a traditional day job, so to me it’s all vacation. When you’re productive and doing what you love, for me, that’s what drives me.

What about your DJ set tonight? Any unreleased tracks or anything you’ve been waiting to spin?

I’m sort of in a weird place. DJing is a very sort of personal vibe. If you’re into it, you’re locked into it. I usually don’t play exclusives; I don’t have them! I need to get into that. I admire that about DJs. I don’t play anything exclusive. I play old songs. Yeah, for me, I try to make do with the songs I have.

Do you have access to a lot of the stuff that’s coming out through G.O.O.D. Music?

I’m not in the studio like that. For me, I just storytell with the songs I have, reminding people of their favorite songs. I’m on a record label, called Bromance, which is Parisian techno and also rap.

Do you produce as well?

No, but hopefully in the near future I’ll be working on some projects. For now, I just record and DJ.

Who are your labelmates on Bromance?

Louis Brodinski. He just released The Sour Patch Kid. You can look it up on his SoundCloud. He just dropped an ill mixtape that’s all made in Atlanta. He’s Parisian, he goes there by himself. He’s in the studio with kids that Young Thug has found and goes and makes a whole project.

He was born and bred playing techno in raves deep in the outskirts of Paris, so, that’s just the sort of subsect of culture that I come from.

You mention Young Thug. What artists do you think are setting trends in industry right now or redefining industry?

Travis Scott, Lil Uzi, Yachty, you know, [A$AP] Rocky, Nast, Twelvyy. I feel like they are the first true generation in rap to express the art form, from the furthest point away from the cornerstones that determine success, I.E., label or management.

These kids are making songs on SoundCloud, they’re headlining their local radio showcases, in a way that, with respect to their culture, is not trying to adapt to the record industry.

Creating it themselves and empowering themselves.

Chance the Rapper as well. I’m from Chicago and I think there’s a renaissance in music, especially hip-hop. All these new kids that are making their own lane and making music for their own demographic. They’re not trying to achieve the success or acclaim of radio; they have their idols but they’re serving their own dreams in rap and it reflects in the music, as well as in the U.K., it’s not just an American thing.

We’re seeing a lot of crossover that comes from the culture but it also comes from kids like us, who dedicate ourselves to DJing and playing these songs out loud.

“[‘The Life of Pablo’], the way it was conceived, every Instagram. To me, [Kanye] adds a layer to the culture that comes through hard work, precision and dedication. The success of the tour, the fact that it sold out rooms that have never been sold out before…Every bit of it can only be described as revolutionary and I think that it’s important to remember that his career, that trajectory, is steeply going up.”

I don’t think hip-hop is in a place to have sub-genres. You can categorize things however you want but it doesn’t even matter, it’s hip-hop.

What about Yachty’s auto-tune as something parallel to 808s & Heartbreak from Kanye? Is that a crutch or is that a new lane?

I stay away from categorizing things. It’s like The Beatles versus Phil Collins. Who cares? It’s the best music that we had for the generation. It doesn’t matter what tools, it’s the best. Just play it, listen to it, kids love it, I love it. It resonates.

The fact is that it’s a great time in music and that’s something to remind ourselves. You can market your music with Instagram, you don’t have to pay anyone, you can create your own wave. It’s merging with fashion, it’s merging with culture.

What about 2016’s top musicians or top albums? Who’s setting the high- mark?

2016? Man, Kanye West. Pablo Tour. That album, the way it was conceived, every Instagram. To me, he adds a layer to the culture that comes through hard work, precision and dedication. The success of the tour, the fact that it sold out rooms that have never been sold out before…

Every bit of it can only be described as revolutionary and I think that it’s important to remember that his career, that trajectory, is steeply going up. That’s an easy question.

How does Kanye West stay motivated if he’s the one setting the bar?

His DNA. It’s just in his DNA.

In terms of your fashion and Off-White, what do we have to look forward to in 2017?

I just put my head down and work. You know, I’m always on this high level of creation, I don’t even know, I can’t even tell you what I’m working on.

Not that I can’t tell you, but I don’t even know…

This interview has been edited and condensed for space. 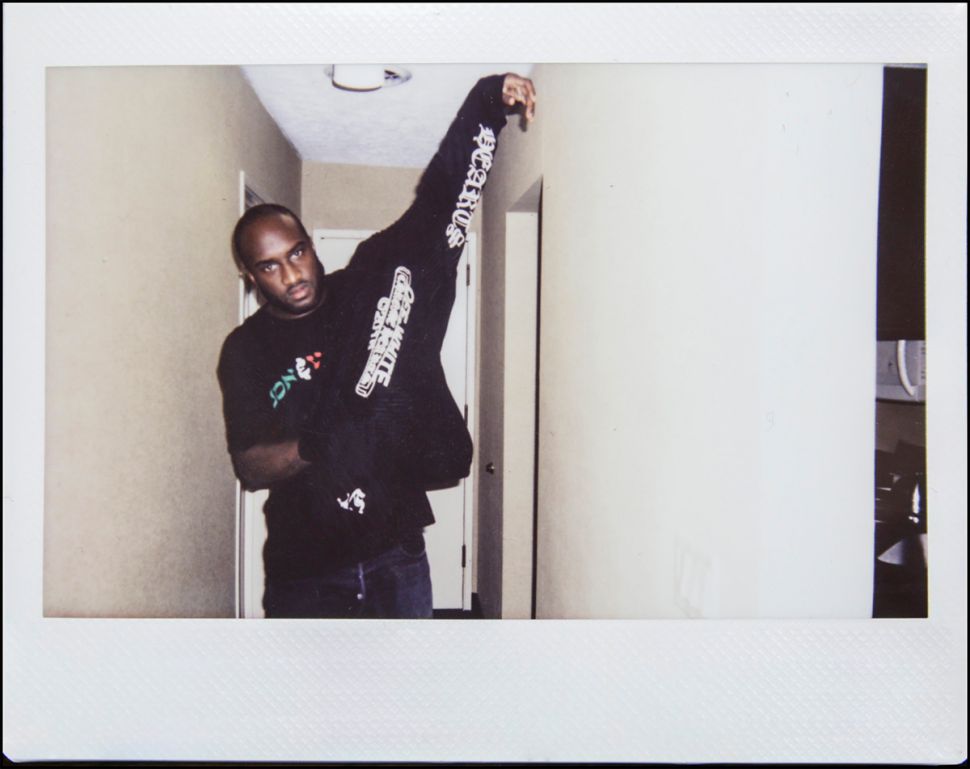