But Todd, host of NBC’s Meet the Press, offered the strongest commentary on the issue of the day when he discussed on Sunday how Russian hackers attacked the Democratic Party in the presidential election and how Trump reacted to this news—which was leaked, possibly, by the CIA.

“As stunning as the CIA’s conclusion,” Todd said, “equally remarkable was Donald Trump’s decision to side with a foreign government over our own chief intelligence agency.”

After Todd told Republican National Committee Chair Reince Priebus that Trump “humiliated the CIA,” Priebus told him “I don’t know why you’re so hot about this.”

PRIEBUS: “You should be happy that the RNC wasn’t hacked.”

Priebus said this despite a New York Times story—based on unnamed intelligence sources—that said the Russians hacked the Republicans but withheld the exposure of those emails because they favored Trump in the election.

Even before the Nov. 8 vote, there were reports that Russians had fed their stolen Democratic messages to WikiLeaks, which eagerly exposed them. Friday’s original story about intelligence confirmation of Russian hacking bias appeared in The Washington Post.

Trump believed neither newspaper. He blamed the reports on the Democrats for not accepting his defeat of Hillary Clinton in the Electoral College tabulation.

“I think it’s ridiculous,” Trump told Wallace. “I think it’s just another excuse. I don’t believe it . . . I think the Democrats are putting it out.”

After the stories broke Friday night, Trump issued a statement ridiculing the American intelligence agencies as “the same people” who provided President George W. Bush with erroneous intelligence in 2002 about weapons of mass destruction in Saddam Hussein’s Iraq.

Bush invaded Iraq in 2003, a decision whose negative consequences are still being felt. Todd pressed Priebus on Trump’s truculence.

TODD: “You dispute 17 different intelligence agencies that have assessed that Russian agents were behind this. You dispute this?”

PRIEBUS: “Chuck, this is insane.”

One of Todd’s good guests was Congressman Adam Schiff of California, a member of the House Intelligence Committee who seemed appalled at what he’d heard.

“We have a President-elect . . . who will disregard even the best assessments of the intelligence community when it doesn’t suit his own version of events,” Schiff said. “That is extraordinarily damaging.”

Schiff said Trump is “willing to give the Russians cover” and “that is so extraordinarily beneficial to Russian propaganda.”

For historical perspective, Todd presented author Doris Kearns Goodwin, who expressed dismay that Trump “cast aspersions on the CIA” even before becoming president.

Todd also discussed with Priebus and others the possibility that Trump would name Exxon-Mobil chief executive officer Rex Tillerson as secretary of state. Tillerson, Todd said, attended an event in Russia recently despite the wishes of the Obama administration that he not go.

“He essentially put Exxon’s interests over and above the interests of the United States government,” Todd told Priebus, who is to become Trump’s chief of staff in the new administration.

TODD: “Do you understand why that would unnerve some people about the idea of him as America’s chief diplomat?”

PRIEBUS: “Well, it might unnerve people who think the best route for our country to go is to ignore people and have an enemies list.”

Tillerson is no enemy of Russia. Putin gave him an “Order of Friendship” medal.

FOX NEWS SUNDAY This is Trump’s sanctuary network, so get ready for four years of “exclusive” interviews in exchange for favorable coverage.

Despite losing the popular vote by more than two million ballots, Trump again bragged to Wallace about his “massive landslide,” an assertion unchallenged by the host.

Wallace did allude to Trump’s contempt for the intelligence agencies, public now that Trump has brushed off their top-secret daily briefings.

“I’m like a smart person,” Trump said. “I don’t have to be told the same thing in the same words every single day for the next eight years.”

‘We have somebody who’s going to be the captain of our team, but is spending more time going to pep rallies than he is going to practice.’

Wallace asked Trump about the possibility that his daughter, Ivanka Trump, and her husband, [Observer Publisher] Jared Kushner, might work for him in Washington despite laws forbidding nepotism.

“We’ll have to see how the laws read,” Trump said. “I would love to be able to have them involved.”

“Nobody really knows,” Trump said. “It’s not so hard and fast.”

Regarding the conflicts of interest when his governmental decisions overlap with his business interests of his companies, Trump said such ethical questions are not a big deal to voters.

“When I ran, everybody knew that I was a very big owner of real estate all over the world,” Trump said.

THIS WEEK Priebus, making the rounds, visited with ABC host George Stephanopoulos and told him “the Russians didn’t tell Hillary Clinton to ignore Wisconsin and Michigan.”

Republican Senator Rand Paul of Kentucky warned Trump that he’d better not nominate the warlike diplomat John Bolton for any serious job in the State Department.

Two less-famous guests were ethics lawyers Norman Eisen, from the Obama administration, and Richard Painter from the Bush administration. They were asked about Trump’s plan to let his family run his businesses while he runs the nation.

“He must divest from all business interests or he will be in violation of the Constitution from day one,” Eisen said. “He’s going to be tainted by scandal.”

“We have somebody who’s going to be the captain of our team,” Simmons said, “but is spending more time going to pep rallies than he is going to practice.”

He also noted that oh-so-many Republicans were quick to condemn the late Fidel Castro as a “thug and a bully” but are shy about saying the same thing about the living Russian strongman who is so admired by America’s incoming Great Leader.

E.J. Dionne of The Washington Post said of Trump: “He has more confidence in Vladimir Putin’s strength than in Barack Obama’s strength. His closeness to Putin is a very scary thing for the country.”

FACE THE NATION On set with CBS host John Dickerson was Republican Sen. John McCain, part of a bipartisan group calling for Congressional hearings into the Russian hackings and involvement in the American election.

“It’s clear the Russians interfered,” McCain said. “The facts are stubborn things. They did hack into the campaign . . . it requires an investigation . . . Vladimir Putin is a thug and a murderer and a killer and a KGB agent.”

Michael Duffy of Time Magazine said Trump has “drawn a fairly dark cloud over his relationship with the intelligence community . . . Sweeping this stuff under the rug as a first reaction might be at his own peril.”

Michael Gerson of The Washington Post added: “People I talked to in the intelligence community about this were most offended by the ad hominem nature of this attack.”

Lisa Lerer of the Associated Press discussed Trump’s choices for cabinet and other high posts. Many of them are multimillionaires and business tycoons. Trump courted the vote of the common worker.

“You do wonder if there is a certain point at which his supporters say ‘You know, this isn’t what we bargained for,’” she said.

STATE OF THE UNION One of the topics Biden discussed with Tapper was the planned Republican assault on health care insurance coverage.

Trump and other Republicans campaigned on a promise to “repeal and replace Obamacare,” a health insurance plan that added coverage for about 20 million people who lacked it.

“Go ahead and repeal it,” Biden said with a smile. “Repeal it now. See what happens.”

On the panel, discussing the possible nomination of Tillerson as secretary of state, former Democratic Governor of Michigan Jennifer Granholm called the Exxon boss “a clear ally of Putin. This is a gift to Vladimir Putin . . . they want a weak America and that’s what they think they’ve got in Donald Trump.”

MEDIA BUZZ One of Howard Kurtz’s guests on Fox was Ruth Marcus of The Washington Post, who discussed how Trump treats intelligence briefings.

“I’m very disturbed about the President-elect’s kind of instinctive reaction,” she said. “’I don’t trust them. I’m not hearing anything interesting from them so I don’t have to go to daily briefings.’”

Of Trump’s rude and impulsive comments, Kurtz said “I think the press is simply not accustomed to Trump’s street-fighting style.”

RELIABLE SOURCES Liz Wahl, former anchor on the Russian network TV Russia Today, told CNN host Brian Stelter: “We have a President-elect who has basically matched some of these key talking points in Russian propaganda to undermine our system.”

Julia Ioffe of Politico said “It does feel like we’re on the verge of something potentially awful and Trump seems to be taking us there daily.” And Carl Bernstein added “Richard Nixon was nothing in terms of lying compared to what we have seen from Donald Trump.”

CHRIS MATTHEWS HAS A BLIND SPOT Ever since Kellyanne Conway became Trump’s campaign manager, Chris Matthews of MSNBC’s Hardball has made it obvious he admires and likes her.

But sometimes his fondness inhibits his journalistic instinct. One example came last Thursday after Trump’s Twitter attack against Chuck Jones, an Indianapolis union leader who corrected Trump’s overstatement of how many jobs were saved at a Carrier plant.

The total was about 730, Jones said—not the “more than 1,100” that Trump claimed. Trump then tweeted that it was Jones and unions like his that cause companies to leave the U.S.

Matthews asked Conway: “Why does Donald Trump, who’s a big guy, attack this little labor leader out in Indiana?”

CONWAY: “He’s just setting the record straight. People feel like with Donald Trump, they have license to say whatever the heck they want about this guy with no consequences, with no blowback. The guy has a right to defend himself. And he rarely draws first blood. It’s when he is attacked he likes to set the record straight.”

Aside from the lame “we’re the real victims here” trope, Conway was lying. It was the union leader who told the truth and “set the record straight.” Trump was the liar. Matthews didn’t correct her.

Conway used a tone similar to the one she used on Jennifer Palmieri when the Clinton campaign official noted in a panel at Harvard that Trump’s campaign allowed a platform for white supremacists.

Instead of acknowledging the truth of that statement, Conway responded with fake outrage, asking instead how dare this woman say such a thing to her, Kellyanne Conway, official mouthpiece for The Great Leader. 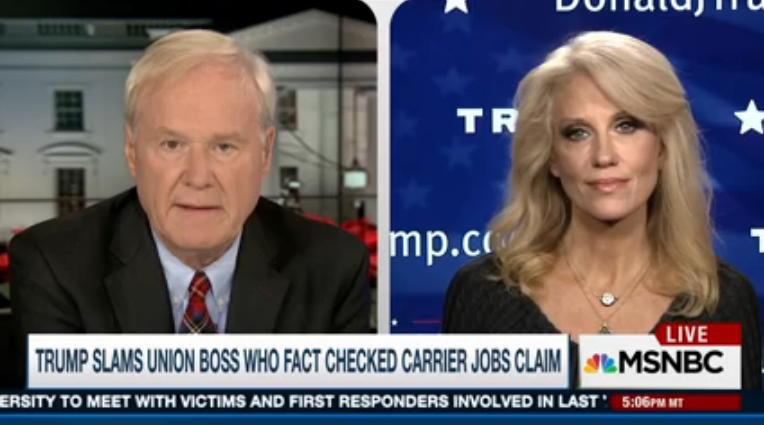