Since last month’s presidential election, there’s been plenty of social media vitriol aimed at people on both sides of the political spectrum—in one extreme example, a Silicon Valley CEO resigned after threatening to kill President-elect Donald Trump.

The latest election-related Facebook flap comes courtesy of George Buch, a graduate assistant and math instructor at the University of Nevada, Las Vegas. On Wednesday night, during a conversation about “illegal aliens,” Buch wrote that he would turn undocumented students in to Immigration and Customs Enforcement (ICE) officials. 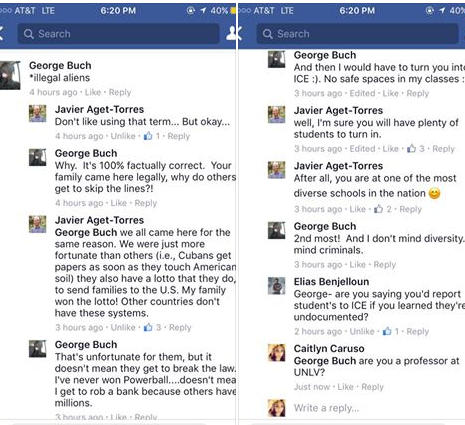 “Your family came here illegally, why do others get to skip the lines,” he wrote. “I’ve never won Powerball…doesn’t mean I get to rob a bank because others have millions.”

Buch also bragged that there are “no safe spaces in (his) classes.”

“I don’t mind diversity, I mind criminals,” he concluded.

The Consolidated Students of the University of Nevada (CSUN) condemned Buch’s comments.

“CSUN will not tolerate behaviors that undermine our university community to damage the overall student experience,” the group said in a statement. “We are committed to speaking out against discrimination and hate speech in order to advance the cause of equality for all students.”

In a statement to the UNLV student newspaper Thursday night, Buch apologized for his comments, calling them “a joke, although clearly a poor one.”

“I have never, nor will I ever, create a classroom of hate or intolerance,” he said. “These students and their success mean everything to me, and I’m sorry that I put them in jeopardy.”

The UNLV administration has not yet taken any disciplinary action against Buch, but a spokesperson said university president Len Jessup made his position “quite clear” last week, when he joined over 380 other college and university presidents across the nation in signing a letter in support of the Deferred Action for Childhood Arrivals (DACA) program and undocumented immigrant students.

DACA, which was established in 2012 through an executive order by President Barack Obama, allows undocumented immigrants to the United States who entered the country before their 16th birthday to receive a work permit and maintain exemption from potential deportation. Trump has hinted that he would revoke the policy when he takes office.