After “amazing,” “awesome” and “iconic”—on the short list of the Most Overworked and Banishable Words in the English Language—is “immersive,” but the Irish Rep’s rich, jolly immersion into The Dead, 1904 is enough to give it a good name again.

Should you be dreaming of a white Christmas, then definitely the place to be is the American Irish Historical Society, a Victorian townhouse at Fifth Avenue and 8Oth Street, where snow falls nightly (twice on Wednesdays and Saturdays) till January 7, 2017.

Please note that they’ve added a date to the title to ward off any other Dead devotees—be they Grateful or Walking—and remind everyone that James Joyce got there first with his tale of a family gathering in wintry Dublin of 112 years ago.

Published in 1914, cinematized in 1987 and musicalized in 2000, The Dead is the last and most famous of the 15 short stories in Joyce’s collection, The Dubliners. Many say it’s among “the greatest pieces of English language literature” because of its haunting juxtaposition—how a festive family affair can open up old sorrows.

All of the above flashed before Jean Hanff Korelitz a couple of years ago when she attended a reading of A Christmas Carol at the Historical Society. “Whenever I have a big idea like that, it’s for a novel, and then I’m spending the next four years writing a novel,” says Korelitz, who has written six novels but never a play. “This is the first time I’ve had that kind of idea that didn’t end up as a novel. When you write a novel, you’re on your own. You go into a room. You either do the work or you don’t do the work, and it’s either good enough to be published or not. For something like this, you can’t do it alone. You have to involve other people who have to think this is a good idea, too.”

Consequently, she recruited within her immediate circle. To help her adapt this literary masterwork into an immersive entertainment, she turned to her husband, Paul Muldoon, who may not be a playwright but is a Pulitzer Prize-winning poet (for 2003’s Moy Sand And Gravel) as well as the poetry editor of The New Yorker—and, more importantly, an Irishman with a particular appreciation of James Joyce.

Then, to make her vision happen financially, her sister, Nina Matza, turned producer, and they formed Dot Dot Productions to bankroll the project in part.

This required very creative number-crunching, since the room upstairs where the crucial last scene is tenderly played only accommodates 42 bodies per performance, and there’s a banquet right out of Joyce beforehand: beef tenderloin with fig sauce, honey-glazed ham, green beans, potatoes, bread pudding and free-flowing wine.

“I once wrote an article for Reader’s Digest about Liz Neumark, who’s head of Great Performances catering service,” Korelitz says. “I’d gotten to know her and knew she had a theater background. She was the only call I made. I knew she’d love this idea.”

Then she made a call to New York’s premier Irish company, the Irish Rep, to design, stage and act the piece. Its producing director, Ciaran O’Reilly, helmed the show and corralled a cast of 12 reliable stalwarts, starting with Boyd Gaines and Kate Burton.

Guests are met on the first-floor landing by a peppy maid in gaslight-vintage attire, who scurries up and down the stairs delivering them two by two to the second-floor ballroom. Your choice of sherry, port or whiskey is waiting at the top of the stairs.

The ballroom is chandelier lit and alive with period-dressed characters chatting and mingling. O.K., it’s grander than the “dark, gaunt house on Usher’s Island” Joyce granted the elderly Morkan sisters and their music-teaching niece, but so what?

From the sidelines, we watch the major characters arrive. There’s no missing the inebriated entrance of Freddy Malins (James Russell) or the quiet cringing of his mortified mum (Terry Donnelly). “He’s nearly all right,” the spinster sisters’ favorite nephew, Gabriel Conroy (Gaines), reassures her. He then has a testy waltz with an aggressively political Molly Ivors (Aedin Moloney), carves the turkey-passing-for-goose and delivers a dinner speech in praise of his aunts and the old Irish ways.

“Our instinct in adapting this story was to preserve every syllable and every gesture—everything we could—from the book,” insists Korelitz. “The only thing we actually did was we added more music. When it comes to the dinner scene, we needed to figure out how to communicate to the audience that they could actually eat their food. There were times when they had to listen and times when they could talk. Adding the music to the dinner scene was a way to guide the flow of the meal.

“This is a joyous dinner party. There’s even dialogue about how this family eats well and has the best of everything, but some 50 years in the rear-view mirror, for all of them, there was the most appalling starvation. Paul would say The Dead is possibly the first Irish text that is talking about the famine, although it is not always being talked about in an upfront way. It’s recent enough that people are not going out of their way to talk about it it’s so painful, but it’s far enough away that they feel like they’re allowed to not think about it anymore. It haunts then, yet they’re trying to ignore it at the same time, but, of course, you can’t escape that kind of catastrophe.”

As everybody dines in the banquet room adjacent to the ballroom, there are violin interludes and vocal solos. One by the evening’s star-attraction tenor (Karl Scully) sparks the memory of a forgotten first-love for Gabriel’s wife, Gretta (Burton).

In the novella and the John Huston movie, the Conroys—during the long carriage ride across Dublin and in their hotel room—discuss this memory that threatens to upend their marriage. For the play, they are persuaded to sleep over in their aunts’ third-floor bedroom, so they retire there (followed, of course, by 42 on-lookers).

In the scene that follows—the piece de resistance of the evening—these longtime marrieds come to the devastating conclusion that they never really knew each other.

It’s all played with great poignancy and feeling—mostly in the dark, save for a street light that catches snowflakes fluttering by the windowpane (courtesy of a well-placed, if temperamental, snow-machine manned by the stage manager).

For Joyce, this was the epiphany that followed the Feast of the Epiphany we’ve just attended. “All my life,” says director O’Reilly, “I’ve loved that final scene of the short story. That description of where ‘snow is general all over Ireland’—all that beautiful language always touches me to the core. Our adapters have reset Joyce’s descriptive passages in first person as an inner monolog for Gabriel, and Boyd just goes with it.”

Co-adapter Muldoon takes a bow for that. “We did give him the last scene. The truth is, that scene certainly comes from the page through the prism of Gabriel Conroy.”

And the name of that character, Muldoon points out, comes from a Bret Harte novel titled Gabriel Conroy. “He stole, as it were, the name from that novel so he could reflect in the final passage of his story the opening of Hart’s novel, which is set in the Sierra Nevada Mountains in the 1840s when the famine happened back in Ireland.”

Gaines agrees his character has a pretty bumpy night. “It’s quite a journey he takes,” he says. “It reminds me a bit of The Five Stages of Grief—denial, anger, bargaining, depression and acceptance—because he experiences a kind of death as well. It’s not entirely applicable, but he definitely goes through little trials—mostly with women.”

He and Burton have been married before—as Tyrone Guthrie and Katharine Cornell in A.R. Gurney’s 2010 The Grand Manner. They also did Company together (he as Bobby, she as Sarah) and a miniseries called Evergreen, so they make a convincing, compatible pair now. “The minute they asked me to do this, I said, ‘Yes,’ ” she recalls.

“Actually I did the benefit for it last spring with John Slattery playing Gabriel. I just said, ‘This is something that sounds really interesting and engaging and unlike anything I’ve ever done.’ I’ve always been so moved by the story, having read it when I was a teenager and again as a grown woman, then seeing the film and the musical version. I just really felt like I knew who Gretta was. I knew who she was for me, and every actor who plays a great part is going to find who the character is for them.”

She has also found a way to cope with the evening’s intense voyeurism. “It feels like doing a movie. I told Boyd, ‘The 42 people are the film crew, and we’re shooting.’ ”

By design, The Dead, 1904 is a decidedly two-toned event—a lightweight buildup to a heavy-duty finish. “It’s a challenge,” Burton admits, “because there’s no big huge scene at the beginning, just little ones. We call them ‘dabs of paint.’ Every little scene is like a dab of paint on a very large canvass. The same could be said of Chekhov.”

A satisfying theatrical evening that is, by turns, amusing and emotionally moving, doesn’t come cheap—especially when there’s a full festive meal out of times past in between and there are only 42 people who can partake in each performance. Two lottery tickets every day go for $19.04, and the other 40 sell for $300 per customer.

“If you go to a Broadway show and then out to dinner, that’s what it costs you—this just happens to be in one place,” reasons co-producer Matza. “The reality is that we came to that number based on what it costs to produce the show. It was not, in any way, a random number. When we realized it was a pretty significant number, we sort of backtracked a little bit to ‘Can we justify that?’ Personally, we knew we could justify it because we weren’t charging that much in order to turn a profit. We were charging that much to make it happen. Our passion, really, was to make it happen. It’s nice to make money, but since this was our first production, our main goal was ‘We just want to make this happen—and we want to make it happen spectacularly.’” 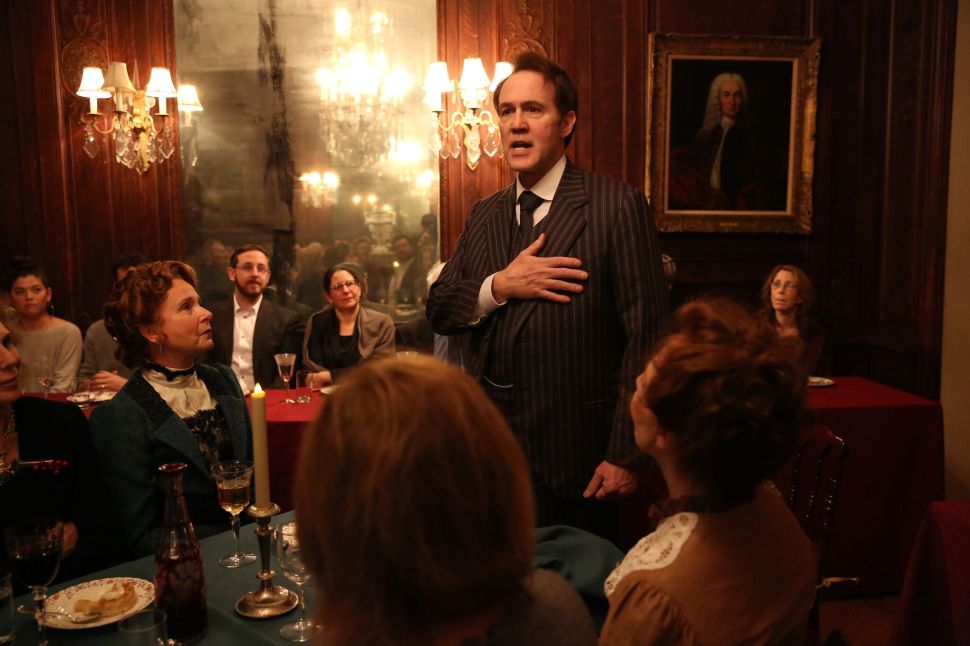