Even the most jaded opera fans (and that group would include me) always find something novel and startling to enjoy at LoftOpera’s presentations of classic operas. For example, in last summer’s production of Rossini’s sex farce Le Comte Ory, director John de los Santos enriched a drinking scene for a gaggle of randy noblemen by having two of the sozzled hunks strip down to their skivvies for a game of Twister.

The gimmick in last night’s opening of Verdi’s Macbeth, though, was that there were no gimmicks. Strongly musical and intensely dramatic, the performance felt as real and immediate as a nightmare. Even in the user-unfriendly ambiance of a warehouse space somewhere in the maze of the Brooklyn Navy Yard, the three-hour grand opera seemed to fly by. And if the audience was visibly trembling, that was only in small part because of the wintry winds whipping off the East River around the cavernous MAST Chocolate Factory.

Musical values are always strong at LoftOpera, but this was perhaps their best-cast production so far, without a weak link across the principal roles. As Macbeth, Craig Irvin flaunted a big, steely baritone as striking as his craggy profile. Opposite him, soprano Elizabeth Baldwin required the better part of the first act to warm up fully, but it was worth the wait to hear so arresting an instrument, pealing with squillo in Lady Macbeth’s many high B’s and C’s.

The thunderous bass of Kevin Thompson brought immediate and commanding authority to the role of Banco, which is just as it should be since the plot of the opera kills off the character midway through the second act. Similarly, Peter Scott Drackley’s muscular tenor focused attention on the role of the rebel Macduff. His defiant side eye during the banquet scene was every bit as effective as his blazing top notes.

A youthful chorus of perhaps a dozen and half swarmed fearlessly over, around and through Andrea Merkx’s rocky set pieces and the performing space’s steel scaffolding. The women were particularly admirable for their versatility, shifting on a dime from the witches’ snarling prophecies to the heartbreaking pathos of Verdi’s chorus of Scottish exiles.

The few times director Laine Rettmer embroidered upon the libretto felt organic and true, particularly effective in the Banquet Scene finale, which devolved into a mass mad scene. The crisp orchestral playing of the orchestra under the baton of Sean Kelly was highlighted by an atmospheric account of the first act prelude, with portentous horn fanfares seeming to “hang” forever in the vast space’s cavernous acoustic.

Ironically the playing of the Met Orchestra—by general affirmation one of the finest such ensembles in the world—seemed the weak link in Monday night’s revival of Strauss’s Salome. Debuting conductor Johannes Debus offered an X-ray of the virtuoso score, with inner voices glistening but little gravitas in the sound.

Patricia Racette’s bright, glassy soprano proved an apt match for the rangy difficulties of the title role until she tired and went flat during the grueling final scene. Her intelligently conceived acting of the teenaged princess was at first hobbled by the dowdy balaboosta frock assigned her by the Met’s costume department. Once she slipped into male drag for the celebrated Dance of the Seven Veils (in Jürgen Flimm’s muddled 2004 production, a tame gloss on Madonna’s “Express Yourself” video) she projected fierce sexuality.

Salome is a terrific score and thus is always worth hearing, but, on the other hand, so is Macbeth. And at LoftOpera, unlike the Met, the quality of the music is enhanced by the care and imagination put into performing it.

Now, if only LoftOpera would take on Salome, I’d return to the Brooklyn Navy Yard in a heartbeat. 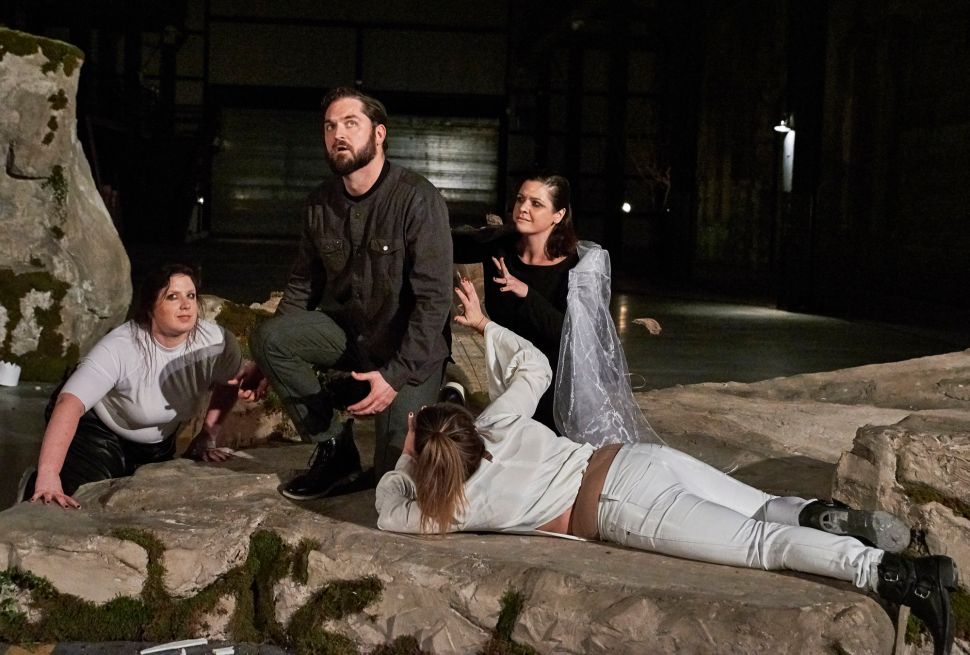