“Really, there’s no magic to making a good production on a small budget. People have been doing it on East 4th Street for decades.”

Coming from anyone but Brianna Maury, General Manager of what is undoubtedly New York’s hippest opera company, LoftOpera, that statement might sound like a load of disingenuous false modesty. But Maury and her stepbrother Daniel Ellis-Ferris are about to demonstrate the kind of magic they weave when their company presents Verdi’s masterpiece Macbeth in, of all places, the MAST Chocolate Factory in the Brooklyn Navy Yard.

The company came across my radar not quite three years ago, when, enraged by some patronizing comments about the troupe from officials of the Metropolitan Opera and the Juilliard School, I determined to find out what, if anything, this LoftOpera was up to. What I found in a drafty warehouse in Brooklyn was a commited, musical staging of Puccini’s La Bohème that was “as true and moving as any I can remember in 40 years of opera-going.”

The LoftOpera story reads like a Millennial’s rewrite of an old Mickey Rooney-Judy Garland “let’s put on a show!” musical. Stepsiblings Ellis-Ferris and Maury (his dad is married to her mother) used to spend weekends together as kids, putting on shows for their parents and taking apart computer components to figure out how they worked. (“That’s probably what makes us such good collaborators now,” Ellis-Ferris says.)

While Ellis-Ferris, who is 27, earned degrees in religion, media and voice from the New School, Maury, now 26, bounced around schools before joining a startup. Then Ellis-Ferris launched a performing career (he’s a baritone) singing gigs with Dean Buck—who’s now LoftOpera’s conductor—and a band in Brooklyn loft spaces. More or less simultaneously, an idea occurred to the stepsiblings: why couldn’t an opera be produced like a rock concert or a dance party?

Since their first production, Don Giovanni in 2013, the company has put on its improvised stages some of the most memorable performances seen in New York in years. A real barber trimmed audience members’ hair during The Barber of Seville, and last summer’s staging of Rossini’s Le Comte Ory featured an aerial ballet of nuns.

It’s not just these gimmicks that attract the company’s inevitably youthful sellout audiences; neither is it the rock-bottom ticket prices ($30.00 general admission) or the fact that you can sip artisanal beer during the show. Above all, the performance doesn’t really feel like the stuffy experience you associate with opera: dressing up, surly ticket-takers, red velvet seats. Instead, as the producing team intended, it’s like a cool party, with Maury working the door in her little black dress and Ellis-Ferris shmoozing the crowd inside. (He’s easy to recognize: the most laid-back guy in the room.)

The company has endured a variety of close calls and scrapes, including a change of venue with only a week’s notice for their Così Fan Tutte earlier his fall. But Ellis-Ferris and Maury never seem to sweat.

“We realized pretty early on that what we do sets the tone for the entire company,” he says. “The first time anything bad happens, the first quitting, the first firing, the first venue change, there’s a natural urge to panic. But we realized that our panic just made everyone panic and nothing got solved. Nowadays when things go wrong it’s a natural reflex to calm down immediately and wait until we’re able to make a sane decision. We realized that calmness is a muscle that can get better over time.”

Of their 11 shows so far, perhaps the one they liked best was that same La Bohème that so impressed me. The opera is about a group of young artists who struggle to live through a freezing winter, and, ironically, the venue for the performance could not be properly heated. The audience, already bundled in overcoats and mufflers, all shivered as the heroine, Mimi, entered the stage from an exterior door that also admitted a blast of frigid air.

“It was the polar vortex,” Maury laughs. “But when Liana [Guberman] sang Mimi, you could see the steam in her breath. And it was really magical. The story of Bohème reflected the realities of the production in a lot of ways, actually. “

Macbeth, an 1865 adaptation of the Shakespeare tragedy, calls for a massive chorus, a ballet, onstage combat and magical apparitions—not to mention two of the most demanding leading roles in all of opera. It’s not the kind of piece most small opera companies would dare take on. Shouldn’t LoftOpera feel a little, you know, daunted?

“Well, the whole idea of LoftOpera is kind of counterintuitive,” Ellis-Ferris says. “So the idea of a grand opera in an unexpected space is pretty spot on for us. We always love to tell the big opera stories about love, life, death, and Macbeth has those to spare. “

“In terms of concept and casting, it feels like another level up for us,” Maury adds. “We’re really full steam ahead with the artistic side of this show. And it’s the biggest venue we’ve ever used, 65-thousand square feet.”

Yet even so ambitious an undertaking as this Macbeth seems almost pedestrian when Ellis-Ferris states the company’s long-term mission: “We want to figure out how to create a nationwide change in how people think opera can be done. “

In the meantime, they’re keeping it in the family. Maury’s mom is flying in from her home in California for Macbeth, which runs December 8-18.

“Actually,” Maury smiles, “She’s sewing a bunch of the costumes for the show.” 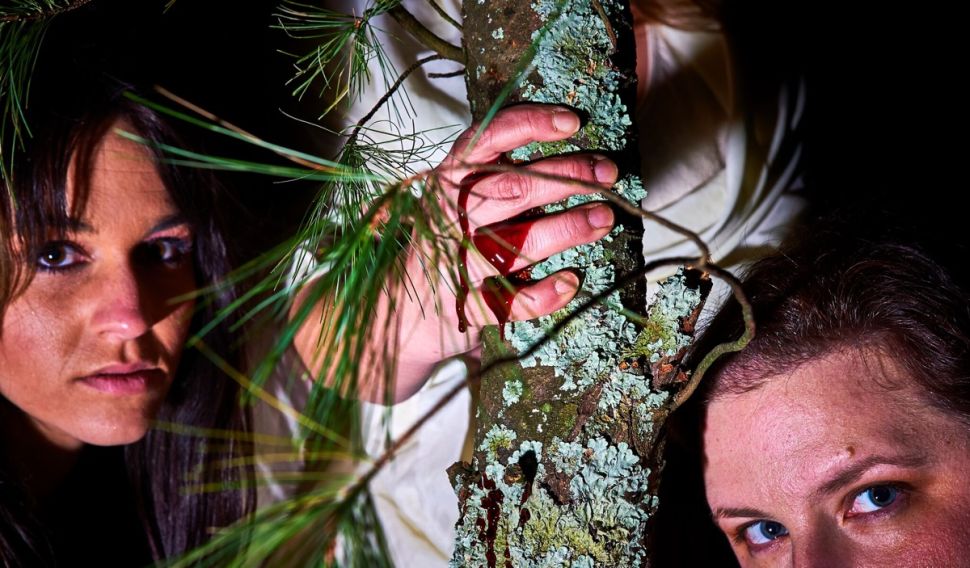