If you told my 15-year-old self, as she scurried to the school bathroom with a tampon hidden up her sleeve (not to mention my 20-something self that just did the same thing at the office), that talking about periods would one day be the norm, I probably wouldn’t have believed you. Especially if you mentioned that such a topic was freely discussed at work, the gym, the Olympics and on the subway. I would also be in a hurry, because I had a tampon up my sleeve.

As a teenager of the early aughts, we may not have been sent to a cabin in the woods during that time of the month or even worn sanitary belts like our mothers, but Are You There God? It’s Me Margaret was still considered a dirty read and we all cringed a bit when Cher Horowitz talked about “surfing the crimson flow” in Clueless. Thanks to a rise in conscious consumerism, social media forums, and forward thinking companies like LOLA, an organic tampon startup, the period industry is hot right now.

LOLA, by the way, is a direct-to-consumer brand that offers monthly online subscriptions of one box ($10), containing 18 tampons, or two ($18). On December 12, after only two years in business, the sanitary care company announced a Series A funding round of $7 million, led by Spark Capital, with additional investment from Lerer, Brand Foundry, BBG Ventures, BoxGroup, and the “It” girl of health advocacy, Lena Dunham. Prior to this round, LOLA had raised $4.2 million to-date from investors including Dunham’s Girls co-star Allison Williams, model/entrepreneur Karlie Kloss and the founders of Warby Parker, Sweetgreen, Bonobos, and Insomnia Cookies.

December has been huge for the LOLA team! We launched pads and liners and raised our Series A (with new investors Spark Capital and @lenadunham)!

“I invested in LOLA because I believe their product is removing stigma from women’s reproductive processes while also giving us healthy, stylish options for taking care of period business,” Dunham said in an official statement. “As an advocate for women’s health and a lover of female run businesses, this relationship is just a natural fit.”

Earlier this month, LOLA, which was founded by Dartmouth and Wharton grads Jordana Kier and Alexandra Friedman, introduced pads and liners, catering to the more than 75 million American women projected to use the product category by 2020. According to Friedman the $15 billion industry was ripe for a product like this, as the category has more or less been stagnant since the 1930s, when the tampon first came out. As more transparency has been brought to the food and clothing industries, there was a disturbing amount of mystery around the product that women inject into their body. While the FDA does regulate the feminine care industry, none of the big tampon brands are under any obligation to disclose what’s in their products. Most women simply assume that tampons are made of cotton and call it a day.

“Women don’t know what’s in the products they’re using and they don’t have a natural alternative. We wanted LOLA to be that natural alternative and be a brand built by women and for women,” Friedman told the Observer. “We are in a natural product evolution, where people are thinking about the things that go on and in their bodies. They’re conditioned to look at the side of the box and think ‘What is inside this?’ Conscious consumerism is at its peak right now and it was only a matter of time before it spread into periods.”

LOLA tampons have compact applicators so they can fit in any purse (with enough room for all of your other necessities). #regram from @madamandrews

LOLA’s Seamless-like delivery appeal allows this startup to fit into the millennial headspace, but the brand aesthetic does, too. Their Instagram feed is as fun and clever as any other lifestyle brands, filled with jokes about caffeine addiction, lazy Sundays and quotes like, “I plan my outfit based on how much food I plan on eating.” It’s also surprisingly refreshing to see one of those cute purse pictures realistically depicting a tampon, alongside lip gloss and mints. Friedman noted that the open discussion about menstruation on social media has contributed to the growth of this industry as well. That image of a “fenced-in area in the Adirondacks” Avery Jessup of 30 Rock had to go to when she “scheduled” her period once a year is becoming more and more of a distant memory. Today she could just talk to someone about her feelings.

However, pitching a feminine hygiene product to a group of male venture capitalists has proven to be a beast of its own. Friedman had plenty of stories to share about teaching male VCs all about periods. One of their favorite questions was when a potential investor asked if women use the same tampon throughout their entire period. “We love those conversations,” said Friedman sincerely. And it seems as if those conversations have paid off; just take a look at their impressive list of backers.

With LOLA, you can customize your assortment of super+, super, regular, and light tampons (because you know your cycle best!)

“We’re really engaging with customers on a daily basis and that is part of the magic here,” said Friedman. “They are telling us what products they want, what content they want [on their blog The Broadcast], and we are building in response to that.” She noted that people email and call them from the bathroom; it’s the equivalent of super star entrepreneur Sarah Blakely, founder of Spanx, being flashed by her customers in the streets.

LOLA has some stellar competition with brands like Thinx, The DivaCup, Cora, and LoonCup, but with this new round of funding will help support employee growth, innovation and expansion. “Looking ahead we want to build a big women’s health brand and get them the products and content they need across the reproductive cycle. We’re super excited to innovate across the spectrum,” said Friedman. “People want to talk and it’s a totally new thing to have a group of women start a brand that is accessible that you can reach.” Perhaps soon Are You There God? will be moved to a slightly lower shelf. 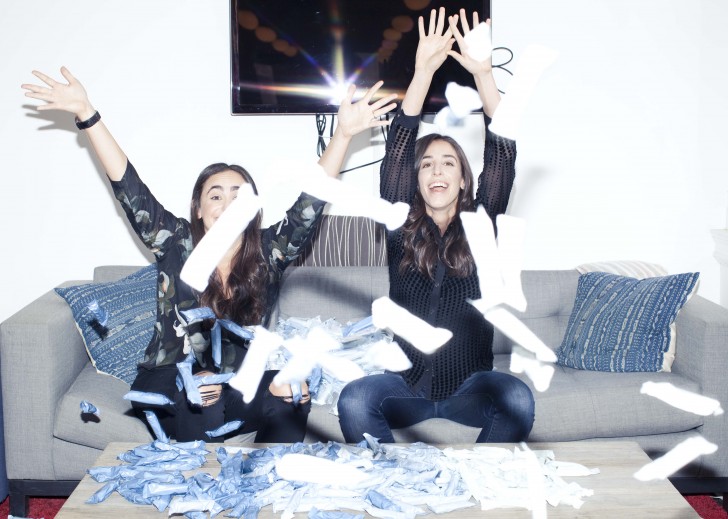