While President Obama’s administration transitions out of the White House, several top Democrats are scrambling to save their careers in the face of an embarrassing exit.

Attorney General Loretta Lynch expressed regret during an interview with CNN over her unethical, highly controversial meeting with Bill Clinton on a Phoenix tarmac just days before the FBI concluded their investigation into Hillary Clinton’s private email server. The meeting provoked outcries from Republicans and Democrats, as it posed a serious breach of neutrality and nonpartisanship that the Department of Justice is supposed to uphold. Lynch’s reputation was irreparably damaged by the meeting, and her recent comments are nothing but a last-ditch attempt to defend her legacy publicly before she moves into the job market.

Bill Clinton told an audience at a New York bookstore earlier this month that Donald Trump’s win was a result of angry white men, (a category into which Clinton himself falls). Clinton displayed no introspection over his wife’s campaign, constructive feedback on what they should have done differently, or could do to move forward. Instead, he focused on denigrating scapegoats and citing excuses for why Hillary’s “turn” to be president was denied.

Democratic National Committee (DNC) interim chair Donna Brazile has made several desperate attempts to obtain relevancy before her term comes to an end; this included pretending to support the Standing Rock protests, and repeating claims of Russian interference in the election. Since Brazile first became a presidential campaign strategist in 1984, she has yet to work on behalf of a winning candidate. CNN severed ties with Brazile in October after it was exposed that she helped the Clinton campaign cheat before CNN debates. Brazile’s poor leadership, coupled with her violations of the DNC charter while serving as vice chair, has made the possibility of her continuing as DNC chair impossible—even among Clinton partisans.

After overseeing an abysmal campaign for Hillary Clinton, Andrew Parkhomenko, her grassroots campaign director and founder of the Ready for Hillary Super PAC, is running for a promotion to one of the DNC’s vice chairs. Obama criticized the Clinton campaign after the election for ignoring states in the Midwest. Campaign staff even turned away volunteers in Michigan because their strategy was to give Trump’s campaign the impression that the state wasn’t up for grabs. So much for grassroots.

Pro-Clinton puppet David Brock called the press “animals who needed to be treated like animals” in a recent interview with Politico. This is coming from someone who ran several propaganda media outlets through pro-Clinton Super PACs, one of which hired internet trolls to “correct” criticisms online about Hillary.

While Brock and his fellow Clinton propagandist Peter Daou attack the mainstream media for Clinton’s loss, the pro-Clinton mainstream media in turn has resorted to elevating the issue of “fake news” as the reason Trump won.

The recount effort and push for electors to switch their votes to Clinton inspired hope that she could still be president, but those efforts failed to produce anything other than prolific fundraising strategies for individuals and organizations. In the end, more electors wound up defecting from Clinton—four in Washington—than they did from Trump.

Democrats have focused on propagating self-serving narratives, rather than working on strategies for recovery of the Party or on plans to hold Republicans accountable under the imminent Trump presidency. Despite suffering drastic losses across the country over the past decade, establishment Democrats are repeating their same mistakes, absorbed in political expediency and courting wealthy donors rather than figuring out ways to reconnect with working and middle class voters. 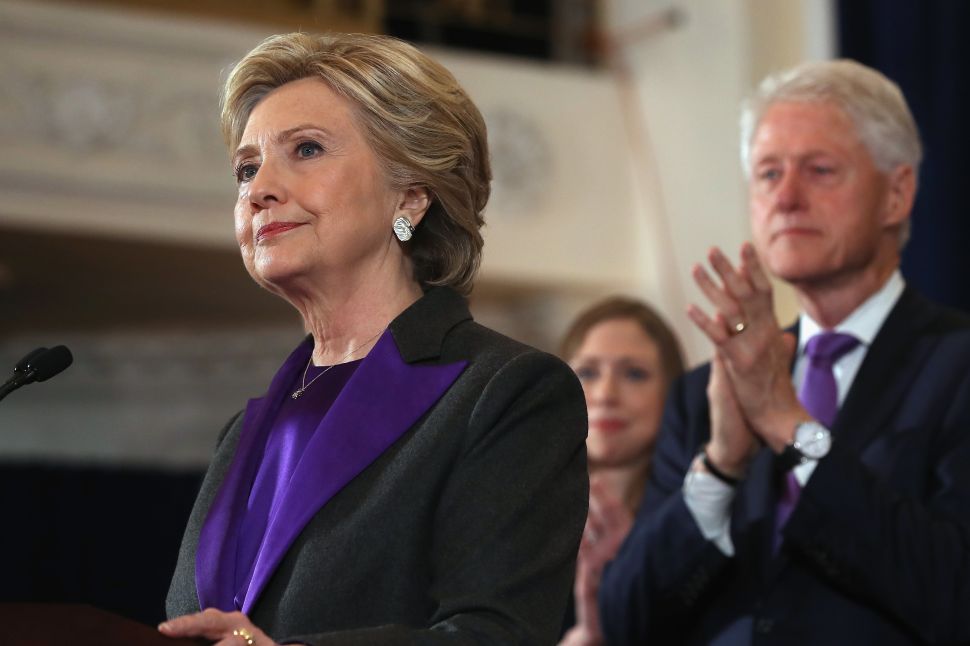