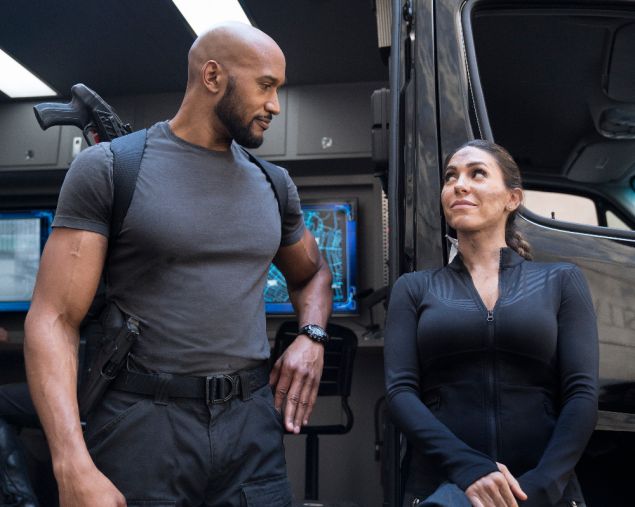 Even though this is the second episode after a month-long break, Agents of S.H.I.E.L.D. is having a midseason finale because momentum isn’t something they care about apparently. Last week was about getting the agents back from the ghost dimension so they can take on Eli Morrow and this week we finally get to the climax they have been building to.

So what’s Eli doing? Well, he’s making a big, weird, glowing chamber but turns out his hired help hasn’t actually seen any money and the cops and S.H.I.E.L.D. are outside and they are starting to have some doubts in leadership. Eli quickly puts those fears to rest by paying the men by creating diamonds inside the lungs of one of the complaining members and tells the other men to cut him open if they want more. Pretty dope power move.

News crews are outside of the building where Eli is executing his master plan and Director Mace is trying his best to keep the situation under control. Coulson suggests using Daisy, Yo-Yo and Robbie to stop Eli but Mace is less than enthusiastic about the idea of using a still-wanted terrorist and a demon serial killer. Coulson reminds Mace that Robbie is unstoppable and is on their side and that they need all the help that they can get. No matter how many episodes we go through, people just can’t remember that Robbie is the only one that has managed to stop any of the Darkhold-related stuff. Coulson also believes that Aida can be of some assistance prompting him to reveal that she is an android. Despite Mace’s shock that people haven’t seemed to learn anything since Ultron (as well as revealing a slight attraction to her), Mace agrees to let Aida join the mission as long as she’s dismantled after.

With the go ahead from the director, Daisy, Yo-Yo, and Robbie are ready to storm the building. Yo-Yo runs in to do some reconnaissance only to trigger an explosion and gets hit from the blast. It turns out Eli created Caesium (which is apparently the most active metal on Earth according to Google) and Fitz realizes he’s testing the limits of his powers. Fortunately fire doesn’t scare Robbie at all and he heads on into the building. He takes out a few goons and finds the chamber Eli has created. It’s a quantum battery, similar to the one that was in the lab that first gave Eli his powers but this is on a bigger scale. Fitz has seen the set up before and realizes it’s called the Demon Core (because of course it is) and that it’s basically a fail-safe. If something messes with it, it activates the plutonium within (which Eli made from scratch) and everything goes boom. But before Robbie can do anything about it, he confronts his uncle and blames him for everything only to get stabbed by some carbon spikes preventing him from transforming. He is also facing radiation from the quantum energy in the chamber and Eli realizes the prison rumors of Ghost Rider were true and realizes it’s been his nephew this whole time. 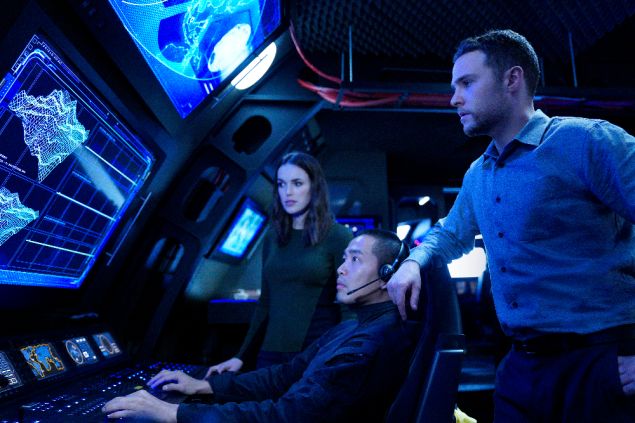 The agents still don’t have much of a plan. Yo-Yo is patched up from the blast and Mace wants her back in the fight as soon as possible only to get in an argument with a very heated Mack. Yo-To and Mack are still having their little lovers quarrel. Daisy has been feeling an increasing amount of seismic activity that Fitz is looking into and the lack of trust towards Mace finally reaches a tipping point as both Coulson and Daisy confront Mace about his dealings with Senator Nadeer. Turns out it’s all pretty simple, he gave Nadder Jemma to examine the Inhuman just so Nadeer wouldn’t release the photos of Daisy and Robbie during the prison incident – Nothing too sinister. Mace does however show a glimpse of uncertainty, which is something we don’t see often from his confident demeanor. He doesn’t believe they are a team, but Coulson is determined to prove just how great of a team they can be.

Back in the building, Eli is creating now; elemental compounds that he says are the first step to being able to create life. Coulson appears at gunpoint with some of the thugs and delivers a beautiful line that Eli should “get a girlfriend first.” He might be held prisoner but he did bring a chain (!) so fingers crossed Ghost Rider will be able to use it. Underneath them however, the rest of the agents are putting their plan into action. Now it was tough for me to keep up with this logic here. I had to rewind five times just to see if I understood the plan. See, Fitz believes Eli isn’t creating matter from nothing. According to the law of conservation of energy, energy can neither be created nor destroyed. And even though Eli is power hungry, he doesn’t realize the matter is coming from the quantum energy from the other planes of existence. As he steals more energy, the tremors get worse. To stop Eli, Aida is going to rebuild the gateway to try and get rid of the potentially explosive quantum chamber. The process requires Daisy to control the building tremors and to keep Eli and his goons from killing all of them. There are some small moments where Aida is watching the agents in almost a studious way and I feel like it’s important to point it out and remember for later.

Eli reveals the Darkhold told him he can create life after death and Coulson realizes the chamber isn’t a failsafe but an actual bomb Eli intends to use. Acting fast, the agents move in with May and Mack taking out some of Eli’s gang and Yo-Yo doing a super cool slow motion run through the room. Even Mace is suited up in an armor suit of sorts and is tossing people around. Downstairs the agents are dealing with their own firefight as a gang member shoots Aida. Coulson tosses the chain to Robbie who turns into Ghost Rider and tries to pull himself away from the spikes sticking through him but instead lets go of the chain and chooses to burn up Eli instead. And in that moment the fail-safe goes off and the explosion happens only for the chamber to disappear thanks to the gateway. 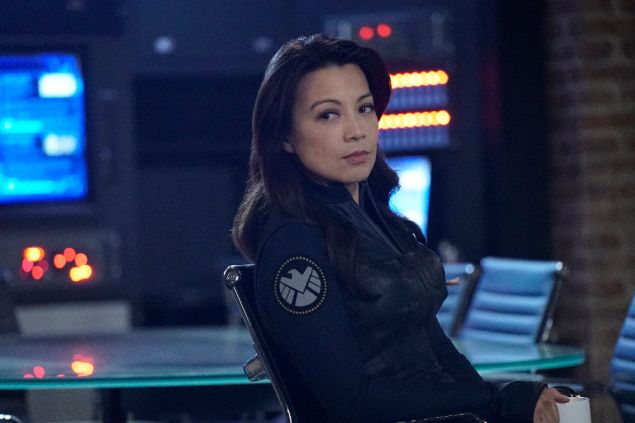 Although Aida is bleeding out on the floor, she reveals she was programmed to react to pain just like a human would to better help her fit in as an actual target on missions. She’ll be fine, but that doesn’t mean she enjoys the process. Daisy is struggling after absorbing all the quakes and has to step outside quickly. She runs out and blasts herself into the sky and ends up landing right in the center of all of the news teams who quickly identify her as Quake. Mace steps in right on time to say she was the one that saved everyone and even calls her Agent Johnson.

Later, she mentions to Coulson how Robbie’s car should go to Gabe but Coulson doesn’t believe she should lose hope yet. He even mentions that the last Ghost Rider came back which could be a reference to the Johnny Blaze version we possibly saw in the flashback episode. It also could mean S.H.I.E.L.D. knew about Ghost Rider way before Robbie. All he says is it’s a long story, which means we might never get an answer.

Daisy is asked if she wants to be an agent again and she says there are definitely parts she misses and is also happy the new face of S.H.I.E.L.D. is an Inhuman. Turns out, Coulson actually wanted her to be the new face but Daisy only says, “maybe in the comic book version.” Beautiful. Also Mack and Yo-Yo kiss, so, yay. They can stop fighting, Daisy can stop whining, and everything should be good right? WRONG! Mace approves Radcliffe to work on the LMD program at S.H.I.E.L.D. and that means bringing his research over here. Agent Nathanson is the lucky guy that gets to go do that. And you don’t have to remember that name because as he is packing all of Radcliffe’s things up, he stumbles upon something shocking in a closet. So shocking that Aida shows up and snaps his neck after seeing it! What is it? Turns out it’s an unconscious May covered in blood. Wait? But if May is there, who is having a drink with Coulson at the end of the episode?! Is this May a robot? Is that why Aida is so keen on watching people? Is she learning from them so she can make copies of the agents? If you can’t wait for 2018 for the second season of Westworld, I would suggest coming back to Agents of S.H.I.E.L.D. in January for all of your robotic nightmares. Until 2017, True Believers! 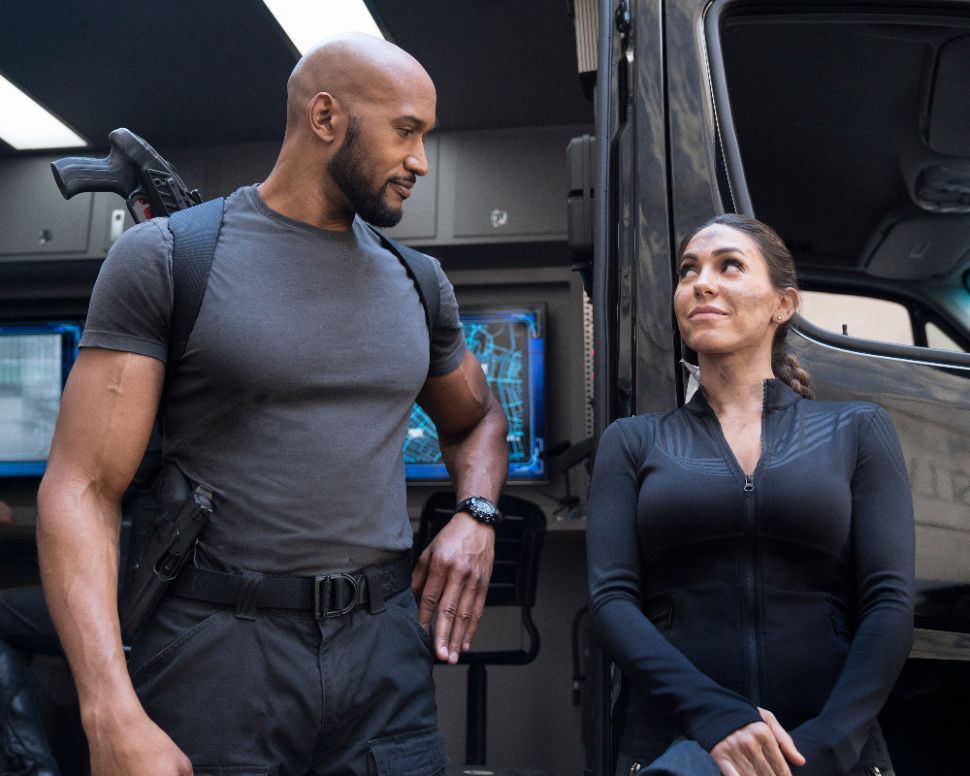