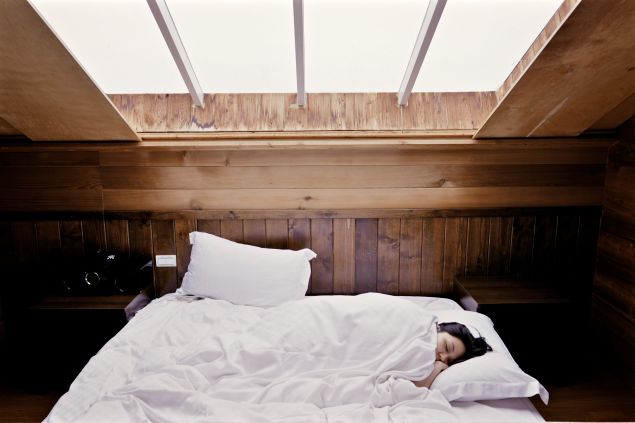 Get out of bed…or at least download this app! Nomao Saeki/Unsplash

In late October, in the near immediate aftermath of the end of a two year relationship, a weird bit of advertising got stuck in my mind. “There’s an app for that.” It echoed in my head, like a very successful marketing earworm.

In spite of being the daughter of one of the best psychologists in the area, having my own therapist, a handful of healthy, lifelong friendships and (perhaps most importantly) a class pack at SoulCycle, I couldn’t help but wonder what an app made for those grey, dark days in the immediate aftermath of a breakup might look like. Sure enough, the app store offered more than one result that promised to help fix my broken heart.

I immediately gravitated towards Mend for its simple interface, as it seemed more appealing than other apps, most of which offered little more than biblical cures in the form of inspirational quotes and psalms. So I downloaded Mend—without hesitation, but with a healthy dose of skepticism. I’ll use this once, I assumed.

Three days later, I felt that Elle, whose voice coaches you through each day’s short session (a micro-lecture of sorts), was my friend. This is the magic of the app that the real Elle, Ellen Huerta, has created. I decided to email the founder and I told her what I just told you: “I’m probably not your average customer,” I explained. (I had already shelled out $9.99 for a one-month, zero-commitment membership by the way, so I wasn’t looking for a freebie). 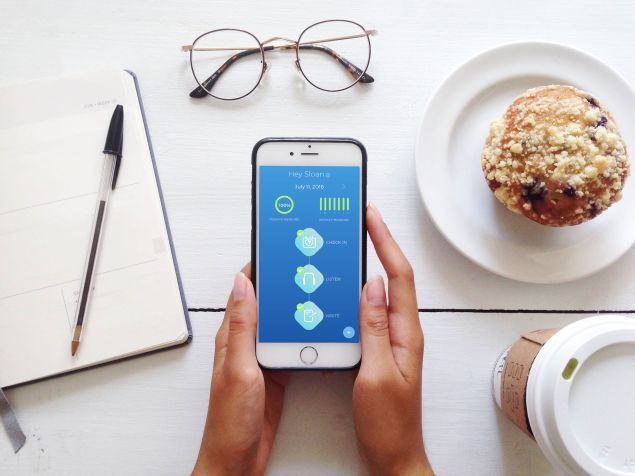 Inside the Mend app. Courtesy Mend

She replied promptly: “I was in your same shoes when I started Mend—I don’t have a parent who’s a therapist, but I did have access to therapy and a lot of great resources and still felt completely lost post-breakup.” If Elle and I were in need of Mend, I couldn’t help but think about all the other women (and men too), especially those who might not have access to therapy or other resources, and could use some kind of daily ritual. Just three minutes a day, to help provide structure to the inherently messy aftermath of the dissolution of any long-term, serious relationship.

“A lot of people,” Huerta explained over the phone, “feel like they don’t have anyone that they can really talk to about their story. I think that a lot of it has to do with the fact that many millennials live far from home, and don’t necessarily have a community available to them. We’re very connected online, but a lot of the Menders [ed. note: that’s what Elle calls the community of users her app has created] feel like they have no one they can actually talk to about a breakup, which is such a big thing.” In addition to the daily trainings, Mend offers an online community where stories are shared. This allows users to access a variety of content, as much and as often as they might need. This is a crucial part of Mend’s offerings. Though, I should note, it was really Huerta’s carefully constructed, and clearly well-researched daily “trainings” that sold me on her program.

Mend’s origin story follows a formula you’ve likely heard before. It goes like this: Person experiences life event, seeks solution, doesn’t find solution, decides to create it. Formulaic, in this case, is not a bad thing. After all, breakups are perhaps the single most universal problem a person can have. Almost all of us humans on earth, regardless of sex, orientation, race, religion etc. will experience heartbreak at one point. And that’s where Mend comes in. “I felt kind of helpless, like I needed some kind of structure, so I essentially created what I would have wanted when I was going through a breakup, which is like a personal trainer for heartbreak,” Huerta said.

“The initial idea was to build a place online where there could be great breakup advice—that was grounded in some kind of research and science, and also a place to share stories, because I found that one of things that was most helpful to me when I was going through that breakup was just reading other people’s stories,” Huerta explained. So she launched a newsletter, as it was the quickest, simplest, and cheapest way to get started. Word spread and slowly friends, friends of friends, and friends of friends of friends were asking for a destination that would allow them to access the newsletter content as they needed. At that point, a content site was born. 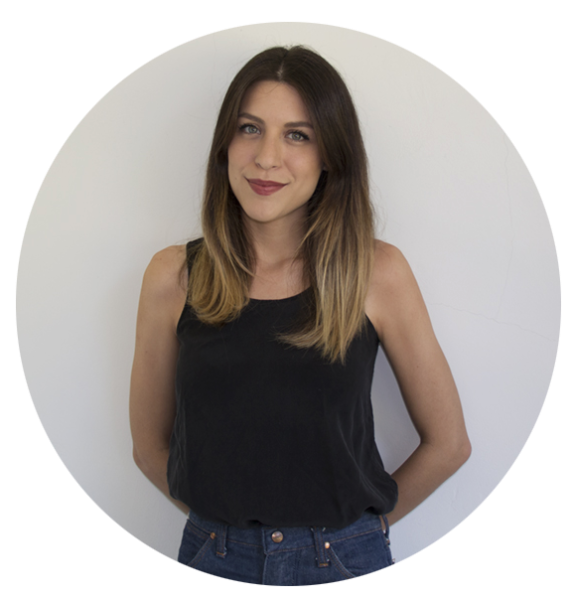 Still, Huerta explained, “There was an aspect missing, which is what our app has filled in. Just like a more engaging experience, something you can really have with you day-to-day. And that’s where I spend all of my time now—working on the app.”

Mission accomplished. Mend brings together schools of thought from hard data and scientific research to nutrition, to yoga and mindfulness to create a well-rounded approach to healing heartbreak. You’ll begin with the heartbreak cleanse—“You go through a really intense, critical, post heartbreak period where it’s hard to put one foot in front of the other. We’re just trying to help you take care of yourself, get out of bed—it’s really basic at that point.” Mend acts as your first line of defense, day in and day out, as you trudge through those muddy, emotional waters of the immediate aftermath.

The recordings offer a small, but often potent fix and I found myself humbled by the emotional support this app offered—playing through headphones as I picked up lunch on unbearable office days, or lulling me to sleep as I readjusted to my own bed.

If your breakup is brand new and you download Mend, you might be surprised that no time is wasted in encouraging you to let go. Are you kidding me? I remember thinking, half-seriously. But in truth, planting that idea (yes, right away) is not a bad idea.

“We don’t want to be too prescriptive about when somebody should be moving on from that critical, ‘triage phase’ into the ‘moving on phase,’” Huerta pointed out, but, “a lot of times we just try to plant those ideas. The concept of letting go is so important to start to internalize after a breakup, and it’s the hardest thing to do.”

“It’s the same with forgiveness,” she notes. “So many people are like ‘how could I forgive this person?’ And so our goal is not to force you to forgive someone in a three-minute training but to help you begin to think about these ideas and be more proactive about it.”

Finally, lest you think your newfound app-friend leaves you for broke once you’re back on your feet, you’d be wrong. I asked Elle how many days one can spend with her, expecting maybe 150 days worth of sessions at most. Instead she said simply, “forever.” Because of course, then there’s the “moving on phase,” which is focused on people who are “past the really difficult part of a breakup and are sort of looking at the next chapter.”

This could mean that they’re not ready to date and they’re just rebuilding that sense of self, that they’re preparing to date, or that they’re actively dating. “We see a lot of different types of people, but they continue to use the app because they still want emotional support. There’s so many things that you experience and have to process and go through as you go into the next phase: meeting new people and beginning another relationship.”

Just shy of two months post-date-of-breakup, I’m so happy to credit Huerta’s innovative app with feeling like I’m back on my feet. Have I ‘let go,’ as the app encourages one to do? Maybe not 100 percent but I’m getting there—one three minute recording at a time. 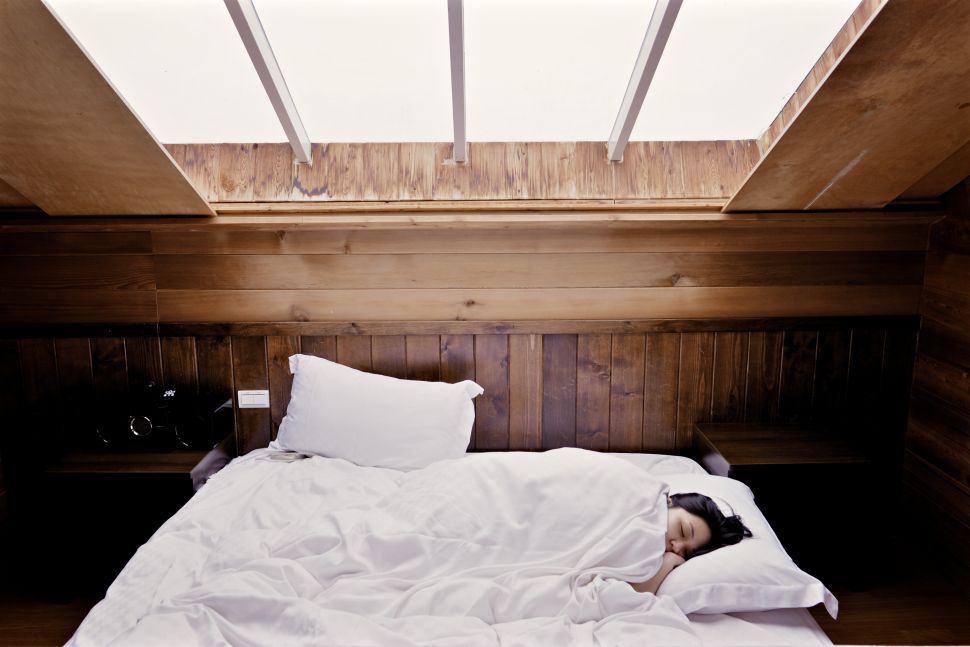