Christmas, and by extension, Christmas music, is big business. This season we can add new albums by Neil Diamond, She and Him, Sarah Mclachlan, and Jimmy Buffett to the inevitable surplus of holiday-themed releases.

The impulse to create a Christmas record may seem calculated, but commerce isn’t the only reason artists from Brian Setzer to Kyle Minogue churn out Christmas music; some people genuinely like this stuff.

We may complain about the so-called commercialization of Christmas, but the real issue is the media’s annual emotional manipulation. The holidays can break through our defenses, and in this particularly vulnerable year, we’re no different: We are made to feel like failures if our Christmas is not sufficiently cozy, purifying, and full of familial reconnection.

Though Jewish, I can’t pretend to be an impartial observer of Yuletide music. As a songwriter, I’ve collaborated on many Christmas tunes, a few of which have even found their way into films. Still, the first time I played holiday music was for a Hanukkah song contest hosted by a friend. I felt some pride when the song made it onto a Christmas compilation album a few years later, the only Hanukkah jam in the bunch.

I know I’m not unique. There’s a rich tradition of Jewish songwriters crafting Christmas music. Irving Berlin, a Russian-born Jew and son of a synagogue cantor, famously composed the standard to end all standards: “White Christmas.”

Yes, the biggest-selling single of all time is a Christmas song written through the eyes of an outsider observing the secular world.

That Berlin’s own family spoke Yiddish at home, says much of the universal nostalgia the holiday season evokes. Few are immune to its charms. Certainly not me. So early December seems like the perfect time to explore a few recent additions to the holiday music canon.

Acoustic Christmas isn’t Neil Diamond’s first trip down Santa Claus lane; he released Christmas music in 1992, 1994, 2009, and 2013. Right off the top, Diamond is in his element on a version of “Oh Holy Night.” Never one for understatement, Diamond’s voice crackles with his unique brand of over-emoting. He’s a master of milking a lyric for all its worth. The birthday of Jesus makes for fine subject matter, though the stoic religiosity of the lyrics is a bit severe in Diamond’s hands. But by the time we get to “Christmas Prayers,” Acoustic Christmas’ corniness is comforting as waking to a warm fire.

Diamond’s serious-ass hymns are generations removed from She and Him’s hipster good humor. Remember the scene in Elf of Buddy listening innocently as Zoe Deschanel sings “Baby It’s Cold Outside” in the shower? That moment was the mustard seed from which grew A Very She and Him Christmas.

Unlike Diamond, Deschanel and her collaborator M. Ward possess impeccable taste and instincts. Producer Ward, who favors vintage gear and a folky instrumentation, imbues the album with a reverb-drenched old-timey vibe. For her part, Deschanel sidesteps any questions of integrity with her modest and appealing voice. Have an adorable holiday, She and Him seem to say.

Wonderland by Sarah Mclachlan is as glossy as holiday records get. Like Diamond, Mclachlan has done this before. She released another 10-lettered-X-mas-collection, Wintersong, back in 2006. On Wonderland her pipes still break into flawless falsetto midway through words. Mclachlan gazes down from above like Clarence in It’s a Wonderful Life.

Her version of “Angels We Have Heard On High” is stunning. Beautiful. Transportive. Accomplished. Unlike the small-scale approaches of Neil Diamond and She and Him, it sounds like a cast of thousands created Wonderland. But why be cynical? The listener is in good hands here. Nothing wrong with that.

Jimmy Buffett was born on December 25, 1946, so the man has major Christmas cred. ‘Tis the SeaSon opens things up with one of my secret seasonal favorites, “Wonderful Christmastime” written by Paul McCartney. Buffett even throws in a bonus steel-drum solo. He later brings in Jake Shimabukuro, the Jimmy Page of ukulele, to add some island flavor to “Mele Kalikimaka,” a Hawaiian classic once recorded by Bing Crosby. Buffett knows the best way to make a killer Christmas record is to make a killer Jimmy Buffett record.

Eight years ago, in a cabin on British Columbia’s beautiful Sunshine Coast, my-wife-to-be and I were hit by a mid-summer songwriting bug. The juxtaposition of the perfect July weather and the Yule music we were recording was curious but somehow fitting. Our rustic home was a ferry ride away from the city; deer wandered across our front yard. In short, the perfect setting for composing Christmas tunes.

With no snow in sight, we relied on memories to inspire us. In addition to writing, we covered both “Christmas Time is Here” and “Put a Little Love in Your Heart.” The latter was co-written and recorded by Jackie DeShannon in 1969 but popularized by Annie Lennox & Al Green in the 1998 Bill Murray movie Scrooged. The former was one of Vince Giraldi’s melancholy little numbers from A Charlie Brown Christmas. Neither song felt like too much of a staple, so they seemed like fair game.

It felt right to tap into the cultural archive of Christmas nostalgia, to let go and glide toward the hopeful, magical Noel of movies. Working on those songs, I became an active participant in a significant mainstream experience.

Perhaps Irving Berlin felt the same sense of inclusion when he wrote about the snowfall outside his window. Or maybe the holiday is truly secular at this point, open to many non-religious interpretations. At its best Christmas music is unifying in its utter uncoolness. If the saccharine sentiments of these songs strike some of us as nauseating, at least they come but once a year. 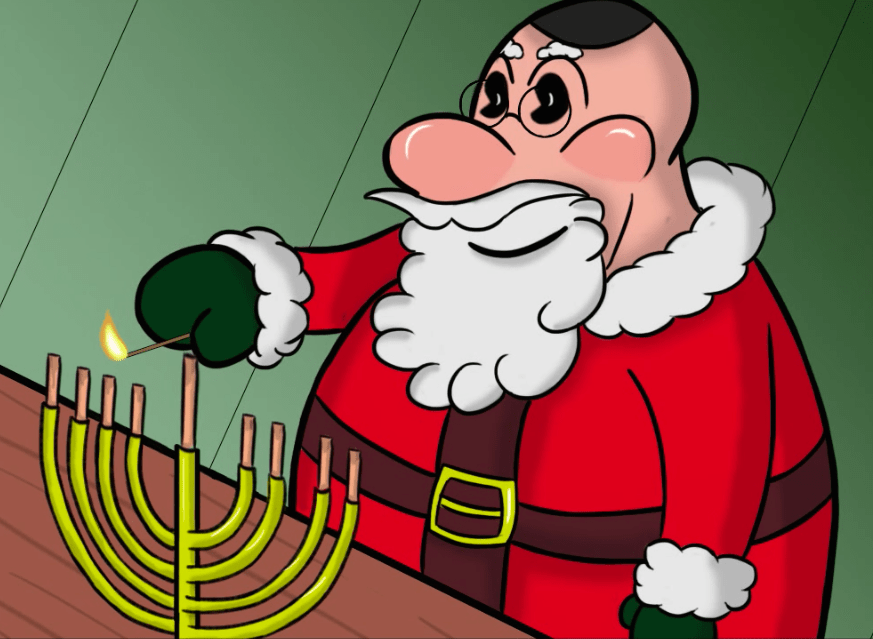