New York’s 29 Democratic electors may have been heartbroken while casting their votes for Hillary Clinton after her bruising loss to Donald Trump last month, but they made sure to send a final riposte to the president-elect’s anti-immigrant rhetoric—by donating their Electoral College salaries, a total of $435, to a prominent immigrant policy and advocacy organization.

“I now move that the electors of this College unanimously agree to forego their compensation as electors and have the money designated to an organization which assists the brave men, women and children wishing to make United States their home: the New York Immigration Coalition,” Heastie said during the vote yesterday.’

NYIC has nearly 200 member organizations and works to increase immigrant community leadership and civic engagement as well as having immigrants included in major public policy debates.

The move came a day after the coalition led a “March for Immigrant New York” from Dag Hammerskjold Plaza near the United Nations to Trump Tower that drew more than 1,000 people and was sponsored by 85 organizations representing immigrant rights and advocacy, legal services, labor, faith, civil rights, LGBTQI, women’s rights and anti-violence groups. James and Mark-Viverito were among the marchers.

“I think it’s an act of defiance and an act of resilience and a symbolic way of saying to Donald Trump that the electors stand with immigrants, you know, and that they are not going to stand for a person who has used an anti-immigrant platform his entire campaign,” Thanu Yakupitiyage, NYIC’s senior communications manager, told the Observer in a telephone interview. “He may be the president but he needs to be the president for all of us and that includes immigrants and refugees and all of us. When I say immigrants, I’m really talking about all of that.”

She said that the electors each got paid $15 for carrying out their duties, noting that the funds can assist the organization in financing its rapid response work plan, a number of planned community town halls, maintaining Deferred Action for Childhood Arrivals—an executive order President Barack Obama signed that protected undocumented youth from deportation—and more generally protecting undocumented immigrants from getting deported.

And while she commended the city and the state for “responding strongly” and taking leadership to make a statement and commitment to immigrant New Yorkers, she called on both to continue their efforts. She praised the the governor’s emergency legal defense fund for immigrants that he launched last month but called on him to make it sustainable and usable for New York City immigrants. And while she appreciates the City Council’s resolution affirming New York City as a “sanctuary city” for immigrants, she urged the city to ensure that it is actually implemented.

“We know that and we hope that the city and the state will really stand by their words—that these commitments are going to move forward into the new year because Donald Trump is going to be the next president of the United States so they really need to stick to their words….because the road ahead is going to be really long,” Yakupitiyage continued.

Cilento said the coalition deserved the funding because of its work to support immigrants.

“I was honored to stand in support of this motion,” he said. “I am hopeful that in some small way this will help draw attention to the important work being done by the New York Immigration Coalition. Immigrant New Yorkers now more than ever need and deserve our support.” 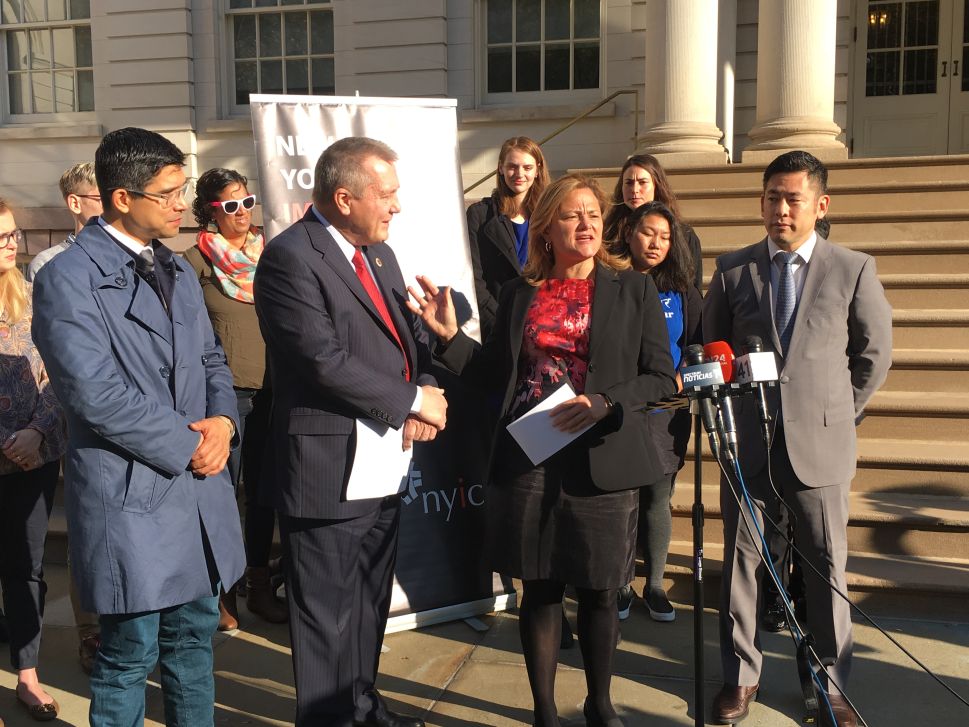