The chairwoman of the City Council’s Committee on Finance said today she’s unsure what federal funding cuts will occur under President-elect Donald Trump but that the Council is preparing and expects to “overcome overcome many of them.”

In his “100-day action plan to Make America Great Again,” Trump said he would “cancel all federal funding to sanctuary cities,” roll back President Barack Obama’s executive actions shielding undocumented foreign nationals who arrived as children, deport what he claims are “more than two million criminal illegal immigrants from the country” and get eliminate of visas to foreign countries that will not take them back. Mayor Bill de Blasio and Council Speaker Melissa Mark-Viverito have vowed to defy incoming administration’s agenda, but have failed to answer how they will compensate for the potential loss of federal funds for police, hospitals and public housing—which city Comptroller Scott Stringer warned last week makes up $7 billion of the city’s yearly finances.

Queens Councilwoman Julissa Ferreras-Copeland, whose committee shapes the city’s annual budget, estimated that the Trump administration could endanger more than 10 percent of the funding the city receives directly from Washington—plus additional federal monies that get channeled through the state.

“We’re analyzing and you know, we just have to be prepared,” she told the Observer after an unrelated rally in her district. “But the reality is that we need to see where he’s gonna cut and what he’s going to do. But this City Council is very much understanding of the difficulties and challenges that we have ahead of us. However, I do believe that we can overcome many of them.”

There is also the damage Trump’s policies might do to the local economy. Mark-Viverito commissioned an analysis earlier this year on the potential price of deporting undocumented immigrants and prohibiting Muslims from entering the country—which found they could cost the city and the state $800 million in tax revenue and bring about a decrease of 340,000 jobs.

“Yea I mean, they’re very real and I think again, these are challenges that we are going to have to face in this next fiscal year and many fiscal years to come,” Ferreras-Copeland said. “This impact could be a long-term one but we are bracing ourselves, we are preparing ourselves, we are recognizing what funds we need to shore up now.”

She added that Trump will start to feel pressure from organizations and communities that are important to the city and that the economy has recently experienced some decline.

The city’s budget for 2017 came to almost $83.5 billion, up from $78.5 billion the year before. Some of the increase came from de Blasio’s addition of roughly 16,000 employees to the public payroll, which he insisted in the face of criticism was “best money spent.”

“Again, it reminds us the importance of savings and being able to provide enough savings in our budget for the future, and we’ve also been seeing that there is somewhat of a slowdown in the economy,” Ferreras-Copeland said. “So a slowdown and the impact that the federal government may have on our economy is one that we are very cognizant of.”

And like Mayor Bill de Blasio, she urged undocumented immigrants to continue applying for the city’s municipal identification card, a stance Mark-Viverito has shied away from. Indeed, Ferreras-Copeland—whose district has the largest number of registered IDNYC users—said all New Yorkers should be applying regardless of their situation.

De Blasio has indicated he intends to purge the records of the IDNYC system if the federal government tries to use it as a deportation database. Republican elected officials have threatened to sue the city to stop him.

“You know, some people are saying, ‘Well, what can I do?,'” Ferreras-Copeland said. “I want everyone to register for IDNYC, regardless of your immigration status. From the Mets players that are at Citi Field, right, to every New Yorker should be registered for IDNYC ’cause that is the best way for us to protect our immigrant families.” 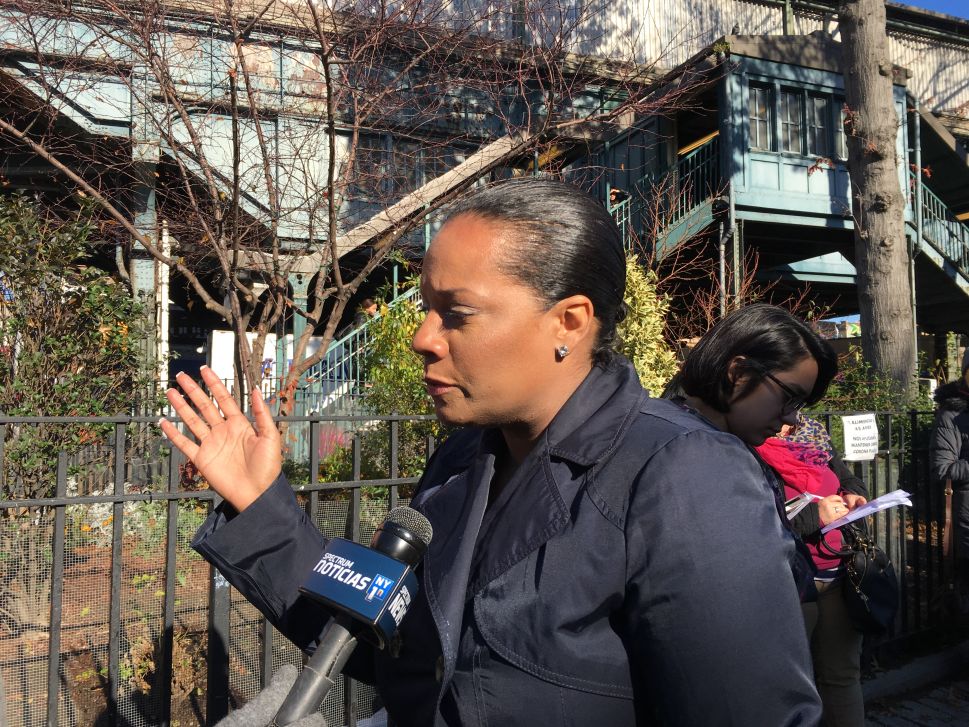