Green is my favorite color, and it’s very hard for me to understand why that’s not the case for more people. So I was especially delighted to learn that Pantone’s Color of the Year for 2017 was a shade called “Greenery.”

A news release describes the color as “a fresh and zesty yellow-green shade that evokes the first days of spring,” and Pantone Institute CEO Leatrice Eiseman says the hue will “provide us with the hope we collectively yearn for amid a complex social and political landscape. Satisfying our growing desire to rejuvenate, revitalize and unite…”

In more simple words, green is a feel good color to rally around. I’m sure this has been said of a good many other things, but it’s especially true in this case: some of the best things are green. Let me tell you why.

Green Plants
Literally, a huge swath of life on planet Earth is green—at least for now, before it all crumbles into smoggy ruin, or falls into ocean. Actually, most of the planet is blue, and getting bluer by the day as the ice caps melt, but why concern yourself with such tedious facts. A single leaf produces approximately five milliliters of oxygen per hour, and houseplants like ivy both produce oxygen and filter toxins from the air. (Having asthma is no fun, and so now you know why I have so many houseplants.)

Green Foods That Are Naturally Green
Some of the most nutritious foods are green, and I’m not talking about that “Green Machine” smoothie you bought at the drug store. Veggies such as spinach, kale, asparagus, broccoli and everything else I still have to be persuaded to eat regularly as an adult are very good for you because they’re packed with fiber, an alphabets-worth of vitamins, potassium, and anti-cancer compounds. I vow to try harder to work this food group into my diet, but at least their shades of “greenery” are a welcome addition of color to my plate even if I’m just pushing them around.

Green Foods That Aren’t Naturally Green
I’m an equal opportunist, so it only seems fair to mention the veritable cornucopia of faux-green foods that are both delicious and totally unhealthy for you. The caffeine-heavy soft drink Surge comes to mind. As is tradition in some cities on St. Patrick’s Day, foods like bagels and pizza take on a bright green shade that just calls to me. Why make something green that isn’t meant to be green? No one is trying to dupe you into thinking these foods are healthy, but making them green makes them special. That’s why.

Green Power Dresses
Wearing some shades of bright green can be a challenge, but there are a few figures in history who have grabbed the secondary color by the horns and become legendary for their fierce looks. Among them is Vivien Leigh’s Gone With the Wind character Scarlett O’Hara, who fashioned a dress from green drapes to give the outward appearance of confidence and wealth even when she was down on her luck. Jennifer Lopez’s infamous, plunging silk Versace slip for the 200o Grammy Awards sparked scandal for how little greenery actually covered her form as she strutted the red carpet. And to turn an eye to art history (where green pigments have been known to be highly toxic for the user) the bundled green gown worn by Italian merchant Giovanni di Nicolao’s wife in Jan van Eyck’s iconic painting The Arnolfini Portrait has inspired endless interpretations and a book.

Green (Lantern) Mythology
I throw this in not to give Green Lantern more credit than he deserves in the super hero world, but to shine a light on just a sliver of the influence green has had in pop culture, and more specifically to DC Comics’ Lantern Corps. Originally inspired by the green lanterns used by train engineers during the 1940s, today the superhero and his cohorts draw their green strength from the magical source of will power, according to Heritage Auctions’ consignment director Jerry Stephen. The green lantern also has a history in New York City, where in the 17th century Peter Stuyvesant’s crew of “Rattle Watchman” (men paid to patrol) carried green lanterns as they walked the streets, and hung them on the front doors of the local watch house to let residents know they were being looked out for. Today, many of the city’s police stations still hang green lanterns outside. 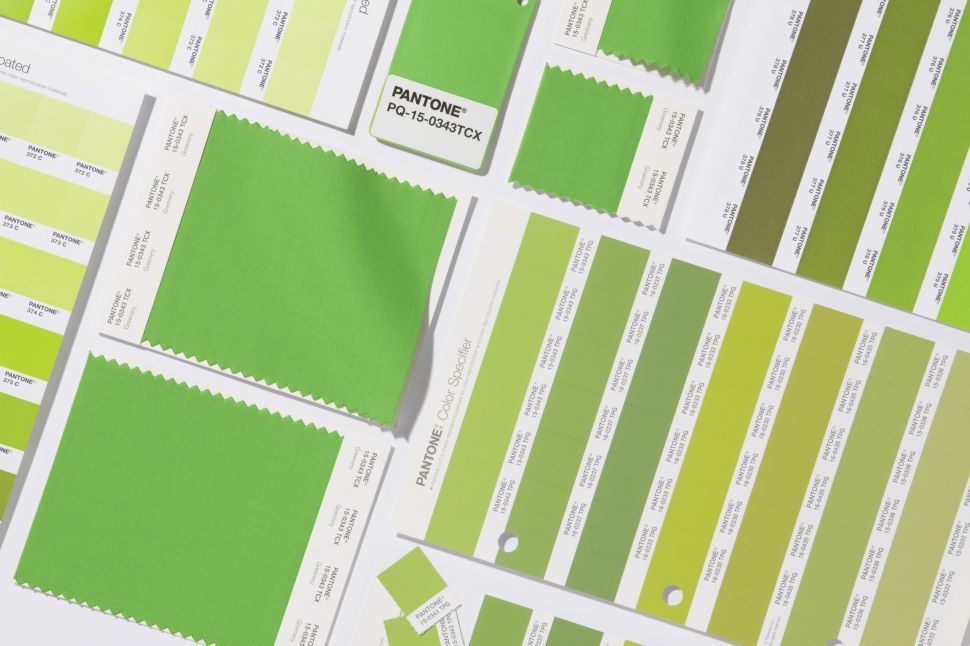