The harrowing, headline-making events on Patriots Day 2013 (April 15) when two Muslim brothers set off pressure cooker bombs near the finish line of the Boston marathon, killing three civilians and one policeman, wounding 264 others and causing numerous emergency amputations, have been painstakingly collated and dramatized in a thriller briskly directed by Peter Berg and starring a dedicated cast headed by Mark Wahlberg. Patriots Day is the third Berg-Wahlberg collaboration and although it doesn’t measure up to the chills and excitement of their first film, Lone Survivor, it does raise goose bumps with its accuracy, realism, and attention to detail. The question is, How big an audience is ready to relive the horror of a tragedy so close to home, especially in the light of the terrorist attacks that continue to assault our senses daily?

Wahlberg plays an edgy cop with personality problems who has fallen out of favor with the Boston police commissioner (newly slimmed-down John Goodman, who has lost so much weight he’s close to unrecognizable). Volunteering for extra duty to cover the marathon and win extra points with his boss, he’s stationed near the finish line on Boylston Street when the bombs go off, surprising the crowds who had gathered to treat the whole day as a holiday, sending people and property flying in every direction, and throwing the city of Boston into a massive panic attack.

Beginning with alarm clocks, waking up, and the rituals of breakfast, the major participants in the chaos are first shown preparing for a day like any other. Even the terrorists seem normal—pouring a child’s orange juice, stirring their cereal, kissing the older brother’s wife goodbye as they leave the house. Working from a broad canvas of events, director Berg (who also wrote the screenplay, with Matt Cook and Joshua Zetumer) introduces a variety of characters who either figure into the bombings or rub elbows with the terrorists, capturing every aspect of the tragedy, hour by hour, including wounded children, hysterical families of survivors holding their loved ones in their arms covered with blood, the ambulances and hospital workers, and even the terrorists’ subsequent shootout with police in Watertown, a nearby Boston suburb, that killed one cop and injured anther who died from his wounds a year later. As facts have since come to life in press coverage and public records, we are also treated to a re-enactment of the two terrorists’ hijacking of a terrified college student’s SUV and the boy’s brave escape. Tamerlan Tsarnaev, the older brother, was shot several times in the gunfight, run over by his panic-stricken kid brother Dzhokhar when he tried to flee, and later died in the hospital, while Dzhokhar became the focus of a manhunt that lasted one week and kept the entire city paralyzed with fear. The film delves into the internecine fighting between the FBI and the local investigators and follows the action all the way up to the capture of the younger terrorist, who was discovered in a Watertown neighbor’s back yard in a fishing boat. Sentenced to death, he is still in jail, awaiting an appeal.

A fine cast sifts through the facts: Kevin Bacon as the FBI agent in charge, J.K. Simmons as the Watertown cop who inadvertently found his community the center of the action. Although theirs is a thankless task that arouses so little sympathy that nobody is likely to remember them, Alex Wolff and Themo Melikidze are hugely convincing as the terrorists. The most interesting section of the movie centers on their attempts to escape, killing cops and taking hostages. The only tension builds when the cops close in and we watch them in the aftermath of the violence, trying to survive. Mark Wahlberg’s character is never satisfactorily developed, and the human elements involving the survivors seem rushed. (I could do without the hospital technician revving up the saw to amputate the leg of one victim who is bleeding to death.) I found the endless close-ups claustrophobic and irritating, and I’m sorry to say there’s an epilogue, introducing the actual survivors, many of whom are spirited enough to have re-entered the marathon, running on prosthetic limbs. This kind of ill-timed sentimentality blends with the real horror of a terrorist attack on American soil like vinegar and cupcakes. 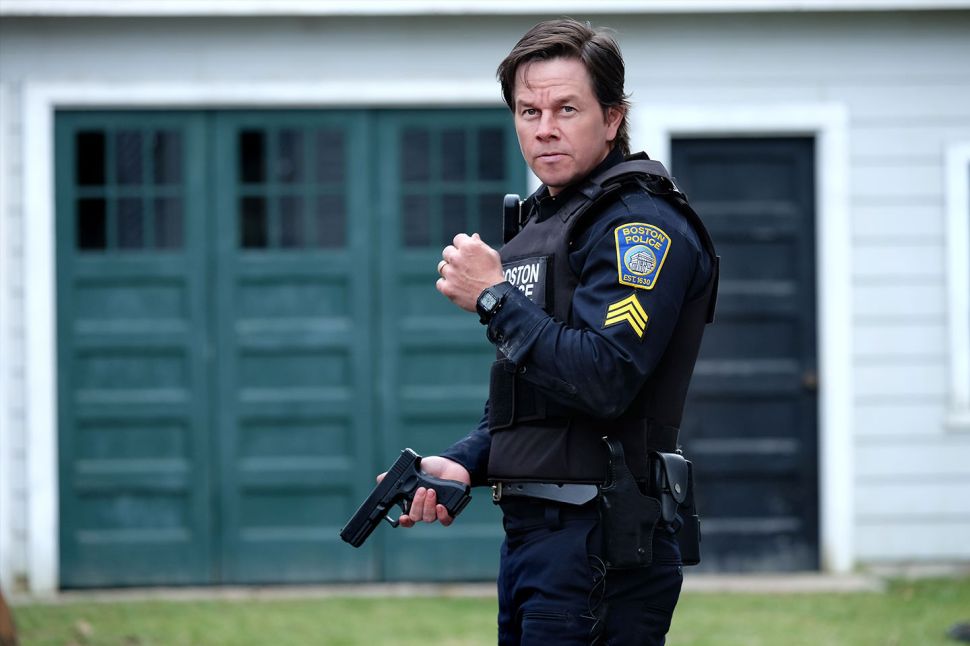