The Morton County Sheriff’s Department restored their Facebook page after it was taken down for several days after an insensitive post mocking the Standing Rock Sioux was published on Thanksgiving. The post was removed, but the department continued to spew the same childish arguments and propaganda that they have in their efforts to suppress protesters trying to stop the Dakota Access Pipeline.

On December 4, Morton County Sheriff’s Department held a press conference at which Sheriff Paul D. Laney made the claim, with no evidence, that self-proclaimed protectors planned on arming the veterans assisting them at Standing Rock in order to trigger their PTSD. “An element within the protest movement wants to exploit veterans with PTSD, arm them, try to trigger their PTSD and turn them aggressive,” he said. Laney’s laughable claim presupposes veterans are some sort of ticking-time-bomb zombies who can be turned into ruthless, aggressive soldiers upon being “triggered.”

On the Morton County Sheriff’s Department’s Facebook Page, the department has continued the disinformation campaign to discredit the veterans helping at Standing Rock. “Know the Truth,” with “truth” in bold letters is the title of various videos the department has published about the protests. But the department a relaxed relationship with truth.

The second video published by the sheriff’s department includes an officer claiming that though most of the protectors are peaceful, some are violent and “come after us.” The officer didn’t specify what he meant by that. There has been no video evidence, from media or the police, that shows violence from the protectors.

However, several videos in the past months have shown a militarized and hostile police force using tear gas (one protector was shot in the eye recently and is undergoing medical treatment to save her eye), spraying mace, shooting protesters and journalists with rubber bullets, arresting members of the press, using cannons on the protectors in subfreezing temperatures, and then lying about fires as an excuse, and throwing concussion grenades, one of which hit 21-year-old Williams College graduate Sofia Wilansky, who is now undergoing a series of surgeries to save her arm.

The fifth video published is an interview with a North Dakota veteran—the Morton County Sheriff’s Department propaganda pushback against the 2,000 veterans (including Rep. Tulsi Gabbard) who self-deployed to Standing Rock this past weekend. The video shows a veteran claiming that veterans from out of state are outsiders who don’t understand North Dakota.

In the seventh video of the series, an officer boasts about using a SWAT and Airboat team to steal an American flag from protectors. Video footage shows one of the officers using a boat to cross the river to steal the flag. The officer complains about veterans displaying the flag upside down as a signal for distress. At Standing Rock, I spoke with the first veteran to fly the flag upside down at the protest, First Class Petty Officer (Ret.) Kash Jackson. Jackson was joining the nationwide organization Veterans for Peace with the protectors at Standing Rock, because “I have a responsibility to my country and the people of this country to continue to uphold my oath until freedom is restored. That’s why I’m here.”

The veterans’ efforts to stand in solidarity with the Standing Rock Sioux paid off, as the U.S. Army Corps of Engineers announced on December 4 that the land easements would not be granted for the Dakota Access Pipeline, halting construction for the time being to conduct an environmental impact study. 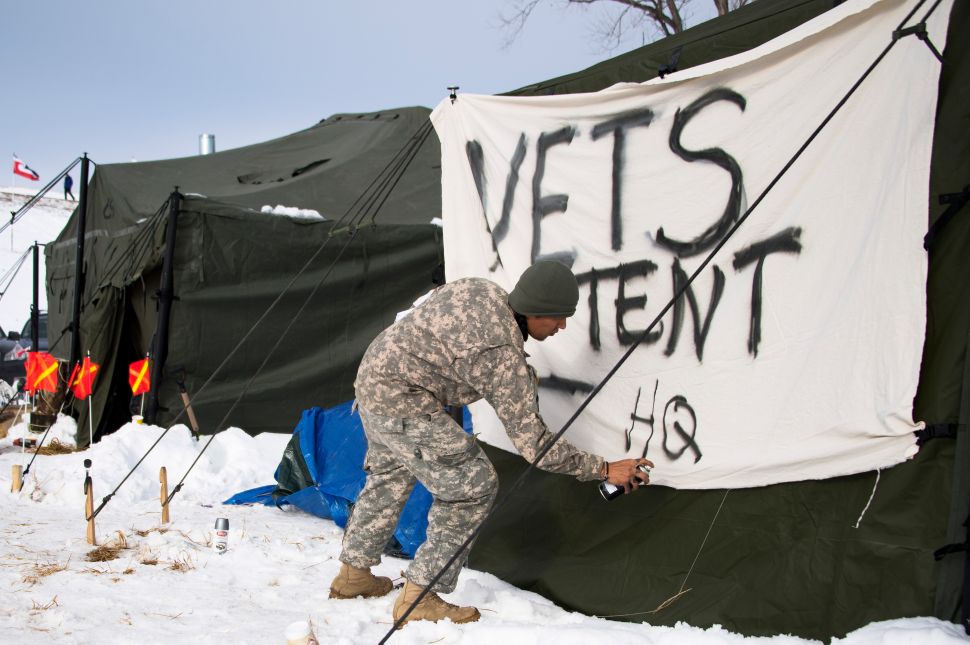