Elected officials and advocates are calling on Mayor Bill de Blasio and Gov. Andrew Cuomo to uphold their post-election promises to protect at-risk New Yorkers by committing to phase in a $2 billion, five-year plan to cover the tuition costs of enrollees at City University of New York schools.

The CUNY Rising Alliance, a coalition of community groups, faith leaders, labor unions and student organizations, released a white paper today—a companion to its Students’ Bill of Rights—that details what it describes as city and state disinvestment in CUNY and the university’s imperiled mission. From 2008 to 2015, per-student funding from the state dropped 17 percent at CUNY senior colleges and 5 percent at community colleges when adjusted for inflation, according to the white paper. And per-student city funding for the community colleges decreased by 13 percent over the same period, also when adjusted for inflation.

Public Advocate Letitia James, a graduate of CUNY’s Lehman College, noted that CUNY—which is largely state-controlled and funded—is an affordable educational option for students who come from low-income families.

“It is time that Albany and City Hall step up to provide greater support to our public higher education system and today all of us here today and countless others are calling upon New York City, City Hall and Albany to commit to a $2 billion plan over the next five years,” James said.

The average tuition at private institutions is $32,000, she said, noting that CUNY’s reported household income is on average less than $30,000 and that 38 percent reported earning less than $32,000 annually. James referred to these individuals as the “working poor of our city who yearn for an education, who yearn for success.”

She also said that more than 40 percent of CUNY undergraduates are foreign-born and that 44 percent of them are children of immigrants, saying that CUNY is an “invaluable dream” and resource for them to “achieve the American dream that all of us yearn for.”

“Many of these students who are the first in their families to go to college, students who might not have a needed documentation to attend another school, it’s really critically important that we open up their doors,” James continued.

Michael Arena, a CUNY spokesman, said that the CUNY Board of Trustees approved an operating budget request for fiscal year 2017-18 under which state funding will increase by $65 million and also includes an additional $93 million from the city for senior college operating support. They also approved a five-year, $6.8 million capital budget request for the same fiscal year for critical maintenance, upgrades and other campus building initiatives.

“The CUNY Board of Trustees has approved an operating budget request for FY2017-18 that seeks increased state and city investment in faculty hiring, new research, expanding college access and other initiatives necessary to provide our students with an affordable, high-quality education,” Arena said in an emailed statement.

The city said that it funded the entire increase of the Community College collective bargaining agreement negotiated by CUNY and the state. It also said that it continues to surpass its statutorily required support for CUNY community colleges, noting that by fiscal year 2019, it will be providing 40 percent of funding for those community colleges—over the requirement that they fund 30 percent.

“At the start of this administration, we made a commitment to increasing our support for CUNY’s community colleges by 50 percent,” said Freddi Goldstein, a spokeswoman for the mayor, in an emailed statement. “A few years in, we are close to fulfilling that commitment, budgeting to invest $142M by 2020 on new programming that will help increase graduation rates and make CUNY more accessible for all.”

The governor’s office insisted that it is also doing its part.

“The state provides nearly $2 billion to fund senior colleges every year and we will review the call for increased state funding in the context of the current budget,” Dani Lever, a spokeswoman for the governor, said in an emailed statement. “We can’t speak for the city.”

“We could afford to have free, fully funded public university education for all working people and we can unite across our differences and fight for that,” Lipton said. “And that will be a vision that will animate people, that will get people to the polls, that will be a contrast, a bold contrast to the policies of Donald Trump.”

Kevin Stump of Young Invincibles, a member organization of CUNY Rising, said that a college credential is increasingly necessary and that the “stakes are too high to continue this steep disinvestment.”

“We can no longer afford more tuition hikes, stagnant tuition assistance programs and inadequate funding levels from the state,” Stump said. “We’re here today to release a white paper and a student bill of rights that calls on our elected leaders in Albany and in City Council to fully fund CUNY.”

This story has been updated to include a comment from CUNY. 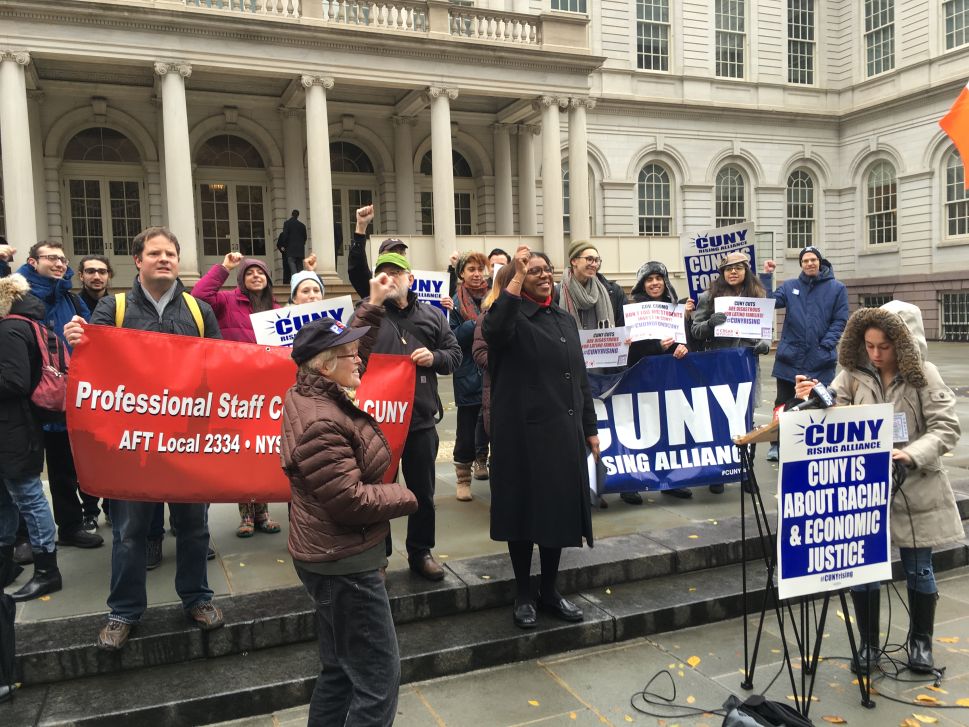