A quick note before we begin: I am not including “death” as a pop culture trend. Yes, it certainly seems that the Grim Reaper stood at the top of 2016 and swung that giant scythe from Game of Thrones every day or two just for fun, but the sad truth is that celebrities are not going to stop dying in 2017. Normal people are not going going to stop dying, either. Death is a blunt, often-tragic mystery that cannot be solved by a big, sparkly ball dropping over Carson Daly’s head in Times Square, as much as I wish it were so. To paraphrase a line from the musical Hamilton, death doesn’t discriminate between the Leias and the Snapes, so give hot takes, give hot takes, give hot takes.

With that said, there are plenty, plenty of pop culture tropes and tendencies we, as a society, actually have the power to leave behind in 2016. Here are the top ten:

Do you know the reason Stranger Things and Ash vs. Evil Dead are two of the best things on TV right now, while the X-Files reboot and Fuller House were the equivalent of someone filming a limp ramen noodle? Because the former utilized that warm, comforting feeling of “nostalgia” as a bedrock, a foundation of familiarity to build something wholly unique, while the latter was content with smacking you in the face with your high school yearbook and screaming “remember 1999??”

2016 was, as recently pointed out by THR‘s Daniel Fienberg, a year dominated by nostalgia, a weird phenomenon that resulted in some truly, truly terrible –and, worse, unnecessary– television. CBS trotted out MacGyver, FOX brought back both Lethal Weapon and The Exorcist, and we still have NBC’s Taken and Amazon’s The Departed to look forward to. To reiterate. there’s nothing wrong with playing with the idea of nostalgia. But the evidence shows networks are not interested in experimenting, but in bringing a property back to life simply because the name made a few people happy 10-25 years ago.

Quick question! Which 90-minute episode of The Walking Dead best utilized the extra time allowed by AMC? Sorry, trick question; The Walking Dead, in its entire seven season run, has never needed 90 minutes to tell the story it wants to tell.

The saga of the “extra-long TV episode” was born somewhere around the premiere of Noah Hawley’s Fargo adaptation, and started to sour almost immediately after Kurt Sutter went insane and decided every episode of Sons of Anarchy’s finale season needed to be a 3-hour epic. Things really came to a head this year; the two-hour premiere of HBO’s Vinyl is the worst movie Martin Scorsese has ever made, and I’m convinced it’s the reason both audiences and critics were turned off from the first note (Admittedly, 120 minutes of argghhhhcocaine is  a little much). But the worst offender, as I mentioned, is The Walking Dead, which, even as it sheds viewers, continues to plop overstuffed episodes into the middle of the season–not even premieres or finales–to make sure Negan can talk about his dick for his allotted 25 minutes, and every single person who lives in Alexandria gets a moment to look off into the distance with a mixture of anger and contemplation. Every, single, one.

I could easily just list superhero movies in general here but, buddy, Hollywood already has this things planned out long before all of us will be dead. Your children’s children’s children are going to line up at midnight to see Doctor Strange 47, which will still star Benedict Cumberbatch, because that man is an alien.

But–and this is something I could have written every year since, like, 1995 but I’m serious this time–Marvel, DC and whoevertheheck needs to take a step back from origin stories. I have seen Thomas and Martha Wayne die so many times that I now root for the mugger to just get it over with as quickly as possible. Netflix’s Luke Cage bloated out its runtime by taking a trip backward to the title characters’ past, and boy did that series sag like a hundred pound sack of pennies. DC’s Suicide Squad was not one, but seven separate origin stories, two of which you actually cared about, which left roughly 20 minutes of runtime for the required sky-beam to appear and the crocodile monster to become especially racially problematic.

And SPEAKING of Suicide Squad:

Listen, I’m not an actor, so I can’t weigh in on the pros and cons of method acting. If Daniel Day-Lewis wants to prepare for a Jaws remake by jumping into the shark tank at SeaWorld while covered in blood…fine, more power to him.

But, we in the entertainment journalism biz would benefit from not making these behind-the-scenes stories THE story. Leonardo DiCaprio finally won an Oscar in 2016, for The Revenant, bolstered in large part by a press tour that confirmed filming The Revenant was a shit-miserable experience. I’m pretty sure, at one point, DiCaprio had to eat an actual baby elk. Don’t quote me on that. The important thing here is, this narrative pushed aside the fact that The Revenant, while admittedly beautifully shot, was also a 3-hour shit-miserable experience to sit through.

Suicide Squad, once again, decided to up the ante in the form of Jared Leto, who prepared for his role as the Joker by being the worst co-worker on Earth. He sent Margot Robbie a rat, Viola Davis some condoms and the rest of the cast a dead pig. The process “changed” him “forever.” So it was with great, morbid fascination that audiences sat down to experience about ten minutes of Jared Leto on-screen, all of which was spent portraying “Heath Ledger’s Joker but if Heath Ledger’s Joker drank 4 Loko.”

Going forward, our policy on method acting should come from the Wizard of Oz: “Pay no attention to the man behind the curtain, because that guy is an asshole.”

5) The President of the United States vs. late-night sketch comedy

I’m an entertainment writer, so I allow smarter, more knowledgeable people than I analyze our next President. The only time I can offer my two cents on Donald Trump are A) When Vanity Fair claims his son-in-law stole my coffee machine, and B) When Donald Trump forcefully interjects himself into the pop culture world.

Case-in-point: Any time the President-elect of the United States, the man who will soon hold the nuclear codes and, essentially, the balance of the entire world in his hands, takes to Twitter because Alec Baldwin hurt his feelings. This isn’t really a problem “we” can solve, but a problem one person could solve by acting less like an embarrassing man-baby. Please, there are roughly, let me count, 4 trillion more pressing problems for the POTUS to focus on.

Not much here. I just would like to live in a world where CBS’ Kevin Can Wait does not exist. Moving right along…

When Amazon first announced Woody Allen would write and direct his inaugural TV series for the streaming network, the press release included this quote from Allen himself: “I don’t know how I got into this. I have no ideas and I’m not sure where to begin. My guess is that [Amazon Studios head] Roy Price will regret this.” This…turned out be accurate. The resulting six-episode series, Crisis in Six Scenes, is a project so half-baked that watching it gave me salmonella. It’s every negative aspect of Allen’s decades-long career, right down to his unnerving insistence that every story must involve a young woman falling for an older man (usually one played by Woody Allen), mingled with the presence of Miley Cyrus.

Woody Allen will probably continue to make films up to and including (possibly after) the day he dies, whether anyone asks him to or not. But no one, no one, should ask him to make a TV show again.

8) Rape as a plot device

There’s no way I could cover this topic as comprehensively as Maureen Ryan did over at Variety, but definitely take away the fact that studio heads and executive-producers are actively discouraging writers from using rape and sexual assault as plot devices. The most telling quote: “It’s become shorthand for backstory and drama.”

Which is true. There’s no denying rape and sexual assault are real, horrifying, traumatizing facts of life, and that art–and TV is art–should always, on some level, strive to paint realities as they are. But sexual violence became so prevalent on TV–it’s practically HBO’s calling card–that perhaps the most tragic experience a person can go through has been reduced to a plot-solving trick, filler for when something needs to be shocking.

We all remember the 86th Annual Oscars, in which the ceremony was nearly cancelled on account of blinding, white snow. Luckily, 2017’s ceremony looks to be, fingers crossed, leaving the #OscarsSoWhite controversy in the past. Moonlight, along with its Luke Cage-stealing star Mahershala Ali and director Barry Jenkins, is a heavy contender across the board, and the cast of the Denzel Washington-directed Fences put in such fierce, powerhouse work that the trailer alone blew me backward like I was sitting in front of a Maxell speaker.

[There is, of course, the bleakest timeline, in which La La Land wins every single category after Ryan Gosling berates voters into believing he invented the Oscars, much like he invented jazz music]

I know this is piece is a list, and that list has ten entries. Just…bear with me here.

In 2016, there were 455 scripted original series on television. In recent years, FX president John Landgraf has arrived at each Television Critics Association press tour bearing info-graphs, and spoke of this “television bubble” in tones so dire you would think Amazon Studios was melting the polar ice caps. And, truthfully, that is a lot of TV. But looking around, the section of society hit the hardest, the most grievously, seems to be TV critics, struggling bravely with the mighty task of creating a “Top 10 List” at the end of the year.

I can’t think of a single thing, today, on December 30 in the year of our Lord 2016, more outdated than the Top 10 list. We’ve adapted to the ever-changing monster that TV has become–more ways to watch, to consume, to talk about, to debate, to create television than ever, and still growing–but haven’t found a better way to say your favorite TV is not my favorite TV is not their favorite TV, etc. TV has become a conversation, where critics are less all-knowing judges of quality and taste and more like the most knowledgeable fan in the chat room, and yet we still think its helpful to write 5,000 identical lists letting people know Atlanta is pretty great. TV has become a massive conversation, and it seems like critics are only interested in talking to each other. 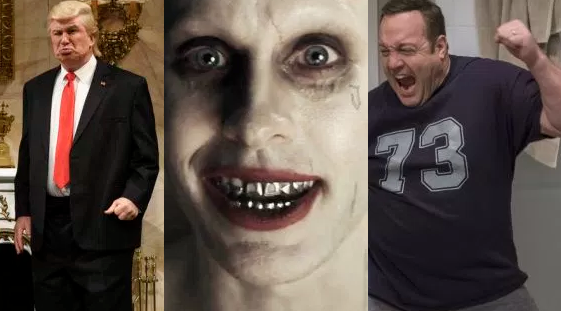