Pop Psych: Where we ask a real psychotherapist to delve into the mindsets of our favorite pop culture characters. This week: TBS’ Search Party is a study in codependent relationships.

One of the great charms of TBS’ new surprise hit Search Party is in how believable it makes its cast of loveable awful schmucks. The show presents an intimate look into the lives of four generally aimless, ennui-filled young adults in Brooklyn, as well as their similarly-lost cohort of acquaintances, buddies, exes, and bros. Each character seems intent on outdoing the last in style over substance, whether it be the wunderkind liar dressed in a — admittedly fetching — head to toe flower-print powersuit, or the whiter than white actress playing a Latina cop on TV barreling around Brooklyn in a well-cut fur vest. They’re absurd creations, but they never feel less than real.

Among them, though, the most believable by far is Drew Gardner (John Reynolds), the adorably lamp-necked, lanky, and smartly dressed foil/boyfriend to series protagonist Dory (Alia Shawkat). Drew manages the seemingly impossible task of being the only oddball in a world composed of the professionally unique. Early in the series we learn that he’s some kind of business major, working at the kind of company where you can get chewed out by your boss for being seen at a rival office. His clothes, while nice, are nothing special. They fit him well and look comfortable. He’s not much of a fabulist and he’s uninterested in adventure. What the fuck is he doing in Brooklyn?

Drew is initially played for laughs, the kind of walking, slow-burn panic attack who is always ready to absorb a tirade from his full-bore partner. In the first episode, we watch him get viciously yelled at by Dory in the middle of the street, only to see him waiting happily at home for her to return hours later. By the end of the season, though, he’s the only main character to undergo anything resembling a traditional character arc, learning to be brave and present and hold himself with dignity. He grows throughout the season, something no other character can claim to have done.

The fact that his growth ends up being so convincing in a show so obsessed with stagnation is as little a coincidence as his ending up living in a world so seemingly alien to his nature. Looking more closely at the tirade he’s subjected to in the first episode reveals a lot about how this guy works. He meets up with Dory outside of a job interview that she’s just bombed and tries desperately to appease her. She tells him to shut up and walk behind her, and while he agrees to do it he also goes in for a hug. She flips out and screams at him over and over to shut the fuck up, then storms off.

On the surface this looks like Dory losing her shit, but it’s not that simple. Throughout the season, Drew and Dory are clearly represented as having a well established pattern of her panicking, and him appeasing. On the Enneagram personality type test, he would probably be known as a Peacemaker – the kind of person who is most concerned with external calmness, often at the cost of internal honesty. In relationship, it’s very easy for two or more people to fall into these autopilot roles where instead of growing together through conflict you stagnate through complacency. This is what’s known as co-dependency.

In the case of their big blowout, Drew is actually failing in his attempts to relate to Dory because he is there to manage his own experience, which he does by negating hers. You’d have to be an idiot not to see that Dory is walking out of her job interview shaken. She’s experiencing a loss of confidence on the existential level, and he hits her with the kinds of platitudes you’d soothe a middleschooler with, then suggests ice cream. What’s clear is that he’s not present with her, he’s not paying attention, and all he really wants is to escape her feelings. He offers to buy Dory Moose Tracks, but it’s really him who wants that fudgy vanilla confection.

Contrast this with the Drew we meet in the last few episodes of the season, who’s gone from a guy trying desperately to shut down Dory’s investigation to going on one of his own. Drew starts to piece together that Dory’s been lying to him and does something real clever. He notes his mistrust of her story but doesn’t push her on it at first, because he knows he doesn’t have any way to confirm his suspicions and, more importantly, that he doesn’t want an answer. But instead of dropping this feeling, he just moves it to the back of his mind until a good opportunity comes up.

When Drew does get a second chance to test his theory, things have changed for him. He pushes hard on the way to Montreal, and gets Elliott (John Early) to slip up in his efforts to corroborate Dory’s terrible alibi. This may sound like a small thing, but for a guy who can barely get through a sentence without yawning it’s a serious change of pace. He pulls over and goes off on Dory, dumping her hard and buying a bus ticket home.

And as if this wasn’t enough, before he leaves Montreal he not only beats a man to death while protecting Dory, he is able to be present to her emotions when he consoles her. She goes into a full crying panic and crawls into his lap, and he doesn’t offer her anything besides himself – he holds her, he whispers in her ear, and at no point tries to tell her it’s okay. He is able to be with her in the full realization that reality is kind of a piece of shit sometimes. Ice cream is a joke; the only cure for anguish is anguish.

What changed? To put it simply, resolving codependency means abandoning any hope of changing or even managing your partner and putting that energy and attention into yourself. In Drew’s case, we see this start to happen when his hot wet mess of a neighbor tries to seduce him. He’s clearly tempted – who wouldn’t be? – but he holds firm and kicks her out. Later, he tells Dory, and she’s so wrapped up in her own shit that she barely notices.

Now I don’t know about you, but if I told my partner I’d just gotten a personal lap dance from the neighbor I’d expect… something to come of that. And in a codependent relationship, you need to. You need that blowup to affirm that the relationship still exists, that your partner still cares about you. When Dory just takes Drew’s admission in stride and promptly gets back to her own problems, it sends a signal about their relationship: the contract is broken. Dory will no longer freak out on Drew. And if that’s the case, then why even bother?

This exchange forces Drew to focus on himself for a while; if Dory won’t, someone else has to. And what he discovers is what he tells her during their big fight in Montreal, that he’s known for a long time they weren’t right for each other but has been too scared to say so. This is the heart of codependency: by getting in constant little fights, a couple can simulate the intensity of true intimacy without having to go through the pain of honesty. It creates comfort that masquerades as relationship, but relationship, being a compromise, is painful. Drew has finally had a chance to feel his pain and be honest with himself and, like it or not, can’t go back to the way things were.

His response is perfect: he doesn’t expect anything from Dory, not even that she keep up with him. Instead he changes himself, and is able to react to her differently. This is integrity, and it frees him up to be a real asskicker. Believe it or not, this is what makes him so believable. When people drop their comfort habits, they quickly find that they’re well prepared for exactly what they were so afraid of finding outside of their nest. 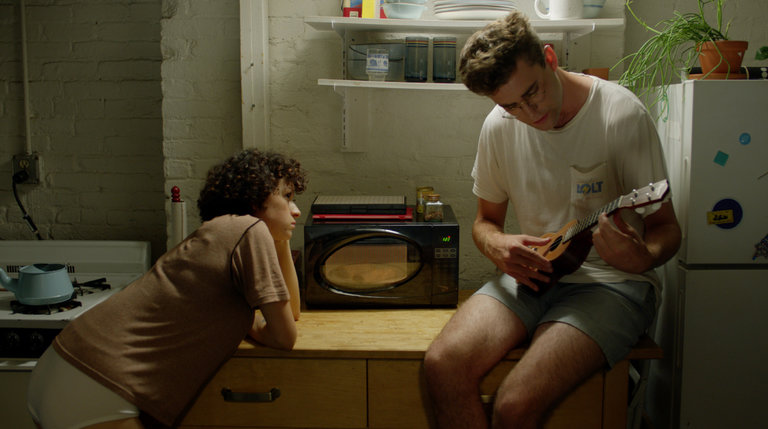