Trying to decide just what kind of New Year’s fitness resolution you want to make? This post could help, but be careful: this is the kind of material that—in the hands of the wrong person—could lead someone down a path of obsession. On the bright side, it’s a path that could deter heart disease.

Pull-ups are one of the most demanding exercises, but they are also very simple. Jump up, grab a bar and pull. If your chin gets over the bar, you did it.

Yet, there is a vast world of videos about pull-ups on YouTube. In fact, since the best pull-ups videos get millions of views, this genre has become a cottage industry. Maybe it’s because pull-ups, in one motion, indicate so much about a person’s overall fitness.  You’ll meet people who can zip through a marathon or dead lift impressive amounts of weight but who can’t do multiple pull-ups. On the other hand, a person who can do several pull-ups will likely be able to both run a few miles and bench a respectable amount.

Pull-ups demonstrate total body fitness. Case in point: the Marines’ physical fitness test only has three challenges on it, running, crunches and pull-ups.

So here’s a guide to the vast world of obsessing about this simple exercise on the world’s biggest video sharing site. If shirtless dudes who are really psyched about working out isn’t your thing, though, stop here. You’ve been warned.

In my extensive viewing of pull-ups videos online, everything seems to come back to the Bar Brothers, Dusan Djolevic and Lazar Novovic. The channel only has 18 videos, but it’s hard to overstate their influence on calisthenic exercise videos about pull-ups. The channel’s oldest video went up in August 2011, and it has over 20 million views.

The following is effectively a Bar Brothers manifesto:

Here’s a shorter video of the bros visiting Manhattan that captures the street calisthenics spirit (my favorite part is the guy smashing his elbow into other guys’ abs as they lift themselves):

This brotherhood is a YouTube cult, one that’s open to anyone but that very few can actually join. To call yourself a “Bar Brother,” a person just needs to document completing the following: seven muscle-ups, 25 dips, 10 wide pull-ups, 25 push-ups, 10 leg lifts and seven more muscle-ups in five minutes.

Here’s a video of YouTuber Isaac Way completing the requirements in just under five minutes:

According to Daniel Vadnal, founder of Body By Rings, there are 35 good variations of the basic pull-up. He demonstrates all of them in a video that gets progressively crazier as it goes, with Mr. Vadnal executing each technique with complete chill:

Did you watch long enough to see the typewriter pull-up? Because that one seems so impossible it’s like a special effect.

Vadnal has lots of videos where he relates different exercises back to human anatomy in clear and intelligent ways. The fact that the man has turned himself into an almost perfectly tuned machine testifies to his expertise. He also delivers his overall message with perhaps the lowest bro dosage of anyone on this list. Like the Bar Brothers, he has a fitness program to sell you; however, none of these guys seem to earn enough money in this racket to buy a shirt that has sleeves.

Guys aren’t the only ones who do pull-ups, though they do dominate this genre. Marianne Kane made a popular guide that’s directed at people who can’t do any at all and may not even be able to hang from the bar yet:

For something more advanced, Sarah Grace offers her own weird pull-up variations, such as using ropes or mountain climbing gear:

Pull-ups are completed with hands facing away from the body. Chin-ups face hands inward. It’s a small but important distinction, because each recruits different muscles. That said, one is not “better” than the other. Both are impressive, but there’s a few instances in these videos where someone says they are doing pull-ups, but it’s really chin-ups. Each take a lot of strength, but we’re just pointing it out for accuracy’s sake.

For example, Aussie Jess had excellent form as she attempts what she calls 15 pull-ups, though they are in fact definitely chin-ups. We’ll forgive her because she drops all the way down at the end of each repetition, not even leaving herself a tiny cheat bend in her arm at the bottom, like most people do:

We’d be remiss to ignore rule 34 of the internet in this round-up (in a safe for work way). Naturally, there are loads of videos showing very attractive women doing pull-ups mainly as an excuse just to make a video of very attractive women. This one from Spartan Girls, a fitspo channel, represents the sub-genre well:

For cuteness, here’s a five year-old girl named Madison Long’s world record-setting video from a gym in Wisconsin, complete with an adorable finale after she’s set her record.

Speaking of world records, the internet loves them. Ron Cooper has achieved many, attributing his success to working out consistently since he was a young man, though he only does pull-ups twice a week (he likes to use his kids as weight during his workouts).

We’ll touch on another world record documented on the same channel that the internet does not love as much, below.

Mark Wahlberg raised $25,000 for breast cancer research doing what honestly looks like zero complete pull-ups on The Ellen Show, but the audience (and People) counted 22.

Does it look like his chin ever really goes over the bar? By the end, it definitely isn’t, but the actor did already work out that day, so…

For pull-up enthusiasts, Wahlberg is c-list. Frank Medrano is a superstar:

Tons of people have programs about how to advance with pull-ups. Most of it comes down to this: do pull-ups. Still, there are tricks and endless opinions about how to move ahead faster.

SuperFreshBandit made this video for the athlete who has stopped progressing:

Once down this road, one realizes that the pull-up is really more complicated than it seems. Before a person can pull their head over the bar, she needs a strong enough grip to hold onto it. Then there’s the question of both kipping (using body momentum) and assisted pull-ups, which are both cheats to help get over the bar while building up to a clean pull-up. Does cheating help or hurt one’s progress toward true mastery? That’s a debate that rages on.

SEAL Grinder PT made a video about improving grip strength for people who can’t do a pull-up or even hang from the bar yet:

Also, he has a proper shirt. The man is a rebel. He’s like the Sid Vicious of pull-ups videos, basically.

Jeff Cavaliere of Athlean-X argues that weak brachioradialis muscles (part of the upper part of the forearm) might prevent some people from effective execution of the exercise, and he suggests ways to build them up:

Got a backyard? Corey Hall shows how to build an outdoor pull-up bar so you can workout at home:

He should do a follow-up video for other calisthenic YouTubers about how to find a shirt. Finding shirts is clearly a pain point in this community.

So you’re already a beast at the gym. You can do so many pull-ups that sometimes people don’t even notice how badly you’re rocking everyone else because they’d have to stare too long and count all the pull-ups you’re doing. Can you show everyone your physical superiority in just one motion?

It turns out that a person doesn’t have to stop climbing at their chin. When an athlete pulls their upper body up over the bar so that their arms completely extend above it, that’s a muscle-up (this reporter had not known that this impossible looking move existed before entering this corner of YouTube).

Again, Corey Hall has tips (wait for the part with the bike):

A one-arm muscle-up (on a springy bar, but still):

For the purist, here’s a super slow muscle-up (all power, no momentum) from the team at Barstarzz:

Executing that move is the fitness equivalent of painting the Mona Lisa. We’re not worthy.

One of the smaller pull-up subgenres covers tough old dudes. Not many of the grey beards stunning the gym rats have their own YouTube channels, but that doesn’t stop dudes with video cameras from seeking them out.

This 60 year-old man does more push-ups and pull-ups down at his Lower East Side park every day than you even want to think about:

Here’s an 83 year-old doing a load of chin-ups (despite what the video title says):

For a long time, when I logged onto YouTube, I was assailed by ads for videos from Mike Chang promising to show me shortcuts to six pack abs and the maximum bro lifestyle. He has since retired, but he secured a world record with pull-ups while carrying 40 pounds of weight, as can be seen on the Guiness Book of World Records’ official channel.

In the comments, many viewers counted zero complete pull-ups because it never appears that Chang’s chin goes over the bar (not even once), but Guinness blames that on the camera angle. Suspiciously, the sequence was shot with more than one camera, but the side view is placed in such a way that viewers can’t really see Chang’s head from that perspective either.

Infinite Elgintensity ripped into the record at length:

Your mileage may vary, but when someone really completes a pull-up in the many similar videos in this post, it isn’t ambiguous.

Pull-ups aren’t just a hobby. The move has become a hot topic in the armed forces as the United States military works to open opportunities to women, as CNN reports:

There are a lot more videos about pull-ups out there to help you get ripped (or to fantasize about it)(or to fantasize about ripped people who do pull-ups—we don’t judge). Hopefully, for those that decide to dig further, one of these videos leads to another video and then another until something clicks.

After all, everyone in this community has the same goal: living life without shirts. 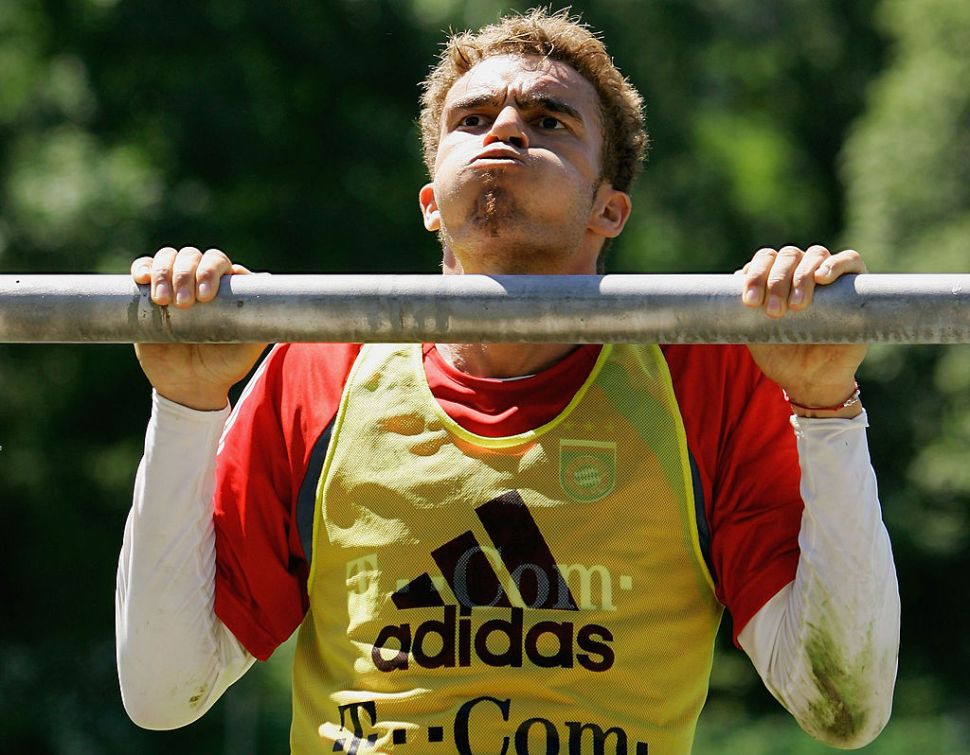