Kyle Richards has brought her daughter Sophia, 16, with her on a trip to New York. She takes her to the High Line, where Sophia points at the Empire State Building and asks, “What’s that?” Better question: Why is this kid filming a reality show and not at school?

Last year, Lisa Rinna was the Vanderpet who accompanied Lisa Vanderpump to Ohio to pick out a miniature horse for Ken’s birthday gift. This year, Rinna is in New York with her daughters and LVP has Dorit Kemsley on a leash. She picks her up, hoping for a glimpse of Boy George, who is once again “on tour” and not at the home he supposedly shares with Dorit and her husband PK. The ladies go to a watch store and pick out a $25,000 watch with a cheap rubber strap for Ken’s present.

Kyle is in Manhattan, riding in a pink Jeep with an ad for her Hamptons store on the back. As Anna Wintour always says, nothing suggests refined elegance like driving a sandwich board. Kyle is opening a shop on the cheaper end of the Upper East Side, away from Central Park, on 2nd Avenue. Her space is a total gut renovation, and she has only two months to open it. Rinna shows up to talk about her issues with LVP. Kyle says in her face-to-camera interview that LVP has decided to put her troubles with Rinna “in a box, put aside. And [it] will be opened up when needed, if you know what I mean.” Yes, we do.

Dorit’s beautiful four-month-old daughter, Phoenix, has to wear a huge white plastic helmet to realign her skull. Dorit is clearly prickly about her baby’s less than perfect appearance, and lets one of her army of nannies hold her daughter while she admits that she cannot wait for the helmet to come off. Until then, Phoenix is a flawed accessory, so she doesn’t get to come to the park with mummy and her brother. (Neither does Boy George, who is still “on tour” and not at his “home” with the Kemsleys.)

The housekeeper is packing toys for the trip to the park, and Dorit also needs her to help put the car seat in the car. “Step on it! Put some fuel in the tank, will you?” she says in that faux-jokey manner most nasty, horrible bosses use with junior staff. Of her children’s multiple nannies, Dorit says: “They’re an extension of me, in every possible way.” What an insult to these women, who are clearly far more capable with and interested in the Kemsley children than their own mother is.

Another nanny drives up with Dorit’s four-year-old son Jagger, whom she has taken to speech therapy while Dorit was busy putting on another layer of makeup. At two, Jagger was embarrassing Dorit by not talking much, so his nannies started taking him to speech therapy. Dorit states point-blank that she is not pleased with the slow pace of his progress.

In a development that would shock nobody who has spent any time at all with small children, Jagger doesn’t particularly want to be moved from one car seat to another for more driving. Park trip cancelled, Dorit is relieved her five minutes of almost mothering for the week are over.

In New York, Rinna’s daughter Delilah has a meeting with a casting exec from industry bible CR Fashion Book. She’s brought along her modeling manager, her agent, and her mom. Rinna admits that she herself was a “reject model” – so why is she here? Oh, to humiliate her daughter. Rinna regales the French casting exec with a super-relevant, charming tale of her two vaginal deliveries and describes the size and shape of her “birthing canal” [sic]. After letting the cameras film her ass waxing session last season, I fear Rinna’s next attention-getting move will involve an interactive slideshow of her most recent bowel movements.

Lisa and Ken are looking for an apartment for their son Max. They’re giving him the down payment, but he’ll have to pay the mortgage. Max is a dishwasher at Sur, if LVP is to be believed, so it seems unlikely he earns enough to pay a mortgage. She also claims Max didn’t have electricity for three months and she refused to pay the bill because she wants him to struggle. (Today I learned that “struggle” means mommy and daddy giving you a down payment for an apartment in LA and totally furnishing it for you.) Lisa says, “I want my kids to have a luxurious life now, and I’m going to do it for them.” Because that has worked out so well for the children of other wealthy people. Still, at least LVP can pick her kids out of a lineup, which is more than one can say for her friend Dorit.

Kyle and Sophia meet Rinna and her daughters at a super tourist-y looking Times Square bar. Delilah claims she’s on a dating app that’s only for “really special” people. Rinna freaks out about Delilah using dating apps, and Delilah says her parents “just don’t understand the new age.” Amelia, her 15-year-old sister, retorts, “Maybe it’s because you’re 18 and talking about getting 35-year-old men.” It’s hard not to love Amelia.

Eileen is understandably upset to go to her late mother’s house and claim her last possessions. Having to cope with the death of seven loved ones – including three siblings, her mother, and her father-in-law – in recent years, Eileen feels in over her head. She tells her therapist that it’s “almost embarrassing to have lost so many people.” Eileen’s epiphany: She feels ashamed for making people feel uncomfortable. Her therapist says, “Stop making things okay for everybody else and be you.” This doesn’t bode well for LVP.

Kyle goes from her teensy, tiny closet to a bar, so she can pre-game with some of the other ladies for another stupid ‘white party.’ She quickly realizes her white underwear are showing through her jumpsuit. As soon as Dorit and PK arrive, Kyle appeals to them for advice. Dorit tells her to go commando.

When Erika arrives, PK is drinking vodka Red Bulls and leering at her like she’s a plate of steaming hot fish and chips. Erika is preparing to meet with The Young and the Restless’s production team to discuss the role Eileen gifted her for her birthday. Lisa interjects: “Eileen asked me to do it!” Kyle laughs and says, “You asked her!” The video playback from a year ago shows LVP begging Eileen for a role.

PK asks Lisa about her past acting career, and makes a joke about her having starred in silent films. Erika gently calls him out for being rude. Lisa leaps to his defense, saying, “It’s English!” Erika deadpans to Kyle: “You know what you and I should do? Let’s get fake British accents and start insulting people.” Direct. Hit. PK says, “We don’t call it insulting, we call it self-deprecation.” Somebody buy this dude a dictionary. Erika says she prefers for people be nice to one another. Lisa complains that’s “too American.” “Well,” Erika says, “we’re in America.” Dorit haughtily declares that “Americans need to calm down.” Erika can’t take it anymore. “You’re an American! What are you talking about? You were born in Connecticut!”

Erika has a black napkin covering her crotch, thighs and knees as she sits delicately next to Lisa. LVP asks if she has underwear Kyle can borrow, knowing full well Erika would not be wearing underwear with that outfit. “I have on a Mugler dress. Why would I break up a beautiful dress with an ugly line – with a panty line?” Erika asks. Here’s one reason: to prevent PK staring at you like a total creep this whole time.

The next morning, Dorit is pretending to feed her son a meal. PK comes into the kitchen and comments on the previous night. “The scenery was good,” he says, obviously referring to the lecherous way he stared at Erika. Everyone is pretending they saw her genitals when she was sitting with her legs closed and a huge linen napkin covering her from the waist down. PK says it was making him “hot” and distracted. Dorit asks if he was aroused. “I didn’t mind the view,” PK admits. So. Gross.

Because she’s totally secure in her marriage, Dorit plans to make a “joke” about this incident with Erika. It’s a good thing her children have never recognized Dorit as their mother. Because when she shows up unarmed to a battle of wits with Erika, she will be lucky to get out alive. 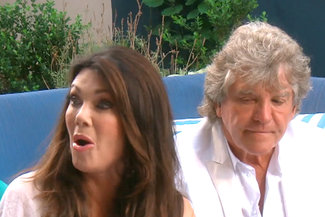