The silent, months-long contempt expressed by the Russian political class toward the departing White House Administration was suddenly interrupted on Thursday by U.S. President Barack Obama’s announcement of a new set of anti-Russian sanctions.

In Russian media, in the political class and among government officials, the reaction in Moscow was fierce, vocal and pugnacious.

Obama’s decision to expel Russian diplomats—in addition to sanctioning a number of Russian companies and individuals—is nothing but evidence of the agony of the outgoing administration, Konstantin Kosachev, head of the International Committee of the Russian Upper House of Parliament, said to RIA Novosti. “The leaving administration has no reason and no political or moral right for such drastic and disruptive steps with regards to bilateral relations with Russia. Forgive me for being harsh, but I just cannot find other words: this is the agony of not the lame ducks, but of political corpses,” the Russian Senator said. “[President Obama] put at stake the U.S.’s reputation as an adequate state that ensures policy continuity in the process of change of power.”

“This is really a disturbing news,” responded Kosachev’s deputy, Alexei Chepa. According to the politician, Obama’s goal was simply to create new problems for President-elect Donald Trump—more obstacles in building better relations with Russia. “It creates additional difficulties for the [Trump] administration to overcome later.”

Chepa’s colleague from the International Committee of Parliament, Vladimir Dzhabarov, believes Obama was attempting to annoy Russia “out of impotence.” “Obama proved himself to be an arbitrary person who happened to lead the United States,” he said.

Russian think-tanks and academia agree. “The goal of the 44th U.S. president is to complicate things for the 45th one,” Gevorg Mirzayan, a professor at Financial University under the Government of the Russian Federation, told Komsomolskaya Pravda newspaper.

“This is very unusual,” Mirzayan continued, “because usually when one’s political opponents from another party arrive into the White House, the power is transferred with dignity. But instead of this, the current [U.S.] most important person, like a ‘mad printer,’ is creating laws and decrees with the goal to freeze the ‘foreign affairs revolution’ of the new administration. I believe that the personal antipathies of Obama, who believes ‘Putin beat him on all fronts—including the elections’ play a role here.”

“Obama is setting as many traps as possible for Mr. Trump on [the] international field,” echoed Alexander Domrin, a professor at the Russian High School of Economics.

The idea that there was something personal about America’s new rounds of sanctions is widely shared. Andrei Krutskikh, ambassador-at-large for the Russian Federation, declared all accusations against Russia groundless—adding that the only reason for anti-Russian sanctions was Barack Obama’s personal hatred for Vladimir Putin.

Others believe that Obama, like a bad tenant, is trying to ruin everything in the apartment he no longer rents.

“The outgoing U.S. Administration, in her last days, still hopes to ruin even more the relations with Russia, forgetting, probably, that these relations had already been brought down to the ground,” Maria Zakharova, an official representative of the Russian Ministry for Foreign Affairs said to Lifenews. She continued:

“They are once again trying to frighten us with the widening of anti-Russian sanctions, with measures of ‘diplomatic nature,’ and even with the sabotage of our computer systems…Frankly, we are sick and tired of the outright lies about ‘Russian hackers’ that continue to pour down in the United States from the very top. The Obama Administration launched this disinformation half a year ago in an attempt to support the position of their desired candidate for the November Presidential elections. Having not achieved their desired outcome, now they are looking for the justification of their failure and, doubling their efforts, they are taking revenge on the Russian-American relations.

“Sooner or later, the truth about this campaign will eventually come out, and it is happening already. On December 8, American media reported that the Secretary of State of Georgia, Brian Kemp, made it known that local officials tracked the hack that attacked his electronic vote-counting system soon after the elections. The traces led to a computer address within the Department of Homeland Security of the United States. What else we can talk about here? About the fact that this [revelation] was covered with the flood of the new accusations that had not a single evidence?

“It must be made crystal clear for people [who are] in the White House now that if Washington will implement new hostile steps then it will get the [appropriate] answer [from Russia]. It concerns all the acts against Russian diplomatic representatives in the US and will immediately bounce against the American diplomats in Russia. [The] Obama administration, probably, does not care what will happen with bilateral relations with Russia, but it is unlikely that history will forgive the attitude based on the principle ‘let there be even flood after we are gone.’

“We have been saying this all along,” Zakharova posted later in the day on Facebook, “people [who] inhabited the White House for 8 years are not Administration but a bunch of foreign policy losers, angry and primitive. Today, Obama admitted this officially. The most amazing thing is that, having not been able to write down into the history of the Presidency any achievements on international arena, the Nobel Prize Laureate managed to put a fat blob instead of elegant dot…Today, America, American people were humiliated by their own President. Not by international terrorists or foreign enemy’s troops. It’s a curtain time. [The] ugly show is over. The whole world, from stalls to the gallery, had been watching the crashing blow to the prestige of America and to its leadership, caused by Barak Obama and his illiterate foreign policy team that opened to the world her biggest secret—exclusiveness was a mask for helplessness. And no enemy of the United States could have done worse damage.”

Russian media has taken on the issue, gloves off, with personal attacks and open hatred toward President Obama. Their words are no longer carefully chosen or calibrated.

“Obama is playing dangerous games. He started to crash wildly everything around him,” top political commentator and pro-Kremlin propagandist Dmitry Kiselyov raved on his TV show. Obama set the foundation for another colored revolution—this time in America. “Now, with all of his might, Obama tries to spoil everything everywhere for the President-elect Trump. And with every day, his behavior gets worse and worse. It seems that on the eve of the inauguration—January, 20—he will have nothing else left to do for himself but to break all the windows in the White House and to leave behind a pile [of shit] on the steps.” 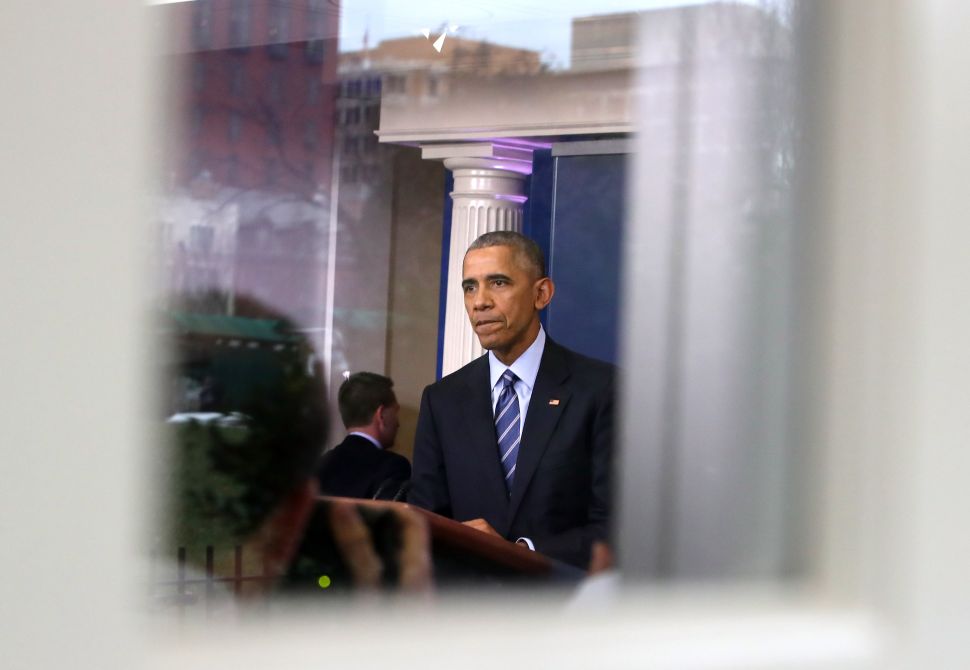