Yesterday, following months of anticipation, the White House announced sanctions against Russia’s intelligence services for their interference in our 2016 election plus their rough treatment of America’s spies in the field. Coming on the heels of years of Russian hardball in the SpyWar, and in the very last month of Barack Obama’s presidency, this is more a gesture than a substantive policy change.

What President Obama announced will cause Moscow some pain. Two intelligence agencies are explicitly sanctioned: the Federal Security Service (FSB) and the Main Intelligence Directorate of the General Staff (GRU), both of which engaged in what the media calls “hacking” which is properly termed signals intelligence or SIGINT. Adding GRU and the FSB to the sanctions list won’t mean much practically speaking, but four GRU officers have been cited by name, as have three GRU front companies which were engaged in clandestine SIGINT operations against the Democrats.

More substantively, the State Department is shutting down two Russian “diplomatic” compounds in Maryland and New York which have been used by GRU, FSB and the Russian Foreign Intelligence Service (SVR) for years as spy bases. Their lavish retreat venue on the Eastern Shore of Maryland had been used by the Russians for decades to covertly collect SIGINT on American installations in the Washington area, particularly the National Security Agency, located in central Maryland.

What’s getting the most attention is how the White House has ordered Foggy Bottom to kick 35 Russian spies out of the country without delay. Around the world, spies pose as diplomats, with accreditation from the host government. Since espionage is illegal pretty much everywhere, this is a polite fiction that allows spies to do their job, quietly, with a modicum of diplomatic protection. They only get that status revoked—it’s called being declared persona non grata, PNG for short, among spies—if they get caught flagrantly violating the host country’s laws. Or, as in this case, if the host country wants to send a strong message.

Mass expulsions were used on occasion during the Cold War, by all sides. Back in 1971, Britain expelled 90 Soviet spies, the lion’s share of the Kremlin’s covert operatives in the country, in reaction to the defection of a KGB officer who told London that Moscow had standing plans to conduct terrorism in the United Kingdom. They did it again in 1985, expelling 25 Soviet “diplomats” from Britain, and Moscow retaliated in kind, declaring 25 British “diplomats” PNG in return, in typical SpyWar fashion.

Obama’s mass spy expulsion removes any doubt about the existence of Cold War 2.0. Thirty-five intelligence officers represent about one-third of the Russian spies which U.S. counterintelligence knows to be operating in our country. Both sides in this spy-game have a good idea of who the real diplomats are and who’s really an undercover spook. That is a setback for Moscow, since it will take time to rebuild damaged espionage networks, but its real-world impact will not be especially severe, since the Kremlin surely knew something like this was coming, thus giving Russian intelligence agencies time to develop back-up plans for this contingency.

Moreover, in an interesting twist, Russian President Vladimir Putin today announced that he will not be expelling 35 American diplomats in any kind of tit-for-tat, as his foreign ministry supposedly requested, adding acidly, “While keeping the right for retaliatory measures, we will not descend to the level of ‘kitchen’, irresponsible diplomacy.” He then invited American diplomats and their families to a Christmas party at the Kremlin, in a classic wry Putinesque touch.

Obama seemingly never got the memo on how the Kremlin does business.

It’s clear that Moscow expects that the new Trump administration will take a far more lenient line with the Kremlin than President Obama is, suddenly, in his last days in the Oval Office. Just this week, President-elect Donald Trump yet again brushed off any notion that the Russians interfered in the election that won him the White House, adding that the country needs to “move on” from what he considers to be a stale issue. This led Sen. Lindsey Graham, a member of Trump’s own party, to note that 99 Senators agree with Obama and the Intelligence Community on the issue of Russian spy-games in 2016.

There’s the rub for Trump. While he and his surrogates continue to portray Russian espionage and covert action as non-issues, even as “fake news” conjured up by an alleged left-wing cabal of American spies, the espionage reality is well known in Washington, and a great many Republicans in Congress agree, at least in outline.

Here, President Obama’s release of an unclassified 13-page analysis of how Russian SIGINT was employed against Democrats, then weaponized against Hillary Clinton, thoroughly undermines protests that the Kremlin has clean hands here. The facts are available to anyone who wants to know them. As I’ve explained previously, the issue isn’t “hacking”—every decent spy agency does that in the 21st century—but, rather, how the Kremlin used purloined propaganda for political effect in the United States.

Between now and January 20, the president-elect has a choice to make: to go along with his predecessor’s 11th-hour response to Putin’s interference in our democracy or not? If Trump backs off these rather tame sanctions, he will put himself in direct conflict with many prominent members of his own party, not to mention he will look like he cares more about the Kremlin than our country and its interests. That’s not a position that any rational just-inaugurated president seeks to be in.

To say nothing of the fact that kow-towing to Moscow after Obama finally worked up the courage to push back, however belatedly, in the SpyWar, will earn Trump the everlasting enmity of our spy services. Since the president-elect has all but declared war on the Intelligence Community already, he may double-down, as he so often does. That mistake would have lasting consequences for American national security and Trump’s brand-new presidency.

It’s good that Obama, after years of acquiescing in Putin’s toxic clandestine machinations against the West, has finally decided to get in the game. However, these actions should have been undertaken years earlier, when they might have mattered. Dozens of Russian spies should have been PNG’d back in 2013, after Edward Snowden defected to Moscow. That’s how the SpyWar works, but Obama seemingly never got the memo on how the Kremlin does business. Letting Putin run riot against America and the West with his spy agencies has only gotten Obama more aggressive espionage, for which his designated successor paid the price.

Moreover, the White House’s limited response is unlikely to inspire much fear in Moscow, which continues to mock Obama as a weakling. If the administration wanted to send an unambiguous message, they would have targeted not just GRU and the FSB, but their obvious fronts like Wikileaks, which did so much damage to Democrats this year. Until Washington pushes back hard on Putin and his global espionage apparatus, Russia will keep winning in the SpyWar. Now the issue passes to Donald Trump, while the world watches. 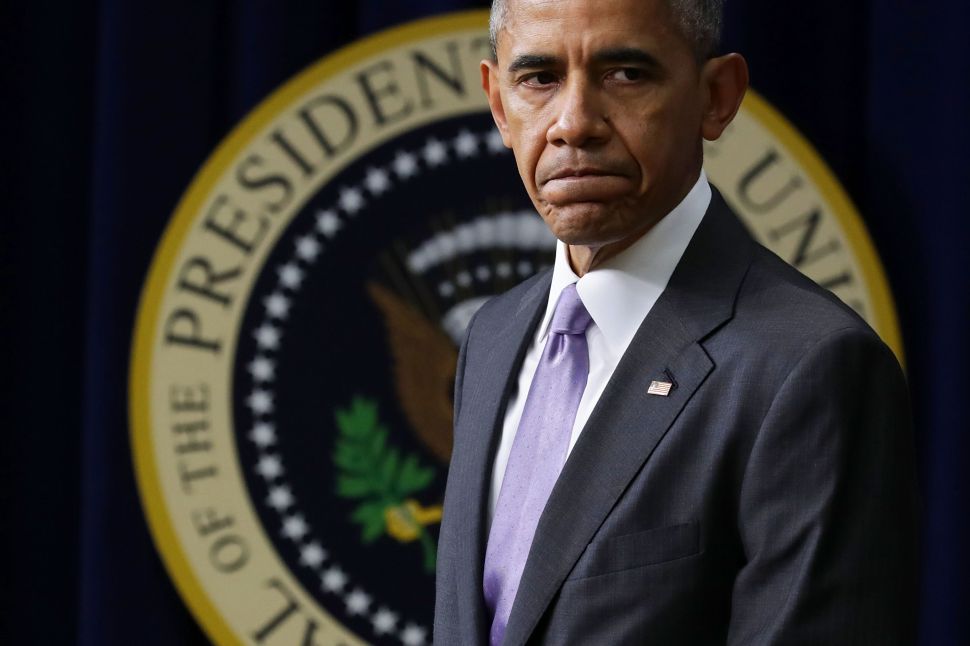