I already analyzed everything we already know about Season 4 of Sherlock but now we have a new teaser trailer. Get your magnifying glass and cheekbones out, because it’s time to play Cumberbatch.

At first glance, the teaser shows us John and Sherlock sitting in their living room, which has been flooded by what looks like about a foot of . At first it looked like that red coloring on the surface was blood, but thanks to my detective skills I realized that it’s just the reflection of the red carpeting. Being a detective is easy!

One strange detail? The smiley face from the opposite wall is reflected clearly in the upper right hand corner of the mirror between the two men. But—and here’s the strange part—we’ve never seen it reflected in the mantelpiece mirror before.

Take this similar shot of Sherlock and the excitable young Archie from episode 2 of Season 3.

Check out the reflection. Seems like whoever designed this promo was just very eager to include as many indicators as possible for the audience to know that this is their beloved Sherlock television show. What, no purple shirt of sex? If we’re doing a “spot the differences” between the two shots, you can also see an umbrella—the international symbol of Sherlock’s older brother, Mycroft—leaning up against the fireplace in the Season 4 teaser.

And now, here is where I confess that, like DI Lestrade, I consulted with an outside source for help to solve the rest of the case. According to the eagle-eyed Independent, some of the objects floating in the apartment flood might hold some interesting clues.

In the Doyle story “The Musgrave Ritual,” Sherlock hid his tobacco in a Persian slipper, just like the one floating by John’s chair. Is this a sign that Sherlock’s drug problem might come to a head?

The red book? Zoom in close enough, they say, and you can make out its title: Henry V. That’s interesting for two reasons. First, that’s the Shakespeare play in which the phrase, “the game’s afoot!” first appeared. But, if you’re really in the mood to overanalyze, Tom Hiddleston played the role of Henry in the BBC production of The Hollow Crown (Cumberbatch played Richard III). Hiddleston, as you might be aware, is the fan favorite to play Sherrinford “The Other One” Holmes aka the third Holmes brother.

The Independent also discovered that if you zoom in on the floating sheet music you can see that the piece is called “Miss Me?” Is this a sign we’re going to see a return from everyone’s favorite Westwood-wearing consulting criminal?

I watched the teaser 400 times on my own and no matter where I paused it, or whether I full-screened it, or how much I zoomed, I could not for the life of me make out the book or the sheet music title. I mean look:

Holy shit, I think I see it.

See you when Season 4 is out. 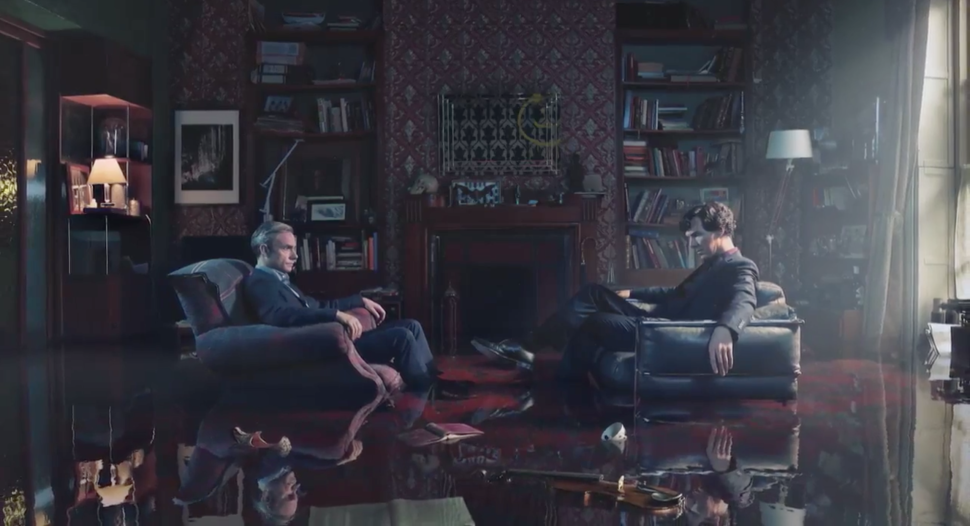