Similar to most 20-somethings, Tali Lennox‘s earliest recollection of the Chelsea Hotel, in its purest form, was a second-hand experience. “My first memory here was probably listening to Leonard Cohen or reading Just Kids,” she admitted. She was standing in El Quijote, the nostalgia-laced restaurant that is adjacent to the storied lodge, where the model-turned-artist was celebrating her latest oeuvre, “Ashes & Confetti.”

The Chelsea Hotel remains an untouchable relic of the rich artistic history of New York to Lennox and her peers. Riddled with nostalgia and days of yore, the hotel, which was built in 1873, used to be crawling with creative types, including Madonna, Patti Smith, Bob Dylan and so forth. Now, it’s in its last days, because according to The Real Deal, the hotel was recently purchased by Richard Born and Ira Drukier of BD Hotels, along with hotelier Sean MacPherson; they will soon turn it into a hotel/condo situation, thereby stripping it even further of its old New York charm.

“It’s a complete skeleton and it has been for five years now,” admitted Lennox, the striking, dark haired offspring of crooner Annie Lennox. But rather than simply mourning the vestige of creativity, she also wants people to celebrate it, which might explain why she chose to host her opening party at El Quijote, followed by an immersive experience in one of the hotel’s rooms that has been relatively untouched by modern New York.

The work in this show, which was open for only one night, had a similar balance of light and dark, but also celebration and mourning. Each of the 13 oil paintings were based on vintage photos that Lennox unearthed at various flea markets. There’s an eerie class photo from 1945, of boys in suits and girls in skirts, on an eerie black background, rather than a school gym or a library. A triptych of nudes smile blankly as their limbs fade into the ether. One thing you’ll notice from each of the photos is that there are no eyes peering back at the viewer. Instead, entire faces are blurred and eye sockets are left empty, like images from a horror story. Sure, you can tell that these are people, but their spirits are no longer tangible. In some ways, they seem to be staring out from a murky puddle or a fogged up window. “You can feel their energy but you can’t get through to them,” Lennox explained. “It’s a dead moment.”

Those were choice words, as the model/artist actually began this series of paintings just two months following the untimely death of her boyfriend, Ian Jones, who was also a model/artist. That first painting, “Men in suits”, was based on a vintage photograph of Yale’s Berzelius Society, which dates back to the ’20s. Dressed in black tie garb, the seemingly endless crowd of men are devoid of eyes, but their shadows are clearly etched in space. It’s a dark image, one that is understandably created as the result of deep grief.

According to Lennox, the creation of this piece was purposeful: “I was trying to understand the tunnel and disconnect of perception and memory and the profound terror and wonder of a presence that’s no longer there, but exists within your consciousness and that’s always going to be inaccessible.”

Though she tried to distance the paintings from her own life (“I don’t want this to be all about a personal experience; I want it to be something that everyone can relate to,” she said), Lennox kept coming back to a theme of loss and the lingering presence of something that’s already gone. In fact, most people could easily relate to what she’s put out in these works. She also made a point to say that her grief wasn’t an intentional focus of “Ashes & Confetti,” but rather, that she was subconsciously attracted to it.

Although “Men in suits” was painted directly following that painful and intense event in Lennox’s life, the rest of the series was created over the past month. So this evening was truly a celebration, as it left the artist’s apartment—which doubles as her studio—empty of these haunting works. However, she did bring along a bits and pieces of her apartment, as the only mixed-media piece in the exhibition. Sealed in a tower of clear plastic cubes, were seemingly random compilations of tchotchkes and, well, just things. Lennox referred to it as a “Memory Box,” and it was placed on a mirrored surface, lined with a trail of confetti. The contents included a string of pearls, plastic ponies and tigers, empty jewelry boxes, strips of film negatives, Buzz Lightyear, a mint and even a shell. Though some of it might have seemed like trash (Lennox did admit to finding some pieces “on the streets, in restaurants or delis”), some could be considered collectors items, as they came from her mother.

“It’s supposed to be this structure of the memories that lie within you, which are again, alive, but seen through a surface. The chaos of it, I think we all have it inside of us,” explained Lennox. Then, she had to run, her party was starting soon and she wasn’t yet changed into her outfit for a late night at the Chelsea Hotel. She left behind a trail of confetti on the black and white formica floor, like the ashes of an unforgettable party at the Chelsea Hotel. 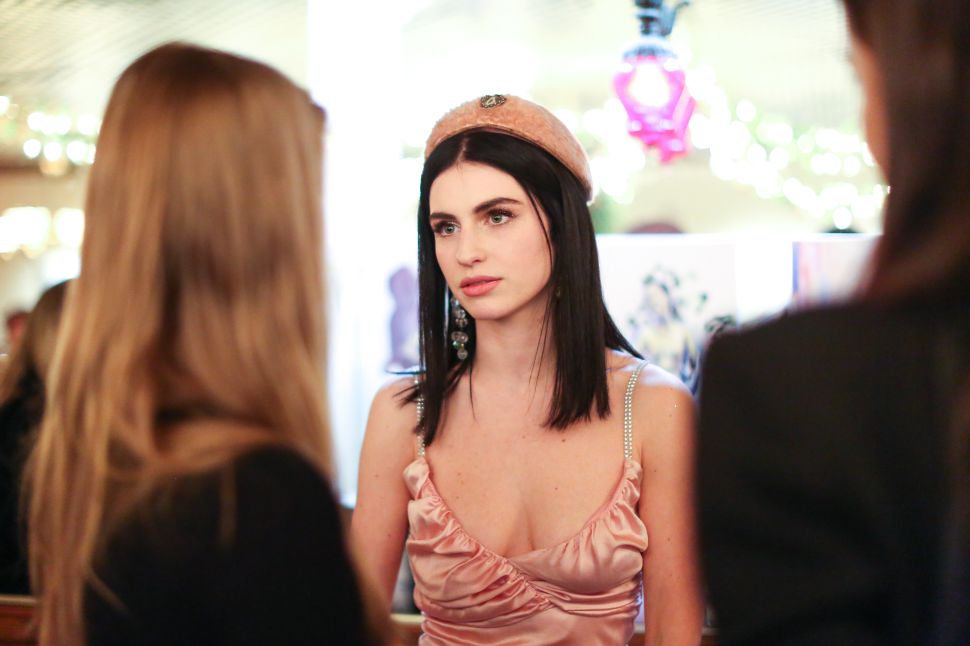