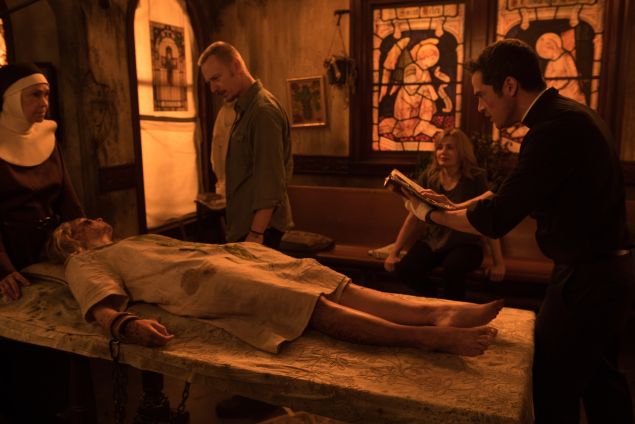 About a year ago, an eighteen-year-old girl, who had up until this point loved only homework, fell in love with an intense old man who sold her a plain brooch at the mall. Normally the bad boys girls go for are handsome, slick, charismatic, brooding, and virile, but poor Casey Rance didn’t know that, so she ended up with the ancient demon Pazuzu inhabiting her body, then her mother’s body, and it’s all vaguely tied in with a plot by various leading people in Chicago to assassinate the Pope.

This week’s episode began with demon Angela / Regan talking reasonably to the cops about the sudden death of her mother. She touches the police lieutenant’s hand and the demon in him acknowledges the demon in her and he decides to nama-stay out of the investigation. We flash back to last week and learn that Angela offered herself to the demon in order to save Casey’s life.

Meanwhile, Father Marcus, a REBEL PRIEST WITH NOTHING TO LOSE, goes to meet with his two most important sources, a couple of Cards Against Humanity champions who almost certainly had a zombie-themed wedding. They tell him more information about the Satanic cabal they’ve been tailing, including the fact that among them is a guy who worked at the center Marcus had been staying at, referred to in this scene as a “renewal center for deviant priests.” The show has already established this place as existing, but can anyone tell me if this kind of place has ever existed in real life, or if there’s anything in Catholic doctrine about rehabilitating “deviant” priests? It seems so ludicrous to me and the show talks about it so confidently.

The family eats with Father Tomas, and Captain Howdy in Angela’s body has to try and rein in his demonic tendencies. Henry tells Tomas that the post-accident befuddlement in his head sometimes takes the form of chaotic voices, which occasionally unify to say the number “162.” Marcus’s informants who seem like they have a lot of opinions about why Alan Moore’s The Killing Joke is so important take pictures of the cabal instead of skipping town like Marcus told them they should. The cabal meets and demon Angela shows up and gets them to bow to her. She tells Maria that she won’t be chosen for demonic possession because she’s not enough of an alpha dog.

A church official tells Tomas that there’s a promotion ready for him, should he accept it, but that they are closing his parish. He says they know about the affair he’s been carrying on with a married woman but that the promotion has been in the works too long for them to do anything now. This would be more interesting if it wasn’t driven by a demonic conspiracy and was more just representative of business as usual within the organization, if that makes sense.

Marcus creeps around in a cat burglar outfit and then tries to warn Tomas about Maria. Then we find out his two carnival-goth amateur sleuth friends have been killed in what has been set up to look like murder-suicide, which, to be fair, would be very on-brand for them. RIP, that couple– hopefully they’re somewhere with plenty of Fireball whiskey and Nick Cave records, someplace where Firefly was never cancelled.

Angela brings Mother Bernadette what looks to be fruitcake, and therefore must surely have been passed on from one demon to another for thousands of Christmases. Bernadette is on to her, though: “In the end, you’re just a child throwing a tantrum.” “Tantrum?” demon Angela says, “This is not a tantrum. This is a victory lap.” It’s amazing how politically prescient this show has turned out to be. Angela kills Bernadette Darth Vader-style and casually eats a piece of the fruitcake. Then the other nuns show up. This scene will be remembered forever by Exorcist fans as– are you ready for this joke?– “The Bread Wedding.” Thank you.

Angela talks to Casey about the experience of being possessed. I talked last time about the possession as metaphor for molestation, and this conversation’s subtext is very clear: Casey says it felt “Like nothing about me was mine anymore.” “Because he was inside you?” Pazuzu-as-Angela asks. Using classic abusive language but with a mother’s sweet intonation, demon Angela says: “You had to say no, I mean, that’s the game, right? But at a certain point, you asked for it.” Roger Ebert would tell you that it’s morally wrong and irresponsible for a sometimes-campy work like this show to incorporate this particular theme. I don’t know if I fully agree with that philosophy, but I do know he said that about Blue Velvet, and I saw a screening of Blue Velvet like a year ago and people were actually screaming at each other not to callously laugh at the campy parts.

Demon Angela makes a sexual advance towards Henry but then starts strangling him until he gets her to stop. Then Casey walks in on Angela gliding her hand gently across Kat’s body– “savoring what I have,” she says. This sequence starts to hit on a really scary notion but doesn’t dwell on it long enough– the idea of your mom suddenly becoming a harmful, antagonistic force haunting the house but acting too composed and normal for you to do anything about it.

Marcus goes and beats up the devil priest from the priest rehabilitation center. He blesses the priest’s bath water and starts waterboarding him in it. The evil priest tells Marcus about Angela and about the assassination plot. While this is happening, Tomas breaks it off with Jessica.

Casey tells Henry and Kat they need to get out of the house before demon Angela kills them, but Angela makes the family listen to her speech about how the demons are going to take over the Earth. Tomas opens Chris’s book to a random page and reads a passage and figures out what the demon is up to right now. Just as Angela is about to kill Casey, Tomas bursts into the house.

This week’s episode featured not one but two villains giving the “Here’s everything I’m going to do and how I’m going to do it” speech, but the plans and motivations still don’t make any sense. How does assassinating the Pope during a parade secure demonic rule over the world? And what does that have to do with taking over a girl’s body and then messing with her family a generation later? Why not, say, use rhetoric and legislation to push a demonic agenda and normalize demonry? I’ll see you next week– for the finale!– and if I don’t, you’ll know why. It was because I went public with the plot holes in the Satanic cabal’s plan. 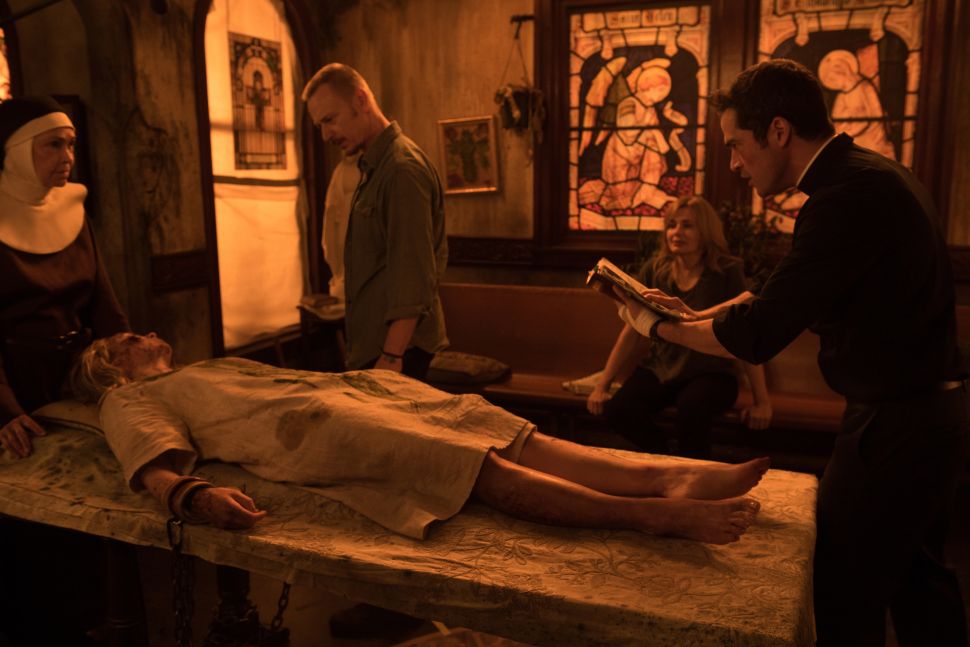