Breakfast with Josh Radnor comes without coffee. “It was leaving me feeling a little wired, so I quit about two years ago,” he explains before turning to the waiter at the Westside Restaurant to order English Breakfast Tea, with milk and honey. “I still drink a ton of caffeine.” He smiles reassuringly to the coffee-drinker across from him.

The popular diner on Upper Broadway has been his own personal Schwab’s since it’s closest to where Lincoln Center has lodged him while he makes his return to New York theater after nine fame-making, name-making years in L.A. sitcomland as the “I” of How I Met Your Mother. He went out there an actor and came back a star.

It’s now the actor with a higher-recognition factor who has boarded The Babylon Line, Richard Greenberg’s play, which bows Dec. 5 at the Mitzi E. Newhouse Theater.

“The broad-stroke outline of the play,” he says, “is I play a poor, struggling, slightly blocked writer who’s living in the Village in the late ‘60s and, to make a couple of extra bucks, takes a train to Levittown, L.I., once a week to teach creative writing to housewives. It ends up being impactful for all. Essentially, this is a classroom tale.”

He gave the play a test run two summers ago up at Vassar at New York Stage and Film where he usually spends his hiatuses working on new plays (a habit he picked up at 19 when he apprenticed there). “Then we did a reading at Lincoln Center in January, and they put it on their 2016-2017 schedule. I didn’t know if I’d be free at the time, schedule-wise, but ‘the furies’ hounded me ceaselessly, mercilessly, to do this production. Happily, it just worked out beautifully, and I was available to do it.”

The “furies” would be Julie Halston, Randy Graff and Maddie Corman, who play a trio of homemakers with literary aspirations in his class. Frank Wood and Michael Oberholtzer are repeating the course as well. In fact, all but one of the original seven-member Vassar cast caught The Babylon Line for the New York engagement.

“Having done it with them before, I knew how brilliant they were—and how kind and lovely they are,” says Radnor. “It feels like a proper company, like an ensemble.

“That’s how I was trained at NYU. I love the idea of a company. I love the idea of the parts coming together to make the whole thing. Everyone serves the play first, which is a nice thing to be a part of. There’s not a person in this cast I wouldn’t be delighted to have dinner with. Everyone’s really special, unique in their own particular ways.”

The newcomer to the cast, Elizabeth Reaser, provides a little love interest for Radnor, as she did in his film, Liberal Arts. “She plays a student with agoraphobia who hasn’t left her house in a long time,” he says. “She’s a very fragile, very brilliant woman who has kinda ventured out into the world just to take this writing course.

“Richard’s play is so theatrical that it performs better than it reads, I think. The experience of reading it and being in it are vastly different. It wouldn’t work as a novel. The language is poetic and colloquial at the same time. There are these gorgeous passages, but it also sounds like that is just the way these people talk.

“Once you get it on its feet and in the air, the language comes alive in a different way. A lot of the stories the class writes come to life, and different classmates act them out. Then, the second act goes into this more cosmic story. It’s very unpredictable. If you think you see where it’s going, yes and no. It’s much more surprising than that.”

Radnor made his Broadway debut in 2002, replacing Jason Biggs in The Graduate, opposite a formidable Kathleen Turner, and lived to tell the tale (although he won’t).

Twelve years later, he returned to Broadway in Ayad Akhtar’s Pulitzer Prize play on Islamophobia and the skewed self-identity of Muslim-American citizens. “Now, that was an amazing experience,” he declares. “The architecture of that play is so sound you feel held by it—like, it’s moving and the audience is being pulled along with it. It has such propulsive energy. Once it starts, it just doesn’t stop. It keeps escalating.

“It was fun to be inside of that play and feel the audience. You’re in a dialogue with them all the time, but it felt like the audience was really having a deep, deep, not unsuspenseful experience with it. There was something special about presenting it at that particular moment. After Hand to God, it is right now the most produced play in the country, so that moment when that play feels quite relevant is still existing.”

The first indication Radnor had that his career was heading in the right direction was when he received an acting award at Kenyon, named after the college’s most famous alum, Paul Newman. He can’t put his hands on it at the moment. “I think it’s at my house, but it’s not visible. I won it for Donald Margulies’ Sight Unseen. I played the artist in that for my senior thesis. It was a great play and a terrific playwright.

“When I was in college and grad school, I had a best-case-scenario vision for myself: I thought working on new American plays with living playwrights in the room, figuring it all out together—that, as an actor, would be terribly exciting, and I’ve been blessed to be able to do that with Ayad and Richard. That one-two punch feels like I’m really throwing myself back into theater, which I consider my home base as an actor. And to have these incredibly rich, rewarding plays to work on is a dream.”

It was originally announced that Radnor had been tapped to be the guy who brought Laura Benanti ice cream in Roundabout’s She Loves Me—a logical transition from How I Met Your Mother—but it collided with his next, and current, series. Luckily, he didn’t wait long for a better offer.

“I got this role of a 19th century, morphine-addicted surgeon in a Civil War hospital for a PBS series called Mercy Street. It was such a profound experience for me, playing this role. It sounds like The Knick, but it’s an earlier era. We did, however, have the same medical advisers. And I had an amputation scene. I had to amputate my own brother’s leg on the show. Our second season is set to start in January.”

By spring, he expects to be in Krakow, taking on a third medium: feature films. Untitled at the moment, this will be the third he has written and directed. Unlike 2010’s Happythankyoumoreplease and 2012’s Liberal Arts, he won’t star in it.

Radnor is very much the late-blooming movie buff. ‘Since becoming a filmmaker, I’ve been trying to fill in the gaps of my cinematic knowledge.’

“I was on the jury of a film festival in Poland a couple of years ago, and I loved it,” Radnor recalls. “I ended up going to my grandmother’s town, a little town called Pinczow about an hour outside of Krakow. I had an idea that was kicking around in my head, and I thought, ‘Why couldn’t this be in Krakow?’ so I set it there.

“There’s a part of me that really feels like a director, and I’m trying to honor both impulses in myself,” he confesses. What’s more, he doesn’t feel compelled to settle on one. “I almost feel like I have to decide, but I don’t, really. No one’s asking me to.

“Sydney Pollack considered himself more of a director than an actor—although I always thought of him as a terrific actor—and he once said he’d only take film-acting jobs if he wanted to spy on the director. Directors don’t get the opportunity to watch other directors work. They’re really in a bubble as a director. I think if he were curious about a director he’d just take a role if they offered it to him so he could watch how the director worked. I thought that was a really smart thing. He’s a real hero of mine, artistically. I thought he kept going in a really interesting way.”

Radnor is very much the late-blooming movie buff. “Since becoming a filmmaker, I’ve been trying to fill in the gaps of my cinematic knowledge. I love the Criterion stuff. I saw Louis Malle’s Murmur of the Heart, and I loved it. Did you see Moonlight? That’s another piece of art that stays with you and grows, long after you’ve seen it.”

So, too, does a particularly perverse favorite of his: Skidoo, Otto Preminger’s mega-flop, which had Jackie Gleason tripping in prison, a Carol Channing-Frankie Avalon sex-romp, all-sung closing credits by Harry Nilsson, “and Groucho Marx as ‘God.’ ”

“It’s the weirdest movie ever made, right?—certainly one of the best worst. When I describe it to people, they don’t believe me.” [Don’t feel badly: Even IMDB hasn’t come up with a synopsis.] “The studio recruited Otto to make an anti-LSD movie, and a friend of his said, ‘Don’t knock it till you’ve tried it,’ so he did and loved it and tried to sneak in a slightly positive message. It’s the most requested DVD. In fact, there is no DVD. There are only a couple of prints. A friend of mine in L.A.—he calls himself ‘the world’s one and only Skidoologist’—does screenings. I went to one at the Egyptian Theater and couldn’t believe it. He said, ‘If you hate this, wait five minutes because it’ll be a different movie.’ It’s all over the map. He’s still trying to get Paramount to release the DVD, but the Preminger estate doesn’t want it.”

Thoroughly tanked on tea, Radnor takes off for the “office”—the rehearsal hall in the bowels of Lincoln Center. Because The Babylon Line has a flashback framing, he has drawn double-duty, much like the stage manager in Our Town: “I’m both in the scenes and also talking to the audience quite a bit. I’m in it both as a character and as a narrator. Which sounds a little like How I Met Your Mother, but it’s not. The older me is 87, and the younger me is 38. Because I’m constantly going back and forth, I don’t play older—just younger. There’s a joke about that at the beginning.

“ ‘Rich’ is truly an astonishing playwright. I can tell because the more I do this play I keep hearing new things. I keep making connections, almost literary connections about certain things he’s done thematically that are so brilliant that you probably wouldn’t get on a first viewing, but it makes the experience densely rewarding. I think it’s going to be a really wonderful experience for the audience, especially Lincoln Center’s audience. You can hear some chuckles over some of the local Levittown references from people who sound like they grew up on Long Island.” 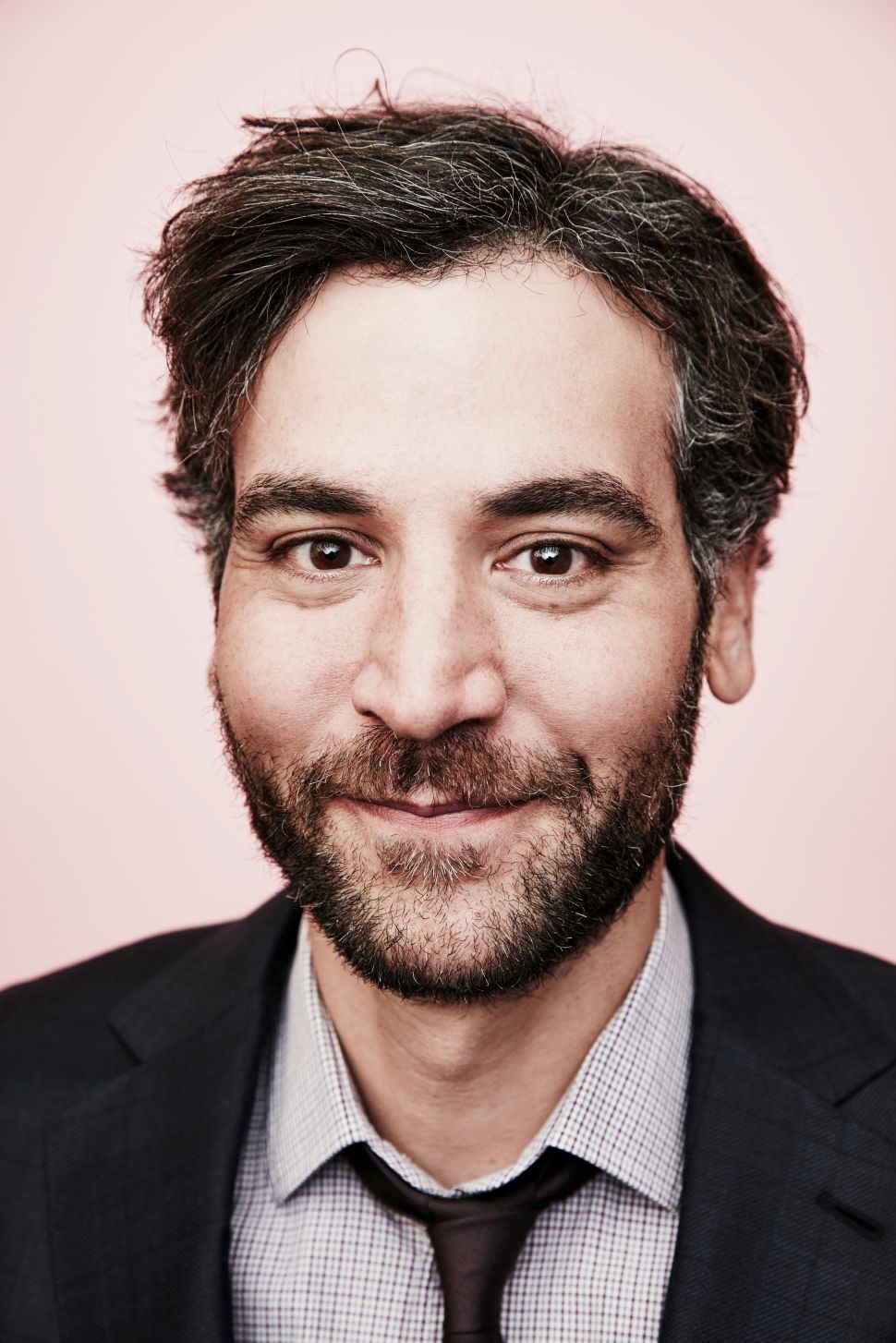 Filed Under: Entertainment, TV, TV, PBS, How I Met Your Mother, Josh Radnor