Something has changed on the left. Where once protesters stood against the Vietnam War, and took to the streets to rally against real injustice, no matter how they were insulted, or mocked, or called damn hippies, they now stand against hurt feelings.

Today’s left is different. They will (rightly) criticize climate change deniers and creationists, asserting they are anti-science, while in the same breath insisting there are no biological differences between males and females. Teenagers at Yale speak of oppression and the need for safe spaces without the slightest sense of irony. Outrage is unleashed when burritos are served at a sci-fi themed party, as the tenuous connection is made that burritos insinuate all Mexicans are illegal aliens.

We’ve reached ridiculous times, and no group is worse than today’s left.

The world is so much better and safer than it was during the ’60s and ’70s that today’s protesters struggle to conjure up injustices. You’d be forgiven for thinking that a college campus is more dangerous than downtown Ramadhi these days. Yes, the people I’m talking about are mostly college kids—but rest assured you’ll find them in the real world as well. Plenty of forums online are nothing more than a group of “oppressed” whining in their echo chambers about how horrible the world is (and particularly Western civilization). Would that they realize the irony of complaining about a world where you are surrounded by and benefit from the luxuries created by your “oppressors.”

To be fair, I’ve seen various, perfectly reasonable articles on why having safe spaces and trigger warnings are important, even in colleges. That said, the outcome belies the intent. Having a safe space because someone whose views you disagree with—such as Christina Hoff Sommers—visit your college is a perversion of the original intent. A trigger warning is for people who have actually experienced trauma, like a military veteran—not for people who profess to be the victims of microaggression because someone, somewhere, disagrees with their opinion.

It baffles me that no one in the mainstream media is willing to point out that there is a constant stream of circular logic with this group. Consider the fact that it is often argued gender is a social construct, and there is no difference between men and women. At the same time, such groups will decry the lack of female representation in tech, government and boards. If gender is merely a social construct, and men and women are the same, would it not follow that female representation is irrelevant? You can’t have it both ways.

And where then does this leave homosexuality—which is claimed by many to be genetic, and not a lifestyle choice. Apparently men and women having a different chromosome makes them no different to each other, yet gay individuals, who have no differing chromosomes, are somehow born that way. This is the problem with so much of the left’s narrative: When you start to pick away at it, the whole argument falls apart faster than a dandelion in a strong breeze.

Then we have objections to cultural appropriation, which have resulted in a banning of certain Halloween costumes at certain campuses. It’s the ultimate form of nanny statism, which seems to be almost solely perpetrated by college students in Western countries. Most of the time, the complainants against cultural appropriation (which is ill-defined at best) don’t even belong to said race yet will talk endlessly about how damaging X costume is and that it perpetuates oppression and racism—conditions they have no experience with themselves. It would seem that so many of these people have white savior complex, something they would be the first to point out, when it happens in such Hollywood movies as Avatar. Is speaking on behalf of a minority group not a form of oppression in itself?

While we’re on the topic of dressing up, this year, I even saw a guide to not dressing like an asshole on Halloween. There were the standard things like not donning Native American headdress, not wearing kimonos and such, but my favorite was the author telling people not to wear a Harambe suit because it’s “vaguely racist.”

And this is why reasonable conversations can’t be had with so many on the left. A simmering “that’s not okay” instinct overrides the facts—whether historical, biological, or otherwise. If any of those conflict with their narrative, the other party will say they are offended, hurt, shocked. Worse yet, they’ll tell the other person to “educate themselves,” always with material that is in agreement with their opinions, even if it is utterly false. They will endlessly mock Christians, yet they act no differently than a creationist citing unscientific “proof” that God exists. Try refuting the assertion that “rape culture” exists with facts and statistics, for example, and you’ll be branded a rape apologist.

The most baffling, unbelievable case I’ve seen recently was gender studies professor Nick Matte, who has stated that “the scientific consensus is that there is no biological difference between men and women,” and that scientists have been showing this for 50 years. So at this point it’s okay to lie when it serves your purpose. That a professor is happy to do this should make us all question the value of the humanities at the university level in 2016.

We’ve reached a point where the content of your argument doesn’t matter, because it’s where you fit on the oppression scale, and what your narrative is that counts. Facts are nothing more than a means of oppression and are considered a form of violence in themselves, whereas a narrative has feeling and emotion. If you’re denying my narrative, you’re denying my experience and feelings. The gender wage gap has been debunked ad nauseum, and yet we still have protestors screaming that men are unjustly making more money than women. In any discussion, identity is key; disagree with a woman on anything where they assert they are oppressed, you’re a misogynist (hence why we have so many feminist myths that won’t die). Disagree with someone transgendered, or use a term that you’re unaware has suddenly been deemed offensive, and you’re transphobic.

The right beliefs don’t make a human being good—their actions do.

Isn’t it ironic that over 50 years ago Martin Luther King Jr. expressed a desire to have children be judged not by the color of their skin, but the content of their character? Those on the left now do the opposite, except they’re judging skin color, gender, and sexual orientation. Depending on what features you have, or what orientation you are, you’ll either be welcomed as a voice of reason or shouted down as having too much privilege. Even if you are from an acceptable group, if you stray from the herd and question the status quo, you’ll be branded as someone that has been so brainwashed that you can’t even see all the ways you’re oppressed.

It’s little wonder so many people feel stifled by political correctness nowadays, because the most obscure and unreasonable expectations are being rammed down our throats. I have often read the following retort against those who take issue with political correctness: Basically, people who are against “political correctness” are upset that they can’t be an asshole without being called on it.

Actually, they’re generally upset that any time they have an opinion which doesn’t gel with a liberal’s worldview, they get called a racist or a bigot. They’re upset that someone is appointing themselves the judge of all that is decent and arbitrarily deciding what constitutes right and wrong. What they’re objecting to is someone placing themselves in a position of power with no elections or due process, and telling them what they can and can’t say.

The irony is that they think their beliefs make them good people. Here’s a newsflash: They don’t. The right beliefs don’t make a human being good—their actions do. There are plenty of hardworking people out there that mean well, contribute to the world, and just do their best, who may hide what many consider to be objectionable views. These people are now apparently public enemy number one. And then there are the virtuous university students who will do their best to sink the career of a professor or teacher for merely saying something with which they disagree.

And that’s what the liberal left is now. They don’t care about injustice, and they don’t even really care about hurt feelings. What they care about is appointing themselves the supreme authority. They’ve decided they are the most virtuous, educated, and wise in society and thus they should be in charge of all the sheeple. The anger and rebellion of youth trying to change the world was never a problem before now, because those in power rightly dismissed it as kids just trying to find their path and make a place for themselves in the world. But now, professors and even governments bow before their vitriol and abrasiveness. One need only see the video of the girl at Yale screaming at one of the faculty staff, “This is our home!” She’s in his face, and he’s submissive and apologetic.

The arrogance and ignorance of this student is breathtaking, yet if the professor was to shout back at her in the same manner, he’d be fired. It’s surreal and frightening that people so young and sheltered are able to extract concessions purely because they’re not afraid to yell loudest.

That university students with no experience of what it’s like to live in the real world hold so much power and sway over society and government should give us all pause. This isn’t something to be laughed off or dismissed as no big deal, because we’re already seeing legislation that makes it a hate crime not to refer to someone as zhir if they choose it. If you have no idea what that word is, congratulations, you’re most likely someone with bigger concerns like rent and feeding your kids. Unfortunately, the price of not paying attention to such nonsense now is that in the future, you’ll be living somewhere speech is heavily governed, and regular people only say what they really think at dinner parties with like-minded individuals. What a marketplace of ideas that will be; what a waste of the left’s passion and drive against injustice. 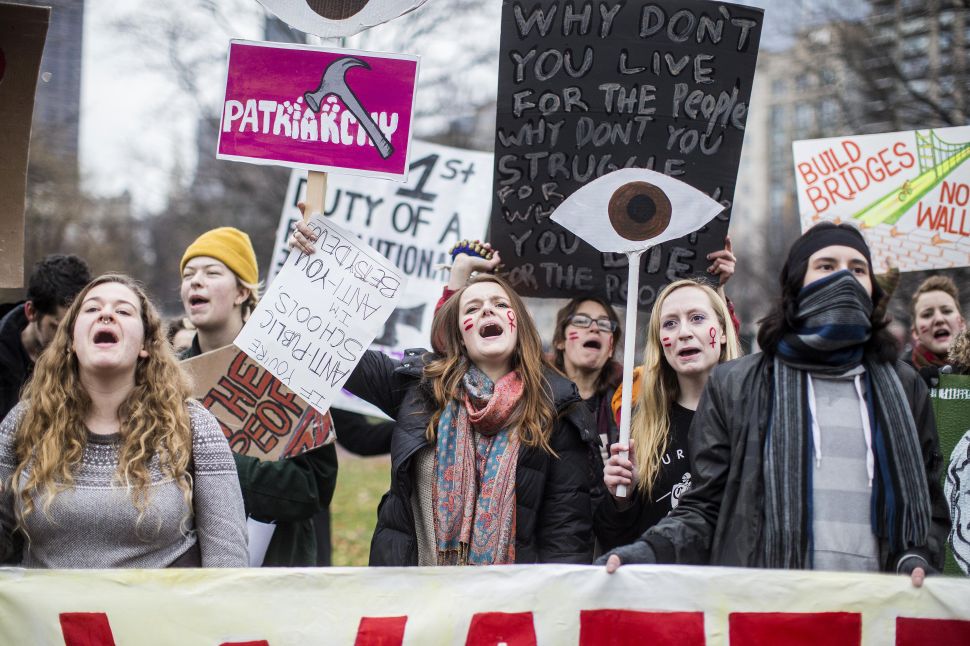