By now, you’re probably sick of hearing about The OA from the three of us over here at tvDownload. Especially since if you’re a normal, none-masochistic member of society, you probably did a hard “nope” once Netflix released its trigger-warning of a teaser trailer on Twitter. (Say that ten times fast!) Why do we care so much about a show that we can all agree is uneven and incoherent at best, and totally Batmanglij-shit crazy and blithely offensive at best?

Well, to be fair to Vinnie and Dana, I locked both of them in plexiglass cages housed in my basement hothouse that doubles as a mineshaft until they agreed to write about the show. So don’t blame them; they are busy blaming themselves. And I’m not going to waste breath trying to explain the plot to you, or bother expressing my outrage over that terrible, terrible final episode. In fact, I quite enjoyed watching The OA over the course of last weekend. Was part of that because I watched all the episodes while twacked-out on Ambien, and then somehow missed the finale because I thought it just ended after episode seven? (Btw, if you leave off that one episode, the show almost–but not quite–stands up.) Perhaps. Is it because The OA is to date the only mashup of Hanya Yanagihara’s A Little Life and Lev Grossman’s The Magicians in existence? Maybe in part. But that’s not really it, either.

No, what I loved–and hated–about The OA had nothing to do with the cult, the open doors, the narrative structure, the movements, Steve (though I did like Steve! Evan Peters five years ago could have played Steve!) or the fact that Betty Broderick’s brother (say THAT ten times’ fast!) was named TheO Allen. The real beating heart of this show, in my opinion, wasn’t Brit Marling. It was Jason Isaacs. And here’s why everything Dr. Hunter/Hap was and did in the course of the season stands as a perfect microcosm of the frustration and delight of the program as a whole.

Here’s the deal: Hap–played by Lucius Malfoy (or as I colloquially call him: “the blond dad from Harry Potter. Mr. Blondie? You know?”)–is first introduced to us, and Prairie in episode 2. He’s an odd bird…literally accosting a blind woman playing the violin in a subway station and badgering her into eating at the Oyster Bar, but he’s not exactly bad. You can just tell: dude is too whimsical to be pure evil. Like, he’s patented this device–which he just so happens to have on him!–that allows you to single out individual heartbeats in a crowded room. Why is this a thing that anyone besides a blind woman would be interested in? Does this help the medical community at all? Did the device need to look like something a Dilaudid-out Jeremy Irons would create for gynecological surgery?

Irrelevant. Let’s not spiral out here, people. What’s important is to know about Hap is the following.

A) He is a doctor who focuses on NDE (Near Death Experience patients).

B) Possibly an anesthesiologist.

F) Hunts down and kidnaps NDEs to lock in his basement to experiment on, with no real idea about what he’s looking for, or why his victims should be kept in something resembling a trap from the Saw movies. (He’s not a sadist, that gets established pretty early. He’s just kind of a troubled guy!)

G) Is in a Murder Club of two, with the other member being another doctor/academic sort.

H) He has all his food delivered to him, Fresh Direct-style.

And lastly, but most importantly:

I) Hap is DEATHLY ALLERGIC TO TOMATOES.

Now, let’s focus on these last three points, because they are super vital. Here we are, at the Oyster Bar in Grand Central, where Hap takes Prairie to seduce her with gross shellfish. She really doesn’t like them, and neither does he (weird choice for a restaurant, Dr. Brah!), so he orders them french fries instead. Which leads to this:

Now, Hap never eats the french fries, but he’s definitely not a man who is afraid to let his mitts hover over some condiments. Who cares, right? How can this be related to the central mystery of the show?

Well, in the very next episode, after it’s been revealed that Hap has kidnapped Prairie but also is allowing her to make food for him, she decides to escape by crushing up his sleeping pills and mixing them into a borscht soup. It’s a very tense couple of scenes, and you do have to hand it to the camerawork here, which frames itself super tight over Prairie’s shoulder, so you can never see if Hap is lurking nearby while she tries to execute her plan. There is a whole dramatic deal about fresh parsely, and whether or not Prairie herself is going to have to eat the soup she prepared, because Hap isn’t a fucking idiot and wouldn’t just put stuff in his mouth prepared by a blind hostage.

Except he does. And he starts choking. Which is when shit gets weird.

So Prarie’s plan is foiled, not because Hap is a super genius, but because the dude is allergic to tomatoes. So allergic, in fact, that he keeps TWO EpiPens around for just this reason. So, here are my questions:

See, I’ve done some research into this, because what else do I have going on these days, and it turns out that are VERY few people who have fatal tomato allergies. Symptoms are triggered by fresh, not canned tomatoes. Really, there is only one big case that I found where a kid almost died from an anaphylaxis reaction to the fruit. (Oh yeah, tomatoes are fruit. That’s never sat right by me, either.) And how did this kid almost die?

So look, that’s it, really. That’s my main issue with The OA. The case of “Jason Isaacs’ magic tomato allergy” in this show is the most egregious plot hole I’ve ever seen, especially because, again, this kitchen scene takes place ONE EPISODE after it’s been established that Hap can touch ketchup. EpiPen doesn’t even list “tomatoes” under its food allergies section. It’s never addressed that, in addition to being allergic, Hap has also been POISONED with sleeping medication, presumably because he doesn’t eat enough of the borscht to go night-night.

You know that adage about Chekhov’s Gun? The OA seems to think this translates into “If you have a tomato in the first act, it has to become a gun in the third. And then go back to being a tomato, because who cares, really?” Because let’s be clear: this scene is a one-off, and is never addressed again. Prairie at NO POINT goes back to her little hamster house saying, “Hey, we can possibly use this guy’s intense food allergy against him!” This never comes up. I don’t even think she tells anyone about Hap’s tomato allergy. It’s pointless. It’s all so pointless.

Also, yeah, everything else about this show is a Chekhov Tomato. It’s so bad. And yet, mmm-mmm good. 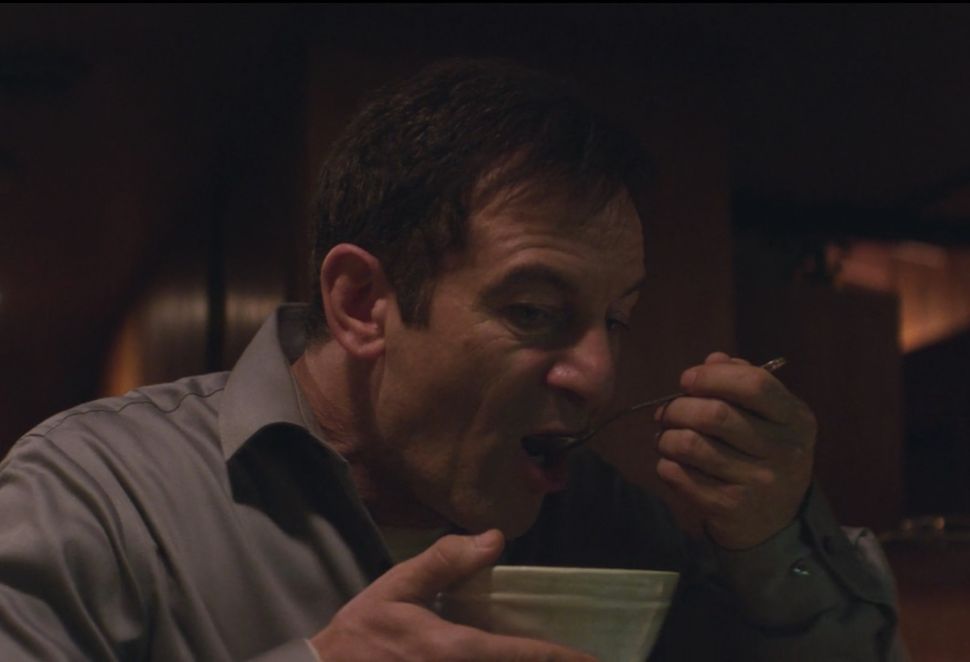