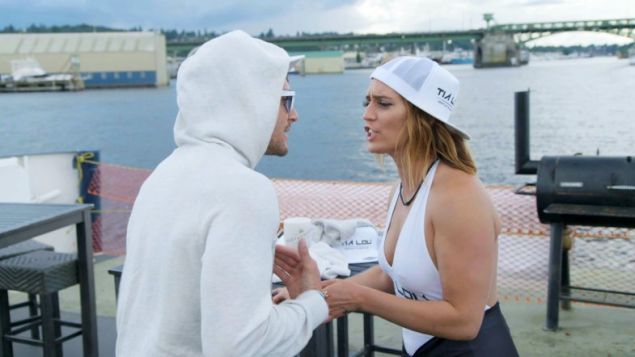 The Real World team called this episode “Surprise!” and they weren’t playing. Several different types of surprises happen this week, which is how you can tell something is named well. If the title doesn’t work on seven or eight different levels, it is useless. Absolute minimum five entendres or you aren’t trying hard enough to justify meaning onto it.

Peter turned twenty-five so Jenn decided to throw him a surprise party. She worked up a plan to have DJ Masserrobbie take Peter out for a drink so she could decorate the house and everyone could go put on costumes. Jenn even bought Peter a panda onesie. The costumes were on some Mean Girls level, like Jordan was wearing lingerie with bunny ears, and Anna was wearing a bra with angel wings, but then Anika was wearing a bra with a genie hat and nobody knew what she was and everyone was like “why did you do that?!?” Kim just went as Kim because Kim might be the low-key coolest in the house, which we’d know if she ever got screen time.

Peter loves his party except does he really because he’s saying the words “I’m happy” but his face looks like he is not happy which is a strange contradiction to see on someone. Everyone goes out in their costumes and the party is such a hit, Peter asks Jenn to be his girlfriend in the confessional, which is the most romantic way you can ever be asked out in my opinion. But the honeymoon doesn’t last long because a few days later they’re on a boat and Jenn is dancing in a bathing suit and Peter gets mad. The big surprise here is that Mike was absolutely right. He called this weeks ago about Peter: “Wait until he starts getting jealous, it’s his pattern.” When Mike was there, Peter came off one way, like he might be a pill but oh, look how bad Mike is. Without Mike there, Peter’s personality is a lot more clear. It’s like a flashlight in the sun of pettiness. Peter does not want a girlfriend of HIS to be twerking without HIM. Surprise!

That boat was actually the jump off for another surprise-inspired drama. Orlana likes Kass. They’re friends in the house. Kass doesn’t know Orlana likes him. Kass dances with a girl on the boat. In front of Orlana. Orlana takes it as him being disrespectful. Kass doesn’t understand why she could possibly think that, seeing as they never talking about feelings or lack thereof. Kass also doesn’t think the Weed in the Muscle Milk (TM) is his because he didn’t get caught with it. “Is that weed yours?” they will ask. “How can it be mine if I didn’t get caught with it?” he will answer. “But did you put it in the Muscle Milk in the first place?” they’ll respond, slightly less patiently. “How could I put something somewhere when someone else got caught for it, doesn’t make any sense.” and this will go on forever until your head explodes like Peter watching his girl have fun.

I like Orlana. I think Orlana is cool and funny and smart and good looking. But the second she started catching feelings for Kass, I was like “this will not end well for you, my friend.” It wasn’t that bad. Jordan was right in her Robbie-esque pep talk. Orlana didn’t get played. But in total fairness, I’m not sure Kass did anything wrong this time.

Anna and Katrina still can’t get along on a consistent basis. At first it seemed like they juked the system by convincing everyone that they were Bad Blood enough to get on the show as rivals and then enjoy a lovely summer vacation together in bed without pants on. But they can’t not argue over the tiniest of things. Anna won’t help Katrina go to the bathroom when she’s all safety pinned out in her costume. They each think the other is being selfish and not there for them and saying the meanest things. Anna will be like “she’s jackhammering into me.” Then Katrina will be like “she hit me with a wrecking ball there.” Then they’ll both be like “my world is turned upside down by her earth-mover of hate.” It’s so bad that their mom is flying in to settle things down and be like “you girls stop playing on that construction site of sibling angst and hug it out.”

Hey guess what, Kim got some screen time! Surprise! With Theo gone, Tyara decided to finally talk it out with the her high-school bully, bully pronounced in a slight British affect. I’m still not sure how any of this high school-era drama went down, even after hearing them talk about it. Because Tyara keeps saying she was cyber-bullied but it sounded like Kim told Tyara that her butt was fake to her face in class and then somehow that rumor spread across the school. I’m sure people were hitting her up online, I’m not doubting anything, I just don’t understand any of it. Kim apologized because Kim seems great. But Tyara is in for a much bigger surprise. She’s peeing constantly and hasn’t had her period in two months. So she takes a pregnancy test and fails or passes depending on your outlook. In a season when we get to watch what its like for two single dads to be on there we also just got to see what happens when someone finds out they’re pregnant.

Nobody should have to be caught on camera when they discover some unexpected news like this. It’s a private reaction. But Tyara has to call up Producer Matt and tell him. She’s seven weeks pregnant, enough for it to have been her ex-boyfriend at home’s baby. Not that she slept with Theo anyway but that really would be the ultimate The Real World baby if it had been. Conceived in the house? I can’t contemplate that. Producer Matt is like “how did this happen? I mean I know how it happened but like…” And then the episode ends. Surprise! 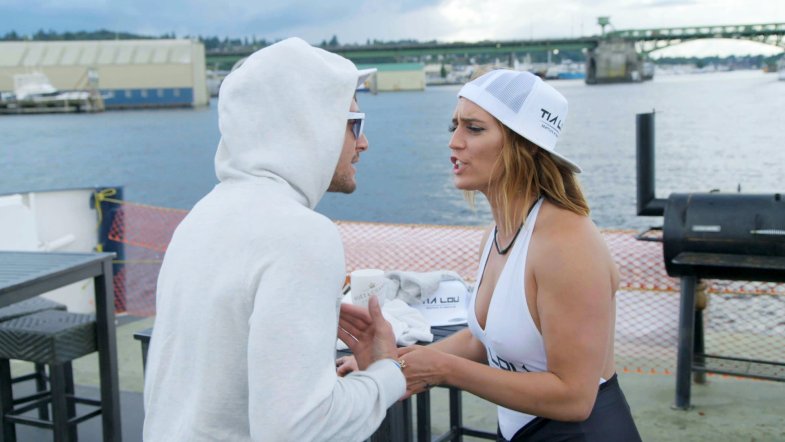