A few weeks ago I was just talking about how everyone in The Real World house was coupled up. Mike and Jordan. Peter and Anna but then Peter and Jenn. Theo and Tyara. Will and the Funyons. There was even a Kassius and Orlana romance building. But those days of wine and roses have come crashing down like Jack Lemmon breaking into a greenhouse to find a Brandy Alexander. Now, everyone in the house has beef. Mike is gone. Theo and Tyara don’t speak. They moved out of their loft room. Actually, Mike moved into that spot before he left so maybe that upstairs is cursed. Better light some sage or send John Cusack in a Aloha shirt before it catches another body. Because Theo and Kassius’s beef, Theo is gone, too. Now we’ll never know Who Put the Weed in the Muscle Milk™. Even Robbie, the happiest puppy on the planet, caught beef with Anna because she didn’t take part in the family dinner. Listen, when someone dry-ice ships a Styrofoam container of ten containers of sauce and ninety-five meatballs from the east coast all the way to Seattle, you stay home for dinner.

The Kassius-Theo beef was the main focus of this week because it’s been building all season and even before that in their lives. I can’t say I understand their relationship. They should just not be around one another. Like I get the “blood is thicker than ” mindset in theory but also it’s okay to just never talk to someone again who ruined your life and has no remorse for it, whether your parents happen to be brother and sister or not. I got a cousin that I like okay and if he ruined my chance of getting drafted into the NFL, I wouldn’t pick him up when he passed out on the floor from tequila, shoutout Kassius. Shoot, if my cousin ruined my chance of getting into a Madden Tournament, he’d be dead to me forever. I’ve spoken about how lax the fighting policy has gotten on The Real World in recent years. Last season on Go Big Or Go Home, one roommate ran at another like the beginning of a four-minute no-cut Daredevil fight scene was about to start. The pushing and shoving between Theo and Kassius was lightweight, you could tell neither of them wanted to hit the other one. It’s probably the lamest “fight” anyone has ever been kicked off for. That said, this was going bad fast. Kassius said he has no interest in trying to work it out. If they let Theo stay, it might have gotten worse. Like Ceejai’s fist to Jenna’s face being the main thing to go big and go home. Theo seems like a good dude. Kass seems rougher around the edges. Should they both have gone home? Who knows. Maybe this opportunity was ruined. Or maybe they were just saved from something far worse happening. We don’t get to know either way.

With all of the beef going down this week, it’s easy to lose sight of how much greatness we got from the Production staff. The switch-up to feature behind-the-scenes has been a major addition to the recent seasons. Not to take away from this dope cast but we had four fantastic production moments this week:

1)    Anna and Katrina are cuddling in bed. They’re sisters. It’s fine. They’re talking about meeting mountain men with thick-thighs. Anna mentions that it’s weird and gross that Katrina is straddling a pillow under the covers with no underwear on. Look, I don’t know the rules to this sister thing. Is this weird? It feels a little more weird than if she had pants on. Anyway, all of this conversation—the mountain men, the sisters, the lack of undies, the pillow lead the boom operator to lose it. She just busts out laughing. You can tell it’s real and she can’t help it. She’s practically in tears. It’s wonderful.

2)    Kassius and Theo get into an argument in the interview room while a producer is asking them questions. They start to yell and then they get up and face off. This smallish-producer comes running in between them to break it up. She’s like ¾ their size and wearing cutoff jean shorts. Any job where you can do your job in some high cutoffs is one that I want. Very impressive. But it gets better. Kass goes back to the house and recounts the story. “What’s the lady that walk on her toes name?” That’s how Kassius describes the producer who broke up the fight. And Tyara knows exactly who he means! “Courtney.” So this has come up before. This producer, who they’ve probably been working and living sort of near for weeks now is “that lady that walk on her toes.” Courtney, you and your toe walk and your shorts are the best. You’d be my new favorite but there’s a long-timing running producer around here that is champion. And his name is…

3)    Producer Matt shows up in the episode, with his “producer” hat, not once but twice. You know something worth watching is happening if Matt shows up on-camera. Producer Matt is brought in to deal with the fallout of the Theo-Kass shoving match. Producer Matt wants to know if Kass wants to try to work this out. Producer Matt reviewed the footage and has to tell Theo he’s going home. You don’t use your bullpen for these decisions. You use your ace. Plus, I would watch a spinoff show that was just Producer Matt reviewing footage. Sitting in a secret room in the house in front of a huge screen, strapped into a chair with those A Clockwork Orange metal clips holding his eyes open while he rewinds back-and-to-the-left, back-and-to-the-left for hours. Who pushed who first? WHO THREW THE FIRST PUSH??

4)    And then finally, DJ Masserobbie, everyone’s fave motivational speaker / man on the mic makes a white pizza and delivers it to the production crew. I know that move. It’s a good move. It’s some 1950s bring your teacher an apple but this Willenium so they get a pizza instead. Props. Feed your production team and they will give you the good edit. Maybe Kim needs to bring someone a chicken parm sub so she can get some screentime next week. Please give Kim some screentime. I heard a rumor that Kim was only on there so that her 18K Instagram followers would tune in to see her. Give her some burn. 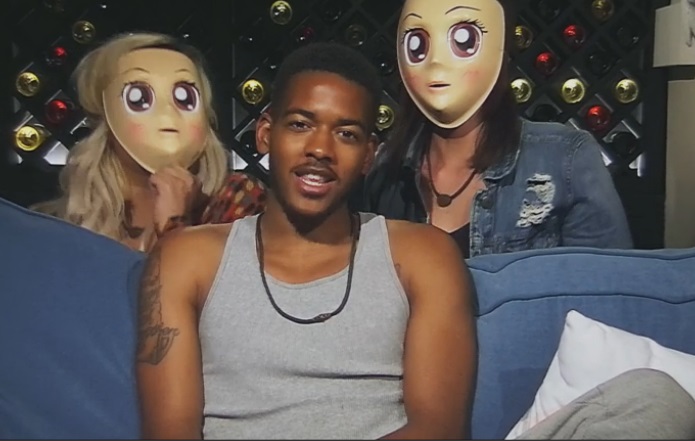