After January 20, 2017, the Republicans will control the White House and both chambers of Congress. They will soon reassert control of the Supreme Court when the Republican Senate confirms Donald Trump’s nominee for the court’s vacant seat. For Democrats, it may be hard to imagine that things could get any worse.

The 2018 midterm elections present one of the most lopsided Senate fields in recent memory. As a result of their successes in the 2006 and 2012 elections, Democrats now face the dubious task of defending 25 of the 33 Senate seats that are up two years from now.

Their job could hardly be more arduous. Republicans will have a target-rich environment, with five Democratic Senators seeking reelection in the blood-red states of Indiana, Missouri, Montana, North Dakota and West Virginia. Trump’s smallest 2016 margin in any of those five states was his 19-percentage point victory in Missouri. These five Democratic incumbents are definitely on the endangered species list. While all of them are tough, battle-hardened campaigners, they are all running against the prevailing winds in their states.

In particular, Missouri’s Claire McCaskill and Indiana’s Joe Donnelly will have a hard go of it. Both won in 2012 after their Republican opponents made catastrophic public comments regarding abortions stemming from rape. McCaskill, who has earned a reputation as a wily survivor, won her race by a very large margin, so it is not by any means certain that she would have lost even if her opponent, Todd Akin, hadn’t made his comment. Donnelly, however, may well have needed his opponent’s error—during a televised debate, no less—to prevail in staunchly Republican Indiana.

Things scarcely appear any easier for Montana’s Jon Tester, North Dakota’s Heidi Heitkamp, or West Virginia’s Joe Manchin, though Tester and Manchin probably have the best hopes of surviving. The plainspoken rancher Tester has repeatedly demonstrated an ability to win Republican votes, and the occasional conservative Democrat can still win statewide in West Virginia, as demonstrated in the Mountain State’s 2016 gubernatorial race. But Heitkamp, who won by 1 percent in 2012 against a mediocre Republican opponent, will have a serious fight on her hands.

Make no mistake, this is crunch time for the Democrats.

Republicans also have a juicy second tier of races to contest, with opportunities to take out Democrats in six other states: Florida, Ohio, Michigan, Pennsylvania, Virginia, and Wisconsin. With the exception of Virginia, each of these states went to Trump in 2016, but Democrats running statewide in off-year elections in recent years in Virginia have faced close shaves. Democrats also need to concern themselves with a potential three-way race in Maine, where independent Sen. Angus King, who caucuses with Democrats, could face both Republican and Democratic opponents.

This long list of targets does not even take into account the possibility of an unexpectedly strong GOP challenge in a blue state or two. Just looking at the list of opportunities already on the table for Republicans, they could theoretically knock off as many as a dozen members of the Democratic Senate caucus.

While it is unlikely that Republicans would sweep all 12 of the most vulnerable Democratic seats, if they could get to eight, they would control 60 seats and be able to block Democratic filibusters. This is entirely possible.

Democrats, conversely, have almost no realistic targets to shoot at in the 2018 Senate races, which will be contested in Arizona, Mississippi, Nebraska, Nevada, Tennessee, Texas, Utah, and Wyoming. Only Nevada, where incumbent Republican Sen. Dean Heller barely won in 2012, looks like it has any potential to be highly competitive, and the next best bet for the Democrats would appear to be Arizona, where no Democrat has been elected to the Senate since 1982, and where Sen. Jeff Flake often strikes a moderate chord. But with Team Blue being forced to defend a dozen or more highly vulnerable seats, it seems unlikely it will have the resources to make a serious play against a Republican incumbent.

Such an unfriendly playing field makes net losses all but inevitable for the Democrats, and if they can get out of the 2018 cycle losing only three or four seats, they should nominate newly-selected Democratic Senate campaign committee chair Chris Van Hollen for sainthood.

By no means can Democrats simply give up on the Senate races and focus their efforts elsewhere; it will take a great investment of time and resources just to keep their losses down. But where the party really needs to focus in 2017 and 2018 is on governorships and state legislative races.

Democrats currently find themselves in the minority in the states and the U.S. House in no small part because Republicans moved aggressively on redistricting following their triumphs at all levels during the 2010 elections.

The upcoming elections, starting with the Virginia governor’s race next year, is the beginning of a four-year period during which Democrats must pick up as many governorships and state legislative chambers as possible. Governors elected in 2017 and 2018, and state senators elected to four-year terms in those elections, will be in office for the redistricting decisions that will take place in 2021 following the 2020 census. The 2019 and 2020 elections will fill out those gubernatorial and legislative rosters, and determine whether Republicans, through control of redistricting, can continue to keep the majority of legislative chambers and the U.S. House of Representatives locked down through 2032.

Make no mistake, this is crunch time for the Democrats. If they cannot reverse their fortunes quickly, they will find themselves in the political wilderness for another decade, hoping only for an occasional victory at the presidential level to prevent Republicans from doing whatever they want nationally. And in the states, Team Blue could scarcely be any weaker than it is now, holding full control (governor and both legislative chambers) of only four states, with a special election in a legislative race to determine whether they will regain a slim majority in the currently tied Delaware state senate.

For all the talk in recent years about the Republican Party being headed toward oblivion, it is the Democrats who now have their backs against the wall. Any more happy talk about the GOP falling apart and Democrats riding a demographic wave to power needs to go by the wayside. Team Blue needs to find a way to win now, or watch Republicans dismantle everything their Democratic predecessors fought for throughout the 20th century. 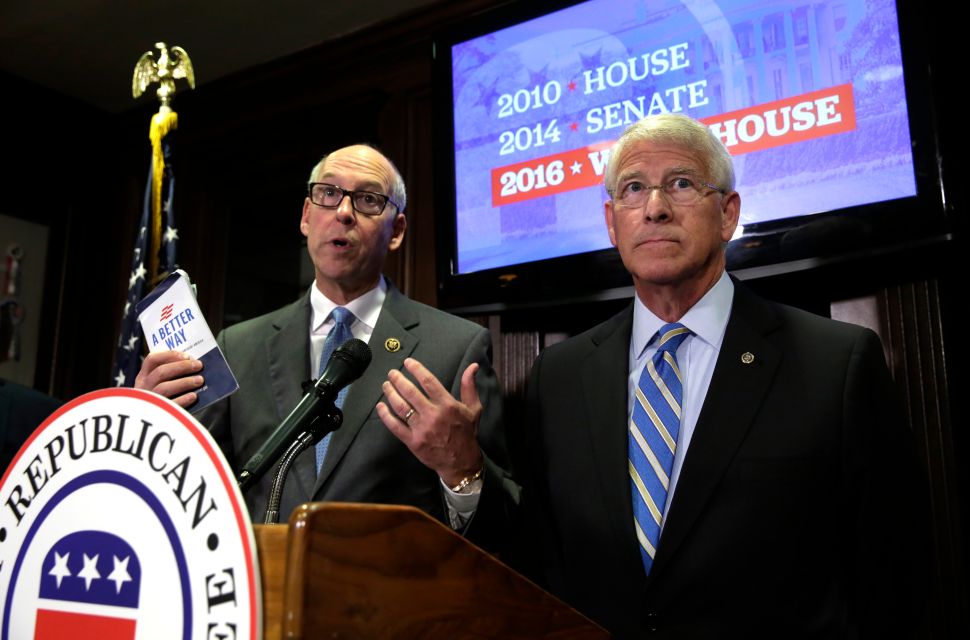