Bernard Maisner, who designs and hand-paints engraved social correspondence with images from peacocks to snakes and  elephants from his studio in Bay Head, New Jersey has long been the calligraphy darling of Martha Stewart. His many clients include Anna Wintour, Oprah Winfrey, Alicia Keys, Katy Perry and former Vogue editor Mieke ten Have. Flamboyant super stars are equally smitten. Sir Elton John engaged him to give flamboyant flourishes to the packaging of his S.E.J.’s candle collection.

Over dinner at Hangawi, a shoes-off “vegetarian shrine” in Manhattan’s Korea town (he had gotten there early to leave one of his engraved calligraphy place cards with a golden hand-painted fish that glimmered in the dim light), the Observer learned that even Mr. Maisner’s hands are sought after by Hollywood when penmanship in action—usually of the Rococo, ornamental or old-timey kind—is called for.

“I’ve often thought the curliques in my work are the result of growing up with curly hair,” said Mr. Maisner.

His hair has the wild, unkempt look of a romantic, irreverent poet or feverish composer and it’s easy to imagine him in the wardrobe department being outfitted in a costume from another time.

Mr. Maisner’s hands have played Johnny Depp in Sleepy Hollow, Daniel Day Lewis in Age of Innocence and Sean Connery in Finding Forrester. He also did the handwriting for documents that Robert Downey Jr. reviews inSherlock Holmes, along with prop work for Gangs of New York.

“I almost wrote in Japanese for the new Martin Scorsese film “Silence,” said Mr. Maisner, “but my hand looked too different from actor Andrew Garfield’s, so unfortunately that did not work out. But I absolutely love working in film and look forward to the next opportunity.” 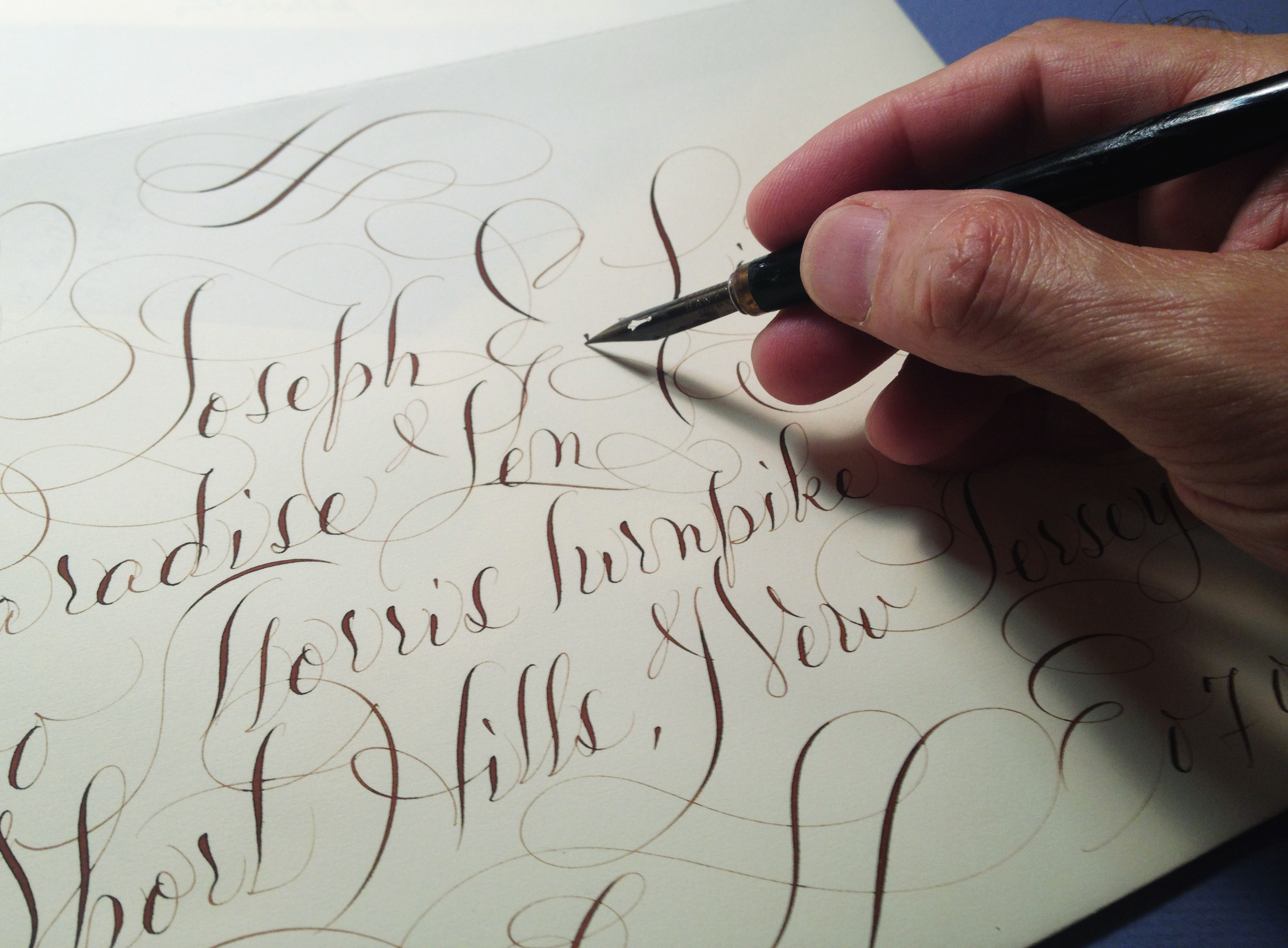 Those opportunities keep rolling in. Despite cursive being phased out of most public schools, his business is flourishing. Or perhaps that’s precisely why it is flourishing.

“People love the low-tech nature of writing as a profound counterpoint to pixels and light coming from behind a screen,” said Mr. Maisner who has hundreds of old letters saved from many decades.

“Very few people even know how to hold a pen correctly,” he lamented. “Once you start looking, you will notice the most contorted ways that people hold their pens in their hands. It’s painful to see. Similarly, we can revive the love letter tradition by writing more love letters…Writing used to be a skill that one studied and practiced, like learning the piano or violin.”

He’s just embellished a font for a perfume for film he’s not allowed to reveal, but what he can talk about are the other objects that debut this December.  “I have always wanted to take lettering off the page,” said the soft-spoken artist, and he has. He’s created shoji screens, lampshades and umbrellas—all aswirl with lettering for Tiffany windows as well as installations for Bergdorf Goodman. Not surprisingly The Neue Gallery has commissioned an exclusive “Ich liebe Dich” scarf and handkerchief in his signature melding of Spencerian and Copperplate. And then there’s his new luxury venture that launched last week, OM with Bernard Maisner.http://www.om-nyc.com/om-with-bernard-maisner

A graduate of Cooper Union, his whimsical work with a pen (he also takes commissions) has left him little time to for his first love, illuminated manuscript making. Mr. Maisner began his foray into social calligraphy and stationery in 2000 after several years of gallery exhibitions (Barbara Gladstone and Holly Solomon to name a few).  He also taught Medieval and Renaissance manuscript illumination methods and techniques and lectured at several museums including the Cloisters Museum, the Metropolitan Museum of Art, the Getty Museum in Malibu, California, and the Morgan Library and Museum, which incidentally has his art work in its permanent collection, as does the Philadelphia Museum of Art.

What surprises him? Surprisingly, nothing to do with Hollywood.

“Considering the fact that I am doing so much calligraphy and writing all the time, you might think it gets boring. The truth is that I remain endlessly mesmerized by the act….I am constantly challenging myself to create new letterforms and letter combinations, and to write with a lighter and lighter touch. I call this ghost writing. For efficiency’s sake, and I mean almost at a molecular level, I try not to lift the pen tip off the page between letters, which saves minute amounts of energy and is the most efficient way to write, hour after hour. The results are almost invisible strokes showing the movement of the pin between letters. They are like tracks in the snow or the distance between the high and low points of the flapping of butterfly wings.”

Meet the Master at Bergdorf Goodman, Saturday December 17, 2-5 pm and watch him personalize your stationery! 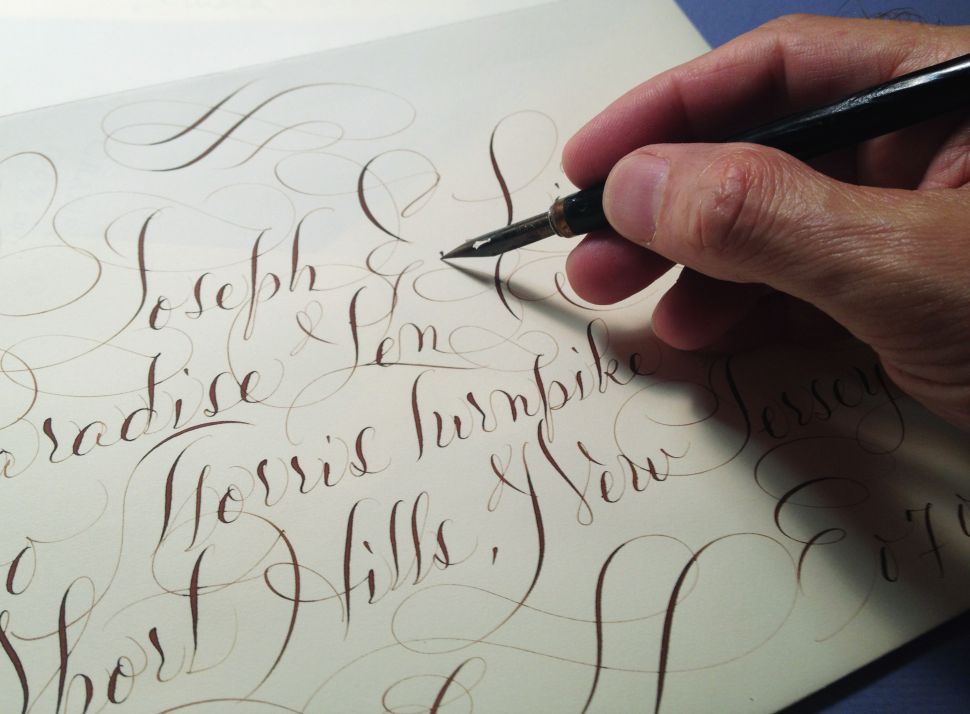